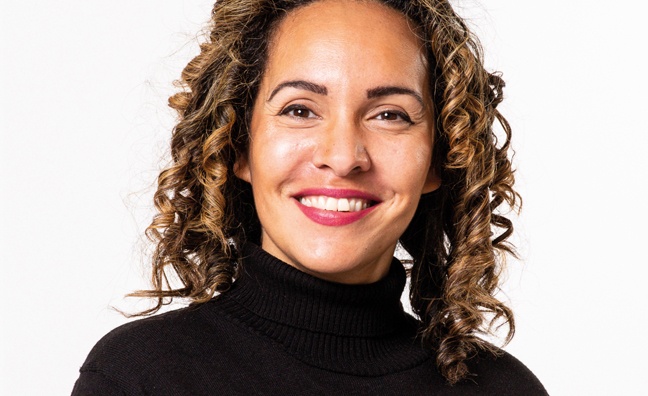 Since 2009, Small Green Shoots has played a unique role in levelling the playing field for young people and new artists from diverse backgrounds who are trying to join the music business. Here, its founder – and Music Week Women In Music Roll Of Honour inductee – Natalie Wade talks about the black-led charity’s work so far, and its big goals for the future…

If it takes a village to raise a child, then Natalie Wade has mastered the art of it. Being the eldest of 13
half-siblings has, of course, helped.

“One of my proudest moments was when I got a job and I could pay for all my brothers and sisters’ school trips,” she tells Music Week. “That was like, ‘Yay, I brought home the bacon.’”

Fast forward to today, and the same ethos forms the cornerstone of Small Green Shoots, a charity she founded and runs with young people from low-income backgrounds – giving them paid training and career connections within the music and creative industries.

“Everybody gets paid at Small Green Shoots, it’s a rule,” she declares. “We’re a complete network, we’ve got each other’s back. If one of us fails, we all fail. I work them really hard, but I don’t micromanage.”

And it works. Her “Shoots” – as she calls them – are taught everything from invoicing and cash flow forecasting to Photoshop skills and are given roles in marketing, PR and A&R for their own outdoor events.

“[One] was with me for three weeks,” she continues. “We put her to work as an artist liaison – she had to make sure artists were on time and that their managers were seen to. She just needed that confidence – she’s now a management assistant over at Modest Management.”

Wade then proceeds to reel off a list of Shoots now working at Disney, EMI, Sony Music and Insanity.

“We set them up for a meeting with someone who does the [role] already, like Nick Matthews at Paradigm,” she says. “One hundred per cent of them have no connections. It’s about who you know; I am the ‘Who you know’.”

It can be challenging at times, she will admit. Most Shoots are NEETS (not in education, employment or training) and some have underlying factors that can hamper their aspirations.

“We had one who was with me for three years,” Wade recalls. “She was academic but from the kind of background where debt is dangerous – debt is a scary guy standing in your doorway on a Thursday and you’re having to lie and say your mum’s in the bath. That’s the story she told me and I know that story, I’ve lived that story. She didn’t want to go to uni because uni meant debt!”

With a little push and help to build a portfolio, the Shoot won a university scholarship.

“It was a bit of a culture shock for her, so we kept her on two days a week while she was studying to make sure she was attending, and motivated – she only got a first!”

Small Green Shoots has taken in more than 30 young people since 2009, and since September 2019 they have helped raise more than £389,000 for artists, organisations and creatives. Beneficiaries have included Jorja Smith, who approached them early on  for funding.

“When I met Jorja her managers were so honest, they said, ‘We’ve had this success, we didn’t realise the first single was gonna get picked up and we just need some money to get the mixing done,’” explains Wade. “We were like, ‘Yeah, we’ll definitely help’. Jorja was preparing to come down from the Midlands to work at Starbucks in Croydon at the time – and look at her now.”

Another example of success came when Wade introduced a then-13-year-old Mahalia to her first manager Matt Ross (Columbia, Sony Music, Sent Entertainment) – and the rest is history.

Building any great vision takes self-belief – but that didn’t come easy for Wade. As a mum-of-one in a career as “someone’s assistant taking notes” at label meetings where nobody looked like her and where she was even mistaken for ‘the talent’, it got to her.

“Because of the way I talk… I felt different in those meetings and I realised I had to play to it because I was never going to pass,” she says, referring to her upbringing on an East London council estate, at odds with her middle-class colleagues.

“I’m half-Irish, half-Jamaican,” she continues. “I remember my Jewish stepdad said to me, ‘What are you waiting for, do it yourself!’ because he comes from a background of business owners. I was like, ‘Nooo!’ and I remember my mum saying, ‘Leave her alone’ – because every Sunday dinner he’d be on at me and I’d get upset because I don’t come from the kind of background where you can take risks. I know what Morrisons extra value pitta bread tastes like, I don’t want to go back to it. But he was just on me. He said, ‘It’s not going to change unless you do it.’ I did and he was 100% right. If you’ve got someone behind you, it’s a game changer.”

Calling on her network of contacts, Wade steadily built a team that reflected the diversity she craved in the music industry she loved. 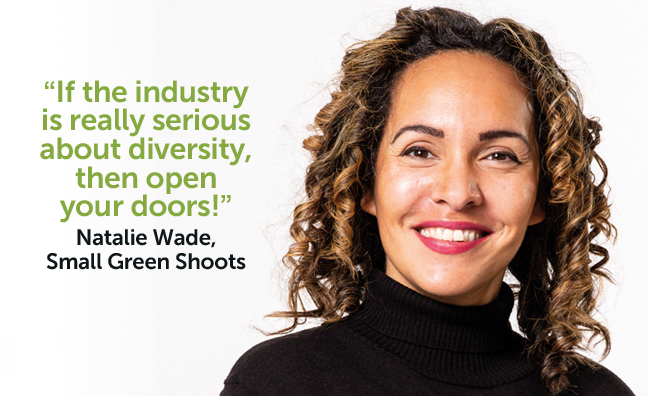 “We have a majority black female board, this is because the Shoots have a say in who our board is,” she says, giving full credit to her team. “Shoots are in our recruitment process so we can’t hire without their consent. It’s been part of the culture from the outset, that they build the organisation and their voice is current throughout. They are constantly informing me of their needs.”

When the pandemic hit, the need for more support intensified. SGS managed to keep every Shoot employed, and they took on three more.

“We had 364 applicants for those three roles,” reflects Wade. “One kid walked from Seven Sisters in Tottenham to Kings Cross in the blazing heat – he was dripping – just to do an interview because he didn’t have the bus fare. There’s so much demand.”

However, the pandemic threw up new challenges too – like the digital divide. For Shoots in lockdown with no computer or Wi-Fi at home, the charity reached out to companies for old laptops and dongles.

“I was delivering them on foot with my backpack,” says Wade. “One of our old Shoots works in IT at a law firm and was reconditioning them for me as a favour to Small Green Shoots. It comes back into the fold.”

Then there was the task of keeping Shoots motivated in a pandemic, creating work when all their funding projects had been wiped out.

“When some of them have underlying health conditions or are single mums with no outdoor space, or from chaotic households, it’s hard for them to work remotely,” Wade notes. “We have Zoom meetings everyday at 10am and 4pm, and everybody has to rock up – no-one can be late, and there can be no dark cameras – everybody shows themselves. We’re in it together. Also, we need to make sure they’re doing OK.”

Pastoral care runs through the veins of the charity. But after the global Black Lives Matter protests, they were tested.

“Blackout Tuesday was the hardest day I’ve ever had at Small Green Shoots,” says Wade, fighting back tears. “The Shoots’ doubts, fears and anger all came out. It was horrible. They called me a liar. They were like, ‘Why are you making us think that we can get somewhere when we haven’t got a chance? You’re just wasting our time.’ It was really hurtful but I had to see where they were coming from because I’m so passionate about them moving forward. They can become the decision-makers that change things.”

For that to happen, Wade believes money alone won’t fix it – but it helps. On the night she won the Unsung Hero Award at the Artist And Manager Awards in 2018, Simon Moran (SJM Concerts) introduced himself and pledged to give them £10,000 year-on-year.

“That paid for us to have a home at Tileyard,” says Wade. “He just quietly does it and the Shoots do him a video every six months showing what they’ve done.”

Then there are sponsors like Concord Publishing  and PPL – each pay for a Shoot to train with Small Green Shoots and offer secondments in their company.

Does she think the industry is doing enough?

“If the industry is really serious about diversity and levelling the playing field then open your doors!” Wade argues passionately.

“I want all of these organisations to meet the Shoots. See what diversity looks like and how brilliant it is. Then I want them to take my Shoots back into their buildings, incubate them, sprinkle some more water on them and watch them grow like I do. It breaks down barriers. It will inform your organisation simply by having them. Don’t just say, ‘I haven’t got anything at the moment’, create something if you really want to make change. If you’re serious about it and not just ‘Black Lives Matter just for Christmas’. Give your time.”

GOING GREEN
How – and why – you should get involved with the Small Green Shoots revolution...

“As Nat focuses on ensuring the survival of Small Green Shoots throughout this pandemic – while helping the Shoots deal with their daily challenges – it’s the job of myself and the board to ensure that we rally support from the music industry. One-off donations are great, but in order to ensure long lasting change, we urgently need partners to pledge guaranteed amounts for a minimum of three years. This investment doesn’t just help fund future Shoots, it genuinely helps the industry as well. Companies get interns and young staff members that are far better prepared than those who have followed purely academic routes, plus a work force that better reflects the society in which we live. Not to mention SGS funds young artists before they have the statistics that the industry often needs to see before signing them. There are countless other ways in which firms can help, from mentorships, internships, social-takeovers and more. My own company, Entertainment One, along with parent company, Hasbro, recently held an entire day of programming, devised by the Shoots themselves, to help them understand the vast array of jobs that the entertainment industry can offer beyond purely being an artist.”
Gary Mandel (VP, creative, Entertainment One Music UK/SGS board member)

“Looking to the future, Small Green Shoots would like to see its model for vocational training rolled out nationally and become a recognised alternative by the government. In a snapshot, this would begin with a considerable uplift in our financial resources. From here we would begin by increasing the number of regional pop-up offices we can deliver annually and desk spaces in our London office to take on more young Shoots. We’d also broaden our ability to address the hardship needs that can prevent Shoots from progressing at a consistent rate – examples of this include helping with family meals, and expanding the computer drive we ran in 2020 when many struggled to work from home because of a lack of tools. We are on a mission to develop professionals from various backgrounds that bring value to the music industry. If you have similar aims, we are here, with the kettle on, ready to work with you and develop new Shoots!”
Eunice Obianagha (chairwoman, Small Green Shoots Board Of Trustees)