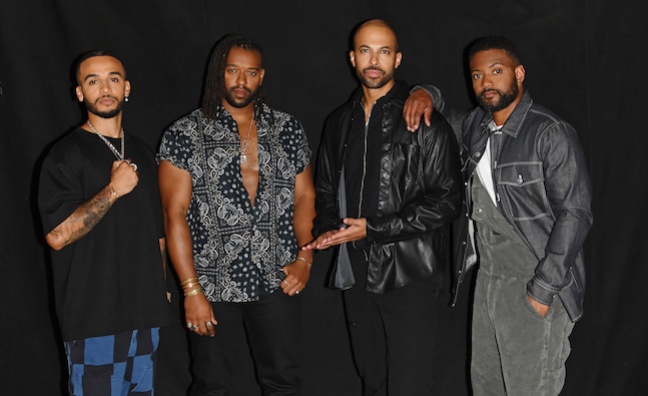 The boy band have returned after eight years with a new album for BMG and a tour promoted by SJM, which launched at The SSE Hydro, Glasgow in October and included four nights at The O2. The Beat Again Tour dates were rescheduled from 2020.

“We were actually quite conservative in what we put on sale to start with because of the fact that they’ve been away,” said Gallagher. “We weren’t taking anything for granted.”

“We put 15 arenas on sale initially, and within 48 hours we’d practically doubled that and gone to 29. We didn’t know how successful it would be. We were still ambitious that we wanted to fill arenas, but we had no idea that the response would be like that.”

Their self-titled No.1 debut album has sales of 1,469,139 and their subsequent studio albums all made the Top 3.

Gallagher said that Take That are the “benchmark of the ultimate comeback”. JLS have already booked more than double the number of arenas compared to their previous tour in 2013.

“This is not just, ‘Let’s make some money out of a comeback tour’, this is about how they move forward as a band and what the next chapter is for them,” she told Music Week. “In a pandemic, they’ve sold just shy of a quarter of a million tickets, it’s totally overwhelming for the boys. They did not expect it, it’s surpassed everyone’s expectations.

“We’re ambitious to try and grow the live audience and international markets are something they really want to explore.”

JLS returned to the same management firm who steered them to multi-platinum sales and sold-out tours the first time around.

“They’ve always had a great relationship with Richard [Griffiths] and Harry [Magee], there was no animosity when they broke up,” said Sarah Gallagher. “It was just a no-brainer. They came straight to Richard and Harry in December 2019, they had decided the time was right and they said, ‘We want to do this.’”

JLS have launched the campaign for their first studio album since 2012’s Evolution with TV appearances on The One Show and National Television Awards. BMG will release 2.0 on December 3.

“We know that we’re competing in a busy year because so many people held back, but we feel really bullish about the JLS release,” said BMG marketing director Louise Hart. “The title says it all – it’s a new grown-up version of JLS.

“We thought it was important to allow the tour to happen and get some pre-orders. We feel very confident about putting it out at the beginning of the Christmas season, post-tour, and our retail partners feel equally confident.”

BMG will tap into the gifting market as well as the JLS fanbase.

“There is lots of scope for coloured vinyl, cassettes and signed editions,” said Gallagher. “We felt that was a market that BMG were able to really harness.”

As well as LP co-writes by Wayne Hector, TMS and Lostboy, lead single Eternal Love was penned by Ed Sheeran and Steve Mac.

“We all knew that Ed grew up as a massive JLS fan,” said Modest! head of A&R Ali Fletcher. “He originally wrote Lego House with JLS in mind. I think there was some unfinished business for him, he really wanted to write a song specifically for JLS, so Ed and Steve [Mac] got in the studio. They both messaged the boys to say, ‘We’re not leaving until we’ve written something for you’, and from that came Eternal Love.”

JLS have returned to a transformed environment for recorded music, and their team are working to make them a streaming act. The group have 1.2 million monthly listeners on Spotify.

“It’s super-exciting because it just means that we’ve got so much more scope to be creative,” said Modest!’s senior digital manager Louise Healey. “We hit up all the different streaming platforms when we announced the tour and they were massively excited.

“It’s a new world, but one that we’re really excited about. The fanbase are there and they’re ready. We saw Spotify followers and monthly listeners triple on the day that we announced them coming back for the tour, so we knew that there was a massive appetite for people to stream their tracks.”

Beat Again has 6.5 million audio streams in the UK so far this year, as the band’s catalogue on RCA gets a boost from their return.

“We’ve had numerous conversations with Sony and they’re lending their support where they can,” said Healey. “They’re really interested in how they can lean in and how we can all work together with BMG to make the most of it.”

Modest! and BMG are looking at guest features on future singles to help reach new fans on DSPs and maintain momentum in 2022.

“It takes longer, but the exciting thing is that when you build something and you’re in it for the long haul, you’ve got a strategy to grow it,” said Gallagher.

“We definitely have a long-term strategy. The boys have always worked hard and they’re very aware and realistic that they’re in a different marketplace this time. They’re prepared to put in that graft to reconnect with their fanbase in this new era.”