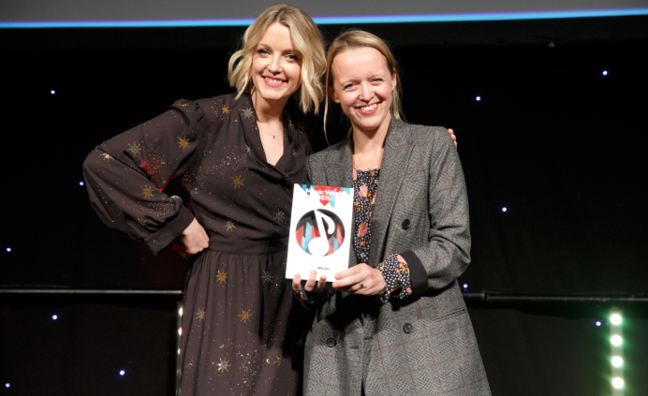 What happens when you get well over 1,200 people – comprising the industry’s top execs, artists and leading talent from every sector of the biz – together at the Grosvenor House Hotel? Simple. The Music Week Awards 2018.

It was a night of unforgettable moments. Returning host Lauren Laverne was on hand to give a run through the past 12 months in the industry, delivering gems like: “People say that streaming will do for music what Facebook and Twitter have done for media.

Give it away for free and put fascists in charge. I’m kidding. Make it instantly accessible, and shareable amongst a global community.” Zing.

That’s to mention nothing of the emotional tributes paid to both George Michael and Avicii and, in the form of Coda Agency’s Alex Hardee’s joke-infested acceptance speech (“I’ve always said agents are overpaid and under-skilled. Don’t deny it.”), the birth of a possible new stand-up comedian in the making.

Ultimately, however, the night very much centred around fierce competition in 24 categories. Here Music Week speaks to the winners to find out what their victory means and how they pulled it off...

“Honestly, it feels slightly surreal because I feel like I’m just getting started. It’s a lovely tribute, I’m very pleased and it’s a very nice gesture from Music Week. It’s slightly intimidating, it’s a lot to live up to.

I’m going to give [the Award] to my kids, so it’s going to live in their room, I think.”


Award: MANAGER OF THE YEAR

“It’s a great recognition for everyone that has worked on this Ed campaign to be fair. That was reflected in a few of the other awards, too. I’m not someone who ever wants attention – but I’m grateful and humble that all the hard work has been recognised.

It’s good to know it definitely wasn’t because my appearance would have added glamour and kudos to the event. We have had an enormously successful year and have retained the attitude and work ethic that has been there since day one about doing what we feel is right and fair in all we do.”


“He absolutely deserves it – no one deserves it more than him. He’s often overlooked but when he does get offered the honours and the praise and everything else, he very often honours the rest of the team, he’s very selfless with his success.

“We’re ecstatic, we’ve worked really hard over the last few years to turn the company around. We’ve worked hard to bring the company into the mainstream.

We’re trying to be better to fans. We have a face value resale that is verified. We’re trying to focus more on fans. We’re all fans and we want to do what’s right for the customers.”


Award: PUBLISHER OF THE YEAR

“I’m thrilled, genuinely surprised. We’re a big company and a successful company but you don’t take anything for granted. So it’s always a thrill winning.

Publishing is very competitive, there’s a lot of new players so it keeps us on our toes, it motivates us. We have to keep innovating, we have to keep changing.

Competition is good, I think. Anybody who thinks it’s an easy ride – or as Alex Hardee [of Coda Agency, winner of Live Music Agent] put it, a ‘scam’ – they are very wrong. It’s a tough business.

“I wish I had a grand strategy for market share, every day you come in and do what you do best. You appreciate good music, we’re lucky to work with incredibly talented people.

Ed Sheeran alone last year was probably a few points of that market share, so special thanks to him.

We just do what we can every day and try and work with the best artists and work as hard to create some great copyrights going forward.”

“I really am surprised. I think the nominees this year were incredible for British music, Liam Gallagher, J Hus, Ed Sheeran, Stormzy who’ve come back with a No.1 record. It was a hugely competitive year.

We did our best and working with somebody like Stormzy… I think everyone knows that he’s a flipping force to be reckoned with. He’s a dream.”

“The thing for me is that there are so many negative connotations associated with grime because of where it’s come from and the areas it was borne out of.

And the campaign was about diluting and diminishing those and putting Stormzy in positions that people wouldn’t have seen him in before, giving him the opportunity and platform to express himself in a way that wasn’t diluted and sabotaged, almost, by a lot of mainstream media.”

“It’s always been in the family, so we’ve always been really happy for Atlantic. But I don’t think anyone expected it to not be them again this year [Atlantic had won the previous nine years], so yeah – nice!

Dua Lipa and Liam Gallagher have just been amazing to work with, so I think they have done all the heavy lifting for us.”

“Someone asked me what would be your golden rule for a brand partnership, and it’s just authenticity. It’s a team effort and everyone wants it.

I work in a place where we care so much. I know people work hard in this industry but we work so fucking hard.

You can create a good campaign but if you genuinely care about it then it’s going to be 10 times better.”

“It’s a good feeling – I feel very proud of the team and proud of what we’ve achieved. I just think we earned our commercial partners’ respect. If they respect the job we did and what we achieved as a sales team for Warner Music, then obviously that means quite a lot to us.”


Award:  FESTIVAL OF THE YEAR

“It’s always lovely to win, I think 2017 was one of our best, it really has to be. Across the site there were so many amazing sets, lots of special moments, there were very few production issues, technical issues or weather issues.

It was the lowest crime we’ve ever had and it was a really amazing atmosphere – really different to the Brexit year! You think how much the mood changes, it was a really good mood. It was just after the election.

We want [festival goers] to have the best possible experience and we want to support new music and follow that through all the way up.

There were lots of big moments for new acts last year, Dua Lipa is an example of someone who really had that moment.”

“We’re fucking over the moon. Polydor A&R has been youthful, dynamic, completely in tune with the market, it’s been fresh and it’s because of the team, they’re fucking great. We’re not about data, man. We all get on.

I’ve been in A&R departments where everyone hangs on to their own thing and there’s not much sharing, but we’re very collaborative and that’s the key.

There’s loads of great new music around but it’s getting harder to get it through, everyone knows that.”

“It’s good to always have a bit of a laugh and not be too serious in speeches isn’t it? No, I wasn’t surprised – I made a prop! It’s two years out of four; I know how Manchester United used to feel. Why have I won? I’m very good at the old bribes.

This year’s been [about] Liam Gallagher, Rag’N’Bone Man… We formed a partnership with the Independent Talent Group for film and TV, so we’ve actually got Liam Gallagher, Sia, Ellie Goulding, Antony Hopkins, Daniel Craig and Alan Partridge on the same roster!”

“It’s just absolutely amazing, and I just wish George could have been here to have seen it because he would have loved it, I’m sure.

We hopefully changed the way people look at catalogue, it wasn’t just a reissue, it became about so much more than that – it was about a legacy. I hope that’s why we won.”