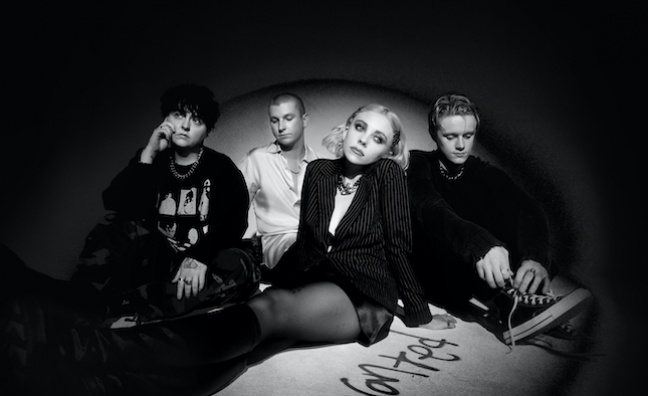 The new album is total pop-punk, a move away from the indie sound of your previous two records. What prompted that?

“I think it’s all about growth and finding what you love and want to be as an artist, and I think we grew a bit tired of the indie sound. We’ve always loved pop-punk and alternative music and it felt like we were ready, finally, to move in that direction with this third album. Art in general is always so influenced by other things, and I think the most important thing is to just create what feels natural for you. It was great working with [producer] Zakk Cervini; he’s become a good friend of ours and I couldn’t have asked for a better producer for this record. He made the whole experience so fun and lighthearted. Usually I’m so stressed when recording and I rarely enjoy it, but with him it was so easy and so natural. He had a huge influence on this record too and really helped us push our boundaries.”

The themes on this album are more personal and you’ve been open about your own relationships with women, and likewise Ciára Doran [drummer] shared the story of their transition. Is there enough LGBTQI representation in music?

“Not yet – but I think we’re heading in the right direction. It’s scary, and even just writing music and your feelings for the world to see is kind of terrifying; it’s like giving them your diary and being like, ‘Hey, read away!’ As a band and as people, being part of the queer community means that we know how it feels to not have that representation, so we knew we had to be honest. Even though that’s terrifying for us, it helps so many other people, which makes it worth it. Feeling unwanted, to me, means feeling like you’re not accepted and that you aren’t good enough. I think I’ve struggled with that my whole life. I always have that sense that I’m not good enough, so I wrote this album for everyone who feels like me. The music industry could be more supportive of different voices by accepting artists for who they are. Care less about the paycheck, and more about what the artist is saying.”

It’s like giving the world your diary and saying, ‘Hey, read away!’

You were on the cover of Music Week in 2018, in our new music issue. How do you reflect on your breakthrough since then?

“Honestly, it’s hard to even capture how much buzz or success you have when you’re in it. I always get worried that people won’t show up or won’t buy our record… So it still makes me super-happy when that’s not the case!”

You’ve been with Dirty Hit for three years now. What makes the label a good fit for you?

“Dirty Hit are very supportive in allowing their artists 100% of the creative direction. They trust the artists’ vision and I really admire that. I hear these horror stories of major labels forcing musicians to be something they aren’t but Dirty Hit have never done that with us – they just let us do our thing.”

How would you describe the landscape for guitar bands at the moment?

"I feel like guitar music and bands are really coming back around, which is such a relief! I turn on the radio now and actually hear guitars which is heaven to my ears. I love guitars and always have so I’m so thrilled they seem to be having a moment again."

What would be your message to young people who want to make music?"

Stay authentic! Prepare yourself to be in for a ride, that’s for sure. But enjoy every moment and don’t take it all too seriously have fun!"