Starter for 10: Fran Healy on Travis' return to form 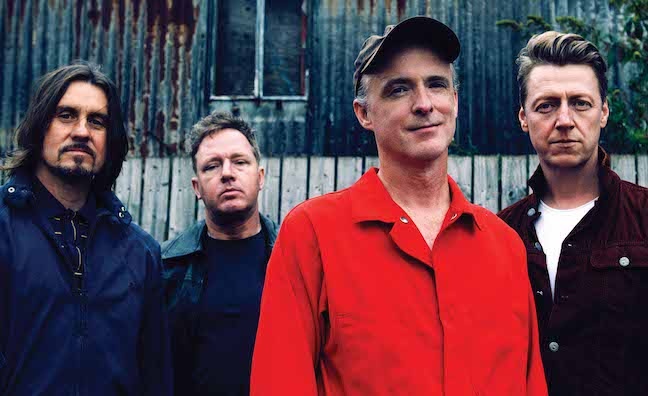 As Music Week reveals that Travis have split with Wildlife Entertainment after 25 years, here's a chance to read our recent feature on the band's final campaign with their longtime management team. Read on for the full story behind the 10 Songs album with frontman Fran Healy, BMG's Alistair Norbury and Wildlife Entertainment's Emma Greengrass...

It’s two decades since Travis scaled the Britrock mountain on the back of all-conquering second LP The Man Who. But in sublime new album 10 Songs, they might have just made their finest record since. Here, frontman Fran Healy, label BMG and Wildlife Entertainment unwrap a campaign where thinking outside the box has been a necessity...

How on-brand for the horror film that is 2020 that the latest chapter in the Travis story should be written on Friday the 13th.

Back in the ominous, pre-lockdown hours of March 13, the Scottish rockers’ LA-based leader Fran Healy was putting the finishing touches to their upcoming ninth LP, 10 Songs, in RAK Studios, St John’s Wood. With the US looking certain to extend its coronavirus travel ban to include the UK, the prospect of the frontman being stranded in London was growing increasingly real by the minute.

“I got lucky, because we finished the album on the day that things started to switch,” explains Healy, speaking to Music Week via Zoom from his Californian home. “We were a week into mixing the record and I was going to stay another week and a half, but I rebooked my plane ticket. I had to get home because I felt in my gut that I would probably be stuck in Britain. So I did my last vocal, went to bed, got up at 4am, went to the airport and flew back.

“As I was sitting in the plane I was reading the news and that was the day they shut down flights from Britain going into America, so I just made it out. I came back and did 14 days’ quarantine and in that time mixed and mastered the remainder of the album. Then I came out of that and I’ve never been so creative in my life. I haven’t stopped, it’s been really cool.”

The enchanting animated music video for 10 Songs single A Ghost, directed and drawn by Healy (with cinematography overseen by the singer’s 14-year-old son Clay), is a case in point. “It’s inevitably been really difficult to try and set it up through this whole period, but Fran has done an amazing job,” says Emma Greengrass, MD of Travis’ management, Wildlife Entertainment. “He had an idea for the video for A Ghost, then lockdown started and three weeks later he came out with the finished video. We’ve had such an incredibly high quality of creative asset for the whole campaign despite the awful time with Covid.”

A former Glasgow School Of Art student, Healy also assumed video directing duties for the instant grat Valentine and new single The Only Thing, which features Susanna Hoffs of The Bangles (the unlikely duet was arranged after the pair struck up a friendship on Twitter).

“I find it a lot easier to make films than to write songs,” reflects Healy. “Songwriting doesn’t feel creative to me. When you write the song and then go into the studio and record it, then it gets creative. But before that point it’s like fishing – you just wait and wait for a little nibble and then you pull it out. The best bit [about being in a band] is the first couple of years because you’ve spent 23 years writing your first two albums. After then, you get about a year to write a record and that’s not enough time to live with melodies and let stuff bubble up.”

The album’s title is a nod to the modern trend for songwriting teams (Music Week recently revealed the average number of credited writers needed to pen 2019’s biggest hits as 4.77) – a subject Healy addresses with passion.

“In the age where you get 10 guys in a room writing one song, this is one guy in a room writing 10 songs,” he says. “We’ve got to respect our industry and that’s what it is – an industry – and that goes back to the time of [US hitmaking factory] the Brill Building and collaborative writing. But I do think 10 people writing one song is a little bit extreme. Personally, I think two people is as many as there should be because one does the melody and one does the lyrics. The 10 people thing is a little bit too industrial, but it’s a job and it powers the industry.

“The sound of records is just off the scale these days, but there’s no soul to things anymore – there’s no emotion; there’s very little honesty and truth to it – because there’s a conveyor belt in the commercial land of songs. There’s also the non-commercial land of songs, which is where I come from and I try to straddle the two. But when you put my song next to anything on the radio it looks like different wallpaper and it’s always been like that with Travis.

“We made a documentary called Almost Fashionable [2018] about how we get pilloried a little by critics, and I don’t think they actually realise how punk we are and how radical it is these days to write a simple song from your heart. The reason nobody does it is because it’s fucking hard. Me and loads of other songwriters are still leading that charge of sitting at the end of your bed and mining your gut for things that have happened in your life that maybe people can relate to, and it takes fucking ages. I’m sick of getting booted in the balls for being a fucking songwriter, I think people should stick up for us more.”

Radio has certainly stepped up to the plate – A Ghost gave Travis their biggest airplay hit in 17 years when it peaked at No.12 earlier this summer – boding well for its parent album, out October 9 via their new label partner. After Where You Stand (2013) and Everything At Once (2016) dropped on Travis’ Red Telephone Box imprint and Caroline International, respectively, 10 Songs will be the group’s first to be released through BMG.

“We got off to a great start,” BMG UK president Alistair Norbury tells Music Week. “The key is going to be the continuing dropping of content – both audio and audio visual – in the coming months.”

“BMG are really cool, they just leave us to it, and I think they’re quite happy with what they’re getting,” remarks Healy, who also co-produced the record.

“They’re getting Travis at a moment where I’ve just clicked back on. I’ve been bringing up my son for 14 years and I have to admit that, on the songwriting, I’ve had my foot half on the accelerator and half off. This is definitely a return to feeling fired up and like I’ve got this thing to prove. I’m feeling competitive.”

“We’ve been building the band back up over the last two albums and the sales have increased each time [see panel, left], so it feels in a good place,” notes Greengrass. “Hopefully we can take them to the next level and back to a level where they were.”

They've delivered their strongest album since The Man Who

Travis’ commercial peak came courtesy of 1999’s BRIT Award-winning second LP The Man Who (2,699,929 sales, OCC), which led to them headlining Glastonbury 2000. Touring the seminal LP in full in 2018 lit a proverbial fire under Healy. “It definitely reignited that feeling of, ‘I need to get my shit together and make a record that matters’,” he reveals. “So that was the beginning of this poke up my arse I’ve got at the moment.”

“It’s our sweet spot to some extent,” admits Jamie Nelson, the label’s VP, A&R (new recordings). “I’ve always looked at Travis from a distance and seen how much they’ve connected and resonated with audiences over the years.”

“We are set up to work with iconic artists,” affirms Norbury. “We have a list of acts that we would love to work with and both Travis and [Wildlife Entertainment CEO] Ian McAndrew, as a manager, have been on that list for a long time. When the opportunity came up – and we felt the appetite and the aim of the band matched ours – we jumped in.

“They’ve delivered their strongest album since The Man Who and we’ve had this huge fortune that Fran has driven all the creative in lockdown, so we will continue to tap into that. They work with management who understand the modern age and also still put releasing records as being as important as all other aspects. That is particularly relevant in the world we live in because now, guess what? We’ve got longer to work with the band than we thought. Fom a label perspective, we can now look at an incredibly long campaign before touring will recommence.”

The quartet, who have a UK tour booked for April/May 2021, have more than 2.1 million monthly Spotify listeners and retain a loyal overseas fanbase. “We’re seeing widespread support internationally, with the key regions being Europe, Latin America and Mexico, some nice radio traction in the US and a lot of enthusiasm coming from Japan,” says Terry Felgate, BMG’s VP, global repertoire and marketing.

“They’ve been working around the restrictions of the Covid pandemic to deliver us content that travels well. It feels really buoyant.”

Felgate suggests the band’s streaming figures display greater potential outside the UK, with their physical sales taking precedence in Europe. “If we maintain that profile through to the end of the year then my long-term ambitions are to be able to see how we can work the record across 2021, when hopefully live comes back into play,” he says.

Greengrass is setting her sights simply on bettering the No.5 UK peak achieved last time around. “It’d be lovely if this could be Top 3,” she smiles.

“We want to have a very strong chart entry, but what’s more important is that we have an album that hangs around and has a life beyond week one – and not just in the UK,” asserts Norbury. “It’s important this resonates internationally, so we have very high expectations.”

“It’s about delivering the project back to their base so they get the opportunity to reconnect there and hopefully highlight that to potential new fans,” suggests Nelson. “When the writing is as good as it is on this record, they’ll always find new fans.”

Healy concedes it is rare for an act to still be producing work to rank alongside their best this deep into their career. “Unless you’re Paul Simon,” he counters, with a grin. “I’ve always secretly had this thought of, ‘OK, Paul Simon did Graceland when he was in his 40s’. I still feel like I’m learning and I stil feel like I’ve got songs in me, so I don’t know...”

And despite all the uncertainty of the current climate, Healy prefers to focus on the positives.

“It is a watershed moment in our history,” he declares. “We’re living through history right now. For better or for worse, that’s what’s happening and you can either sink or swim, and just get on with it and adapt. And I think that’s what’s happening, so it’s cool. “Travis have never been fashionable. If we ever are, then it’s by complete mistake. But if we do get lucky and the wind is in our sails, I think we’ve got one of the best records we’ve ever made to go with.”