The Man Comes Around: Rag'N'Bone Man reflects on his big breakthrough 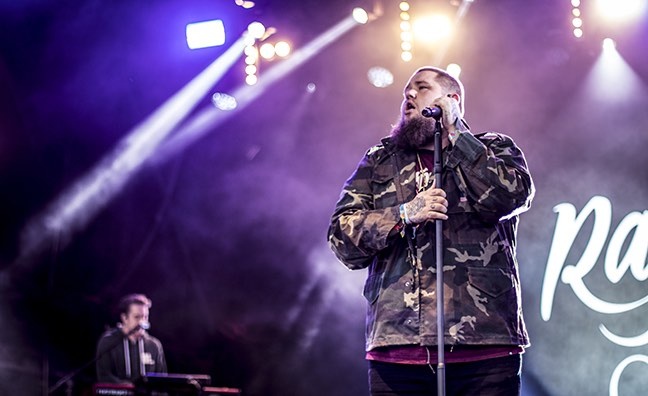 As Rag’N’Bone Man confirms details of his long-awaited second album, Life By Misadventure, here's a chance to read our interview from 2017 on the million-selling debut album campaign...

As Music Week's Breakthrough Artist Of The Year gears up for a New Year's Eve Hogmanay performance in Edinburgh, here's a chance to read our interview with Rory Graham and his team from the current double issue of Music Week...

The extent to which Rory “Rag’N’Bone Man” Graham’s life has changed over the course of this year can be summed up by an encounter with Hollywood royalty.

“Hugging Whoopi Goldberg and getting a seat given to me by Denzel Washington was pretty bananas,” he chuckles.

“When I did The Graham Norton Show, one of the security guards came to my room and said, ‘Whoopi Goldberg would like to meet you, if you’d like to see her?’ I was like, ‘Of course I fucking want to meet Whoopi Goldberg!’

“She said, ‘Can I get a hug?’ I was really starstruck and I gave her a hug and said, ‘I like hugs’. Then I thought, ‘What a dickhead! Who says that?’ It was a weird moment, but she was lovely. Denzel was on the show as well and he’s literally my favourite actor in the world ever, so it was very cool.”

That’s not to say fame has changed Graham, far from it: he remains the same humble, good-humoured, gentle giant Music Week  first caught up with in the autumn of 2016.

“He is such a dude!” exclaims Stacey Tang, co-MD of Columbia Records. “It makes the job so much easier when you’re working with someone who’s an honest to goodness, genuinely awesome human being. To be part of that campaign with him, to watch his experience and his career grow, reminds you of why you do this.”

Rag’N’Bone Man’s debut LP Human (Best Laid Plans/Columbia) is approaching triple platinum status, with sales of 857,197 (first-week sales of 117,101 were the third biggest of 2017). It remains entrenched in the UK Top 10 more than 10 months on from its release.

“Breaking an artist as special as Rory is momentous to be a part of,” says Columbia UK president Ferdy Unger-Hamilton. “To start my time at Columbia working with an artist like him has been amazing. It’s so hard these days for artists to come through, but when you find someone like Rory who does, it makes the achievement even greater.”

To Polly Comber of Black Fox Management (which partnered with Elton John’s Rocket Music earlier this year), Graham’s ascent has come as no surprise.

“We always knew from watching people’s reactions at the earliest small live shows four years ago that we were working with someone very special and that Rory was going to have a career,” says Comber, who represents the singer with colleague Josh Smith. “The audience has obviously grown but, in a sense, it’s the same audience we glimpsed way back then.”

Tang reflects: “Meeting Rory, spending time with him and hearing that voice, we knew what calibre of artist we were dealing with from the very beginning.

"The live shows were growing each time - and not just in London - so all the things that you would look for, as a marker for something being received well and having potential, were there.”

Nonetheless, the sheer enormity of his impact has shocked even seasoned observers. “He has surpassed all of our expectations and has moved into a kind of little mini league, just below the big boys, but above those that are considered to be ordinarily successful these days,” notes Columbia A&R director Julian Palmer, who signed Graham a few months before the star’s Wolves EP came out in 2014.

“When I first saw him live, he was already pretty proficient and very clear of who he was as an artist - and that’s because he’d had a career before this one, if you like. Growing up in the hip-hop community in Brighton, he’d already moulded himself into a very confident,capable live performer, so he was ready for it.”

“I couldn’t be happier for Rory,” adds Sony Music UK and Ireland chairman and CEO Jason Iley. “He completely deserves all of his success. He’s living proof that true talent will always out.”

Graham, 32, credits the label for allowing him to remain true to his artistic vision. “I’d been an artist for a while and I was like, ‘This is what I’m about - if you sign me, you sign me like this,’” he says. “My voice is rough and raw and I write miserable songs. You’re not going to put a suit on me and turn me into CeeLo [Green] or whatever.

“They’re probably frustrated by me a lot of the time because I’m really good at saying no. I didn’t walk into this deal at 18 or 21, I had a very good idea of how I wanted to be seen and heard, and anything that isn’t synonymous with my idea of myself as an artist, I just say no to.”

“He doesn’t do things that he feels don’t suit who he is and we respect that and work with that,” affirms Mark Collen, Sony Music UK’s EVP, international operations. “We’re well over a million albums outside the UK, which is phenomenal, and the story is continuing to build.”

A crucial chapter in that story is, of course, the album’s brooding title track. Human broke big at home and abroad towards the end of 2016 and ended up as the Christmas No.2.

To date, it has moved 1,362,754 combined units in the UK, according to the Official Charts Company.

“I’ll be totally honest with you mate, I didn’t think Human was going to be the song,” admits Graham. “Other people were more gassed about it than I was. I thought it would fall a bit flat with people and Skin would be the one.”

“Skin was the strong song that I had if Human didn’t work out, so it was cool that we had that to back it up with,” continues Graham. “I was like, ‘[Human] is a cool song but I don’t know if it will do well or not.’ But I guess everything’s a punt, there’s no surefire hit.”

He elaborates: “I thought I’d always stay underground. Even though I signed to Columbia, I always thought I’d be under that blanket and would never properly break through, which I didn’t mind.

"I was fully cool with that and I was still playing to big audiences. It’s three years since I sold out Scala and you could still make a good living at that level but I thought I might as well give it a punt because I’d put enough into it. I guess I didn’t have quite as much belief in myself as others did.”

Collen highlights another significant aspect of Graham’s appeal – his authenticity. “Everything has to start with the voice - his voice is extraordinary and it stops people in their tracks,” he says.

“But there’s a humility about him, an authenticity. What connects the image and the voice is his extraordinary authenticity that comes across. There is nothing not real about this guy and you can’t underestimate that.”

“Not very often does someone come along who is so easily identifiable both in his music and visually,” notes Unger-Hamilton. “The team have worked extremely hard and the success is indicative of that but, ultimately, Rory is an incredible singer and when you have a great singer, performing great songs, people want to listen.”

“There’s been an innate honesty in this campaign, whether it’s in the songs, the artwork or Rory’s live performance,” adds Black Fox Management’s Smith. “There are no gimmicks, and little distraction from the music itself. And so when people hear Rory’s voice, it connects in a really powerful way.

“Rory has an incredible talent, so when people just see him sing, whether that’s through touring or big television moments, there’s invariably a big and instant reaction. Our strategy in a sense has been to avoid doing anything that distracts from that - and simply to make sure people see him perform.”

With success, has come adulation and honours (BRITs Critics’ Choice & British Breakthrough Act, to name but two) - the latest of which is the title of Music Week’s Breakthrough Artist Of The Year - yet Graham remains as grounded as ever. “You can’t let trophies define you, but it’s pretty cool to win,” he says.

Rag’N’Bone Man’s live trajectory has been equally seamless. Working with promoters Live Nation, SJM Concerts and Kilimanjaro Live, he played a stack of festivals in the summer and concert halls in the autumn.

Graham will star at Edinburgh’s Hogmanay New Year celebrations. And has his biggest shows yet booked for 2018, including dates at London’s Alexandra Palace and Manchester’s Castlefield Bowl.

“Success is valued differently by different people,” observes Graham. “From an industry perspective, obviously my label wants me to do well and sell records but, for me, I just want to play live more.”

His agent, Coda’s Alex Hardee, explains the live strategy was to carefully pick venues that would sell out “so we have tickets in the markets to maximise the more lucrative festival market”.

“If he has two more hits, he can do arenas,” says Hardee. “We will only do venues that we can fill.”

“I know we can do bigger - there was talk of doing The O2 - but I’m not cut out to do those venues,” suggests Graham.

“I’d rather do three nights at Brixton than one O2. I did a stadium in Germany and then Wembley [for Capital’s Summertime Ball], and straight away I felt, ‘This isn’t me’. I just don’t feel comfortable being that far away from my audience.”

And for all his achievements in 2017, the highlight of Graham’s year - or any other year, for that matter - came away from music.

“I had a baby, so that was pretty good,” he laughs. “I fucking did 55 festivals, bought a house and had a little boy, all in one year.”

Beyond this year, thoughts will inevitably turn to that difficult second album. “I’ve got a little set up on the road and I’ve been writing my next album with my keys player because we’ve got a really good thing going on with writing songs together,” reveals Graham.

“I’ve written, maybe, 10 songs in the last couple of months and we’re just going to keep on going until we’ve got some good ones.”

When those tracks see the light of day, however, is anybody’s guess. “I have no idea to be honest,” chuckles Graham.

“I’m going to try and be a dad for a little bit, in between all of the madness. Next time you see me I’ll be completely grey!”