The Xtra mile: How MistaJam became the hottest radio presenter on the dial 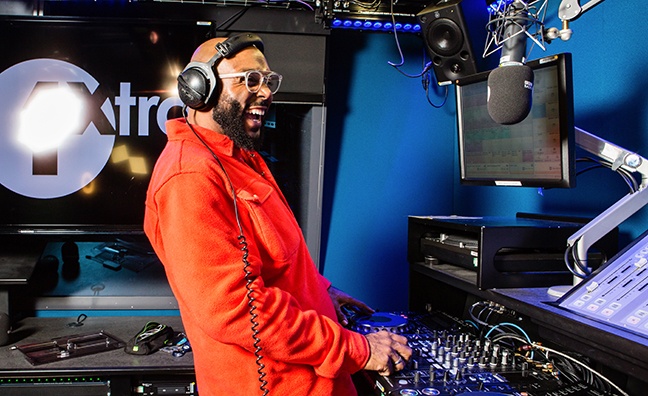 On the night Music Week visits MistaJam’s BBC Radio 1Xtra studio, the chat in the room is more working men’s club than new music hub. “I don’t really like the BBC tea,” says the DJ, reaching into his backpack and producing a freezer bag full of tea bags. “So I bring Yorkshire Gold in, who wants one?”

A few minutes earlier, MistaJam, decked out in gold Air Maxes, was bemoaning his “uncool” dance moves. That’s how things roll in his studio.

Between his team’s excitable scurrying and the throbbing low end of Cardi B’s Bodak Yellow, Jam (real name Pete Dalton) and co talk obsessively about music and shoot the shit. It’s unself-conscious, far from trendy or shallow, and love for their work is abundantly clear.

It’s precisely this combination of passion and likeable character that brings us to this small dark room, squirrelled high in Radio 1’s central London HQ.

We’re here in honour of Jam’s Music Week Award for Best Radio Show, presented back in April. As it turns out, we’ve dropped in on a busy day: for one, Wretch 32 is coming in for an interview, then there’s Jam’s move to 1Xtra’s drivetime slot, as well as a new gig hosting Radio 1’s Dance Classics, which is announced a few days after our visit.

“The drivetime show gives you the opportunity to have one foot in mainstream and another in specialist,” he says. “The last hour will be forward-thinking, with new artists and the first plays of new records.

The first two [hours] give me a chance to really focus on the entertainment aspect of me as a broadcaster. I’m really excited to straddle both worlds.”

He’s been endeavouring to combine an A&R’s eye for emerging talent with an innate sense of how to package music for mainstream appeal since pitching up at 1Xtra 12 years ago.

A stint covering Annie Mac’s evening programme on Radio 1 earlier this year proved he could hold his own in the indie and alternative worlds, too.

Jam’s bosses clearly rate him, and he says he’s always aspired to the versatility that his recent trajectory so clearly displays.

“I feel at home basically behind a microphone or in front of a camera, being able to share things I really like. I don’t think genre matters; I couldn’t work to a remit. If they think I’m versatile, that’s the ultimate pinnacle for me. Don’t put me in a box, just let me have a go!”

It seems that’s exactly what the stations’ controller Ben Cooper is intent on doing. So, before Jam’s On Air light flicks on, we pull up a wheely chair to talk grime, Liam Gallagher and 1Xtra’s vital role in the UK scene.

Will we see you on Radio 1’s drivetime show any time soon?

“Who knows what the future holds? All I know is that I’m passionate about being able to unite people, having a shared experience. Wherever I end up, that will remain my focus, marrying niche and mainstream worlds. Cut me and I bleed new music.

There’s always going to be an aspect of that in whatever I’m doing, regardless of whether the bosses want me to do it or not. Luckily, they really want me to!”

Is there more pressure on you to entertain?

“I always say you never have to take me seriously, but take the music that I play seriously. It’s been harder for me to inject those moments of fun over the past few years where the music’s been more serious, so moving to drivetime, especially on a playlist where I’ve championed 90% of it at specialist [level] anyway... It was too big an opportunity to pass up.”

How did it feel to win a Music Week Award?

“It was a massive shock. It was a real honour, when you look at industry-facing awards, especially the Music Week Awards... It’s people within the industry doffing their cap saying you’re doing a good job.

I’m almost on the periphery of the industry; we don’t get that involved in all the politics and stuff.”

How was your stint on Annie Mac’s show?

“I really enjoyed it, getting the opportunity to broadcast lots of different styles of music on an iconic show was amazing. What it did for me, because I’ve done this [1Xtra] slot for a decade now, is allow me to take a little break from 1Xtra, go and do something very, very different, learn a lot over there and come back completely refreshed.”

Did it change you as a DJ?

“No. I just did me, I went in there and just did what I do and hopefully conveyed some of the passion and joy that I have from discovering music I’ve never heard before.

Doing things like giving Sigrid the Hottest Record In The World with her first ever release, making a statement behind artists, seeing how much of a difference it makes on the bigger platform was really eye-opening.”

What are your standout memories from the show?

“Liam Gallagher was a moment. I joked to him that it was an interview I’d been preparing for since I was 12. It didn’t go down so well!

But it was amazing, I still pinch myself from time to time because I get to meet people that I idolise and am a massive fan of. Nobody yet has let me down, and Liam met every single expectation.

He was so open, friendly and warm, he talked about things in a way I’d never heard before and he was so much fun. It completely floored me.

For about 20 minutes after he’d left the studio I just sat there and had to collect my thoughts. Yes, I did get him to sign my two Oasis 7”s. Now I just need to get Noel in a room!”

How important is genre now when it comes to radio?

“I think radio is probably the one true democratic playground where every genre is given a fair roll of the dice. I’ve always been interested in that, whether it was being on the overnight hip-hop show on 1Xtra in 2006 and playing Lily Allen and Rihanna, or covering for Annie and bringing some of the grime stuff over to a Radio 1 audience.

I think that a new music show, especially in this country, is about introducing things to people that they might not have thought they’d like.

Genres are only really there to help categorise stuff, good music is good music. It doesn’t matter where it comes from, who’s made it or what tempo it’s at, if it’s a rubbish song it will sound rubbish on the radio, especially if it’s played next to a really good one!”

“We at 1Xtra have been trying to push this forward, for a long time commercial radio wasn’t playing anything from the grime or UK rap worlds.

It was very hard for artists to break onto the daytime playlists of any station, but 1Xtra has always been there supporting and nurturing those artists and helping them make a living from the music, but also giving feedback to help them believe in themselves.

We’re in a situation now where J Hus can have a Mercury-nominated album and have people go, ‘OK, what is this?’

Paul Weller saying that’s his favourite album of the last 12 months... It’s crazy but it’s testament to what we do over here, which is set the trends, set the pace.

What’s happened with grime and UK rap on the whole is they’ve changed the way the mainstream looks.”

“When you look at Man’s Not Hot by Big Shaq, he’s a comedian, he goes onto Charlie Sloth’s Fire In The Booth and goes so super-viral, with hundreds of millions of views of that one clip, in America, Australia, over here, everyone’s talking about it.

You boil it down and it’s quintessentially British humour. Nobody outside the UK understands it’s a parody but it’s gone to the point now where Island have signed him and it’s getting a full release.

That’s where things are right now; if it’s good and high enough quality then people will take it. Internationally, people are taking stuff we’re doing in the UK because we’re so authentic.

Grime and UK rap are making the mainstream think slightly differently about the disenfranchised group of hoodies that two years ago they were watching on TV and thought they should be scared of.”

How has 1Xtra changed during your tenure?

“More listeners. That’s probably it, the commitment and passion are still there, we spend a lot of time talking to artists and managers, making sure people really understand what it is they’re doing.

I spend time listening to and giving feedback to artists that send me music, and every now and then find something that works.

You end up going, ‘When was the last time that happened?’ I got an email from Ed Sheeran in 2009 saying, ‘Will you have a listen to my music?’ You think, ‘I’ve got to carry on doing this!’ The passion we have at 1Xtra takes us to a different place.”

Will you ever leave?

“I think they’ll have to physically remove me from this place, and I mean that. At the point where I don’t feel the thrill of being able to bring something new to someone that could change their mood, or make them think slightly differently, unite people or challenge their perceptions...

As soon as I find that boring I’ll leave. But I can’t see that happening any time soon.”