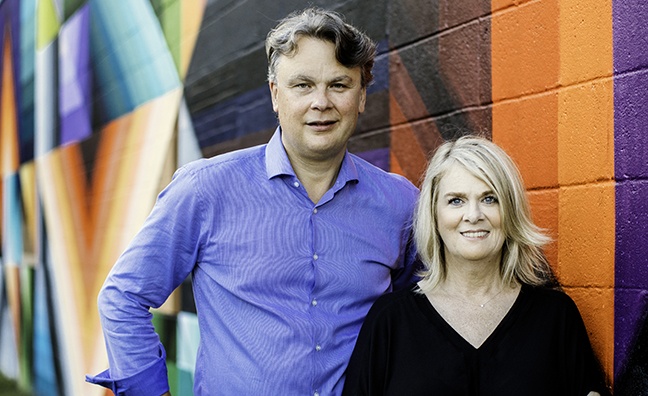 It’s been a huge year for Kobalt Music, from this month’s acquisition of Songs Music Publishing to big signings (including The Kooks, The Wombats and First Aid Kit) and Sas Metcalfe being honoured at the Music Week Women In Music Awards. The company has shaken up the world of publishing, so last month Music Week took a closer look at its revolutionary approach and financial performance with all the key players. You can revisit our cover feature in full below:

How does Kobalt CEO Willard Ahdritz love the music business? Let him count the ways…

The Swedish founder of Kobalt Music is revealing what he put himself and his team through to turn the company from a tech-driven music publishing start-up to a company capable of competing with – not to mention getting under the skin of – the biggest music companies in the world.

It’s worked too. Launched in New York in 2000, Kobalt has expanded exponentially since then. Its publishing division – which made its name by doing administration-type deals rather than signing artists directly – now represents around 8,000 artists and 600 publishers. It now employs over 450 staff in 10 global offices.

It added a neighbouring rights division in 2011, snapping up major player Fintage House last year. In 2011, it also bought label services company AWAL and in 2015 bought its own collection society, AMRA.

In the 2016 Music Week publishing market shares, it scored a 14.47% share of the Top 100 singles, marginally behind two of the three major publishers (Sony/ATV remains out in front with 33.15%).

And at the 2017 Music Week Awards, it took on the big boys and won, voted Music Publisher Of The Year.

It’s the kind of against-all-odds triumph that the biz usually loves. But despite its success, the music business jury is still very much out on Kobalt.

Rivals point towards Kobalt’s financials – its revenues rose to $260m (£195m) in 2016, but its losses also grew, to $30m (£22.5m) in a business that prides itself on profitability (Ahdritz expects Kobalt’s earnings to top $500m this financial year) – as proof that, while Kobalt may have broken the mould, its margins might just break the bank.

Others resent the brashness they see in some of Ahdritz’s – a financial and tech executive whose music business experience prior to Kobalt was limited to a short stint setting up Telegram Records & Publishing in Sweden – more evangelical statements (“I’m here to take the music industry into the digital age,” he proclaims at one point today). Ahdritz is aware of the sniping.

“I’ve not been so liked in certain places,” he smiles. “[One publisher] said, ‘Willard will single-handedly destroy the publishing industry’. I say, ‘When you understand what I’m doing, your copyrights will be worth four times more, and you’ll understand I’m the music industry’s best friend…’.”

Which is why, much as Ahdritz likes to reel off big numbers, today he’s only really focusing on a single digit: making Kobalt No.1…

One of Ahdritz’s big bugbears about how others view his company is that, while Kobalt will be given grudging respect for its use of technology and its push for transparency, it is rarely given the same credit as a creative company.

“It has always been easy for [people] to say, ‘Oh, they are not creative’,” he shrugs. “However, it’s absolutely clear that, on a global scale, working with one roster, the people we work with are extremely satisfied with the cuts we get, the access to camps and the co-writes that we actively set up in London or Stockholm or Nashville or LA or Sydney.”

And indeed, Kobalt is blessed with executives whose track record stacks up against anyone’s in the A&R stakes.

And its chief creative officer is Sas Metcalfe, the inaugural winner of the Music Week Women In Music International Woman Of The Year award, who left behind a stellar career in the olde worlde of traditional music publishing to become Ahdritz’s first ever employee in 2001.

“In the early days everyone thought I was mad,” she laughs, already up and at ‘em at 8am Los Angeles time.

“I loved the concept when I first heard about it from Willard, it excited me. I loved the fairness and the transparency. I’m quite happy to empower the creator; for me it’s all about that. I can see it with our writers and artists; they’re so happy. They never seem like they’re not getting a good service…”

And, indeed, Kobalt writers’ fingerprints are all over some of the year’s biggest albums. In contrast to the majors, Kobalt may not own the rights, but Metcalfe insists that doesn’t lessen their contribution.

“You have to do a great job,” she says. “You can’t sign something and just forget about it. You have to stay close, because they’re not signing their lives away. They’re only doing short deals, so the system and the energy of the creativity has to be great, because there are plenty of people that would, and still do, try and take things away.”

Other publishers would, and do, say the same, of course, but Metcalfe insists that Kobalt’s focus on transparency and efficiency – Ahdritz claims to collect “30% more money two years faster” – means a Kobalt deal is always a better deal for the artist.

“I used to feel bad about not being able to give people their own money,” says Metcalfe, who served time at Warner/Chappell and EMI in the UK. “And you knew the money was there. They were so strict on holding onto money, paying half-yearly. It was their money and it was sitting there. I think you should get money directly back to writers as soon as you can…”

Ahdritz, meanwhile, claims that Kobalt’s ‘one roster’ approach, with no regional signings or bias, means all acts have an equal shot at every opportunity that comes along.

“I have re-engineered the front office too, not just the technology,” he declares. “Because music is global and you want to work global. I don’t give any direction to my sync team on what they should pitch because of finance. They pitch which song they think fits best.”

So, while Kobalt president of global sync and brand partnerships, Jeannette Perez, uses a data-driven approach to stay on top of trends and opportunities, she maintains her team are as creative as any other sync division out there.

“There’s been talk of AI [Artificial Intelligence] taking the place of what we do from a sync perspective,” she says. “But AI could never take the place of the emotion you feel when you hear a song that resonates with you because the first time you heard it was when you were 10 and you were experiencing X, Y and Z. Maybe AI can replace the jingle or the library track, but it can’t replace Landslide by Fleetwood Mac – ever.”

Perez’s approach is thriving. Her team scored nine Super Bowl 2017 slots and she says it has granted 11,000 sync licences in the last 12 months to achieve “double digit growth”.

“It’s down to a combination of growth in the catalogue and the diversity in our catalogue,” says Perez. “We have everything, from music from the ‘60s and ‘70s to contemporary pop hits on the Hot 100 chart to country and hip-hop and everything in between. Kobalt is always in the mix for opportunities. We’re making sure we are maintaining the value of the copyright but also we’re closing as many deals as possible.”

But as Kobalt catches up with the old school companies that it initially set itself up to disrupt, and in turn those companies embrace the technology and transparency with which Kobalt made its name (who doesn’t have a portal these days?), does Kobalt lose its USP?

“It’s become harder to maintain [our advantage], definitely,” admits Metcalfe. “But our mission still stands. We are the Coca-Cola, if you know what I mean. We’re not the Virgin Cola or whatever. I don’t think these companies are set up as tech companies like Kobalt is. It’s OK to launch something, but it’s how you maintain it. A pie chart online is not a transparent portal. I have to say I haven’t seen anyone else’s portal. I hear that they’re quite good – but I also hear that Kobalt’s is a lot better…”

“You can repaint the aircraft, but you still have the same shitty toilets,” says Ahdritz, rather more pithily.

“The deep integration of all of the different DSPs, telecoms, societies and digital distributors in the world is absolutely a tough nut to crack and I can tell you we are the only ones in the world that have done it. You can have a great app or put your statements on the web. But there’s a difference between talking the talk and walking the walk. It’s absolutely clear that Kobalt is setting the new standard.”

Nor does Ahdritz intend to stop the programme of technological investment that has driven Kobalt’s explosive expansion.

Earlier this year, it closed a $75m (£56.4m) funding round led by US media giant Hearst –yet some still don’t buy its model.

“So there is a lot of bad mouthing,” he shrugs. “One day, they’re actually going to have to give me some credit. They were old and out, had no vision, and focused short-term on getting their $50m salaries, taking the industry down the tube.

"I was the only guy building an industry, investing in technology when everyone was getting out. I’ve had enough of bullshit from a lot of people who are actually sub-optimum for the industry, shooting themselves in the foot when the opportunities are so great. But, as long as my clients are happy and my investors are excited, I am happy.”

In fact, Ahdritz is restless for more change. Kobalt’s investment arm, Kobalt Capital, recently closed a $600m (£458m) funding round that will see it invest further in music publishing assets.

It's planning a push into visual content (“If you look at the huge volume of entertainment IP transactions, be it videos, films, video games, we think there’s also a play to bring technology, efficiency and transparency into that process,” says president and chief revenue officer Laurent Hubert).

Perez sees huge opportunities in international sync and new digital outlets. Metcalfe believes Kobalt will “end up being the answer to managing rights for writers and artists”. Its recordings footprint is growing by the day. The upstart has become a big player.

“No one – Apple, Spotify or any licensee – can have a [complete] service if they don’t have a licence from us,” Ahdritz says. “And what we're pushing when we sit at the big table is extremely beneficial for rights-holders. I want data so I can report to clients transparently. I can take my ball and go home if I don’t get what I want.

"It’s not about pushing for huge advances. It’s [about], how do we build an industry? How do you build a system and structure for the common good of the whole music industry? Music is one of the most important strategic assets in the world. It has been significantly under-valued. But we can triple this industry, easily!

“I’m actually more excited than ever,” he concludes. “The fun has just started when it comes to digital. The party’s going to get even bigger.”