Women In Music Awards 2021: Businesswoman of the Year Cassandra Gracey 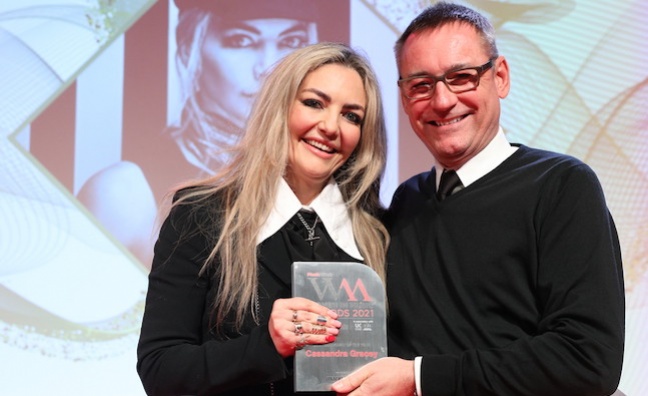 The Music Week Women In Music Awards returned for the first in-person event in two years to honour 12 incredible executives and artists.

Here, Women in Music Awards 2021 Businesswoman of the Year Cassandra Gracey (pictured with Sony Music UK CEO/chairman Jason Iley), president of 4th Floor Creative, reflects on her career so far, progress on gender equality in the industry and her ambitions for the company...

How do you feel about winning this award?

"I am honoured and delighted. And then at the same time, I look forward to when we no longer need to have Women In Music Awards, and when we have People In Music Awards."

It’s a fair point. But you are one of a handful of women at presidential level in the UK music business. Why do you think that is?

"I think the industry noticed some years ago that there weren’t enough women in senior positions in senior management positions. I’m involved with the BPI group working on Gender Research In Music at the moment and meaningful change takes 17 years, which seems so depressing. But at the same time, I think we're a long way into that change. Thinking of presidents and major labels, we still have to bring women up the companies. It’s not for everybody, being president, male or female: you get there and then you’re in the firing line to be shot off. There are women in senior positions, we just need to help more of them get to those positions."

Your work with 4th Floor Creative is very varied. How do other creative disciplines fit within the music industry?

"I think the demand for all things creative, content and visual has continued to increase and with the pandemic it’s accelerated even further. Twenty years ago, when I was working music management with the Sugababes they were doing 10 TV slots a week, no word of a lie. We don't have that now. There will be some high profile TV slots, like Graham Norton, but not many. But now we have social media. The artists have a control of their own narrative that they didn't have previously, and social media accounts can reach more people than TV or print press. But all of these channels need to be populated with content. And you need so much content to hit the various platforms, you need YouTube Shorts, Instagram Reels, TikTok. We work on every version of short form content to help artists hit different audiences with the appropriate tone, because what you're going to put on TikTok is not what you’re going to put on Facebook, is not what you're going to put on Twitch. So the need for more content only continues, which is great for me and my team.

Can you tell us more about what you and your team do?

"We have branding and fashion partnerships, that could be anything from putting Paloma Faith with Skoda. It could be Joy Crookes with Dior in an ongoing partnership that will include a magazine cover, or it could be Hans Zimmer with the Oppo handset, doing loads of different content that we will shoot and then share out with him.

"Then we have the visual creative section, that’s all the music video commissioners. We have creative directors, we have a photographic studio that we built, we have in-house photographers and designers. Their work includes logos and assets, through to clothing ranges because we have a merch company as well. There’s the premium content team, directors, producers and editors. They shot the Little Mix film, LM5 - The Tour Film. That was in partnership with Sky and it had a theatrical release. They will also do TikToks and other short form content. We have the digital and audience development side, who handle our relationships with social platforms. Insight and analytics work at defining the audience and looking at data to define which way to go. There’s the customer relationship management team. And the sync team where we look at music to picture. There’s how we work waith influencers. Then there’s podcasting and gaming."

When you sign to a major label, you want all the services and that’s what our skill sets provide

Thinking of the collaborations you’ve done with brands, what’s been a highlight for you?

"A personal highlight, just because she's a global superstar, was Mariah Carey doing the Walker's campaign. That was fun. It wasn’t especially innovative, but she’s very good and she knows her brand and played it so well. And you’re in the room with a global icon. In terms of pride for 4th Floor, the Lotus Skoda campaign was great for Paloma and we won an award. The LM5 film was great because it was a first for us shooting in-house with multiple teams and a first theatrical release."

What other highlights are there?

"I also love that at Sony we have a Social Justice Fund. We work with an organisation called Small Green Shoots which helps get minority and low-income people into organisations. We’re going to have five people working with 4th Floor for three days a week and they spend the other two days with Small Green Shoots. They’ll be with us in various departments for six months, and at the end they’ll leave with a skill set. That’s starting on 1 November and it’s really exciting."

From a business perspective, how important for Sony is the work you do with 4th Floor?

"It’s absolutely vital. I see it as the future of all record labels. It makes a difference. There are so many options open to recording artists, they can choose to sign with the likes of Orchard, or AWAL or with a major label. My team is a point of difference. We can say: if you choose us we can make this happen. When you sign to a major label, you want all the services and that’s what our skill sets provide."

What would you really love to do next?

"The list is endless because we are so future facing. We’re in discussions about NFTs. We’re looking at more films and documentaries. I’m determined to break an act via gaming because I don’t think that’s been done yet. And, honestly, I just like to make a difference in artists’ lives."