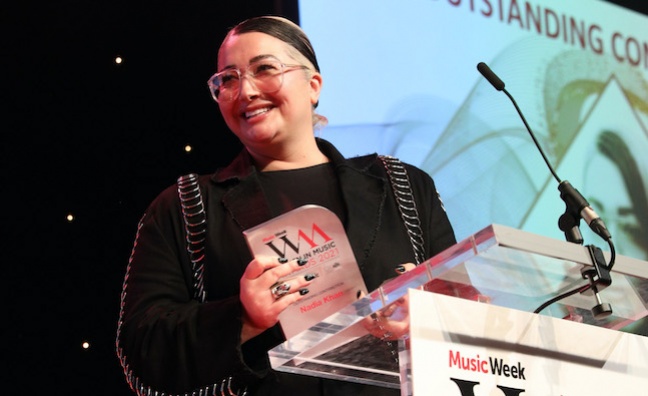 The recipient of the Women in Music Awards 2021 Outstanding Contribution award went to Nadia Khan.

Having worked in the music industry for over 20 years, she runs CTRL Music, a music consultancy and artist management company, and has managed long-term client Lethal Bizzle for over 15 years.

Khan has led multiple record labels to Top 20 success independently and her own label imprint CTRL Records is focused on spotlighting female talent. Since 2017 she has been a director of the board of AIM (Association of Independent Music), and in 2021 was elected as chair of AIM.

Khan is also the Founder of Women in CTRL, a not-for-profit organisation aimed at empowering and campaigning for women in music. She is a passionate champion for diversity, equity and inclusion, and her work in promoting gender parity and representation has been widely recognised. Her research and data reports, including the influential Seat At The Table report, have helped to action real change across the industry for both musicians and executives. She recently launched a board development programme with PPL to bring more women into the boardroom across the music industry organisations.

Here, she shares some reflections on her incredible career...

How do you feel about winning the Outstanding Contribution award?

“When I found out, I was in complete shock. I first came to the Women In Music Awards four years ago. And it quickly became one of my favourite events of the year. My whole career, I've worked in male-dominated environments. The industry as a whole is male-dominated, but in addition to that I worked in a male-dominated job in a male-dominated genre. I felt quite alone for a lot of my career. So, four years ago, I was just blown away by all the incredible women. I could finally see role models and other women standing on the stage and speaking out about the things I felt too.”

You also started Women In CTRL four years ago and now you have 2,500 members. Can you tell us about that journey?

“I started Women In CTRL to empower other women and to empower myself along the way. I wanted to kind of change the status quo in the industry at the time. I wanted to really encourage women to shout out more about our achievements, and then also to speak out about our experiences. Like I said, I felt quite isolated and quite alone through a lot of my career, dealing with a lot. But it was only when I started to speak out that I realised so many other women - nearly every woman I've spoken to - had gone through the same kind of thing. So it started with just me shouting on my Instagram. The first person I featured as a Woman In CTRL was Afryea Henry-Fontaine who’s the marketing director at Motown Records. I’d been working with her and I thought she wasn’t getting the recognition she deserved. So I just wanted to give her a platform, a shout out, say ‘You’re amazing’. It was to try and counteract women not speaking up about their achievements, but also an observation of the industry and seeing male counterparts getting promoted more regularly and so on. So everything fed in and it just kept growing and growing. Then last year, with lockdown, most of my business was put on hold. So I had the luxury of time. I started doing weekly webinars and giving the platform to other women. Then when I opened it up to membership, I had 800 people sign up overnight and I set up as a not-for-profit organisation. I also started doing some serious research.”

This is the work that was published in July 2020 as the A Seat At The Table Report, isn’t it?

“I know a lot of women struggle in the industry to get taken seriously. So I think that data is a really important tool that we can use, because it's just facts. And something that's really helped me through my career is always just sticking to the facts and following the procedures. So, with the time I had, I sat down and started to do research. I thought having the data would be useful and it would show that there really were inequalities there and raise some awareness. But at the time of publishing the report, I didn’t actually think anything would change. I was also really nervous because I thought it would make me into a target and that I would get cancelled by the industry. It’s great it’s been so well-received. It first started gaining traction because other women were sharing it, feeling enraged by what they saw in it. But then a lot of organisations started coming to me and having conversations about wanting to make change.”

I wanted to really encourage women to shout out more about our achievements, and then also to speak out about our experiences

Was there anything in your research that surprised you?

“Yes. I was shocked by the data. It’s strange, because in some ways it was a confirmation of what I thought was happening. I knew I didn’t see many women in leadership positions and, when I was starting out, I didn’t see many women around me that I could use as role models. But I didn’t realise the actual numbers would be so stark. For example, the number of female CEOs has actually declined over the past five years. Women are leaving and being replaced by men. I was also surprised by the lack of female chairs across music industry bodies.”

Is that why you stood to be, and were elected as, the chair of AIM in February of this year?

“There were a lot of factors that fed in. I’d been having conversations with women over the previous 18 months and saying ‘do you know you’re eligible for this board position?’ and the answer was always no. Knowledge is an issue, but so is lack of confidence and imposter syndrome. I also stood because I think we need to break the systems that were created by men for men. It is a boys’ club culture. Because as much as I mention confidence and feeling like an imposter, I don’t think the onus should be on women to have to fix things. And even though I knew all this, it was a struggle to put myself forward. I left applying until the last minute. But I thought it was important to practice what I’ve been preaching and be the change.”

“This year I published a follow-up to the first report, A Seat At The Table: One Year On. PPL came on board and helped me this time, because last year I did everything myself, even the design work. Having their support meant I could add another section where I spoke to 100 women across the industry and give them a voice. I’ve also put out the Women In Radio report - and that showed 84% of women in that industry felt that being a woman held them back in their career. One thing that's been incredible from last year is seeing a real change in the culture, everyone's more open to speaking out. We've also been sharing a lot of information and I've seen a lot more collaboration across the industry. My next report is looking to be a collaboration with another organisation in the industry: we’re working together to take the next step. We can only talk about it so much. We know these problems exist, so now is the time for change. Look at the gender pay gap. It’s still 30% in the music industry, but the national average has been reduced to 15%. So the next step needs to be actual change, not just talking about change.”