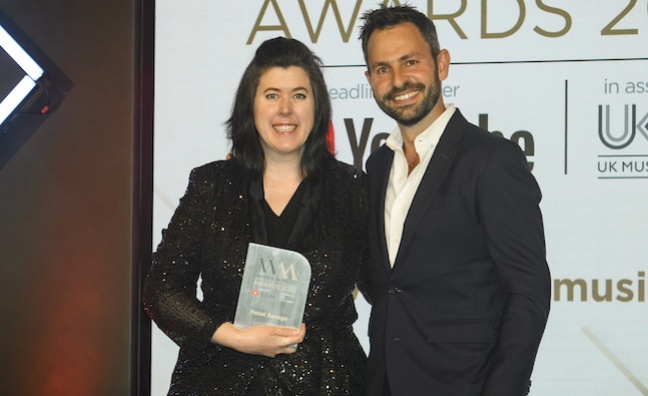 At the Women In Music Awards 2022, we celebrated the achievements of 12 game changing executives and artists as the industry came together to honour their work. Music Week has spoken to all 12 winners to tell their stories.

With 15 years experience in the music industry, Hazel Savage is a tech expert, guitarist and former CEO and co-founder of Musiio. She is now VP, music intelligence at SoundCloud, which acquired Musiio in May this year.

Savage (pictured at the ceremony with SoundCloud president Eliah Seton) started her career at Shazam, moving to Pandora, Universal Music Group and HMV before launching Musiio in 2018.

A female founder in the heavily male-dominated industries of music and tech, Savage travels globally speaking at conferences and educating catalogue owners about the value of artificial intelligence integration and digital transformation in the music industry.

Here, she reflects on winning the Entrepreneur Award at Women In Music 2022 and charts her journey through the industry…

How do you feel about being recognised in this category?
“Honestly, it's amazing. It feels a little surreal, but it's the biggest thing I have ever won and I am truly humbled and delighted by it. WOW.”

You've worked in physical music at HMV, digital at Shazam and labels including UMG. What led you to launching your own company?
“In my 15 years plus in the industry, I have really run the gamut, starting in physical retail, working for a lot of B2C consumer apps such as Shazam and Pandora and then using all my experience at 36 years old to start my own B2B company. I feel privileged that I got to experience all those things, CDs were still sold in the early 2000s, I remember when the first iPhone came out and with it ‘apps’. I also get to be at the forefront of the next wave of the music industry which I believe is about using technology at scale to connect the artist and fan together. I was lucky to get my start at EF (Entrepreneur First), the incubator, when they cold called me and said, ‘We will pay you to start a company.’ I think the trick is, when the universe speaks, you need to be listening.”

What was the biggest challenge in establishing Musiio? How did you educate potential clients?
“There was definitely more scepticism around AI in 2018 when I started Musiio, a lot of ‘fake AI’ companies coming before us had done a lot of damage and burned a lot of bridges with the labels and other large music companies, so the first two years were all about rebuilding trust in the technology and putting myself forward as the steward for that particular job. Also, how your product shows what you can do is key. Most industry folk are not developers, so passing the code along isn't helpful, a one-click demo is, you can still try it on the Musiio site.”

I never experienced too much discrimination as the founder of a company, it was worse when I was a musician

What was the vision for Musiio – and how are you building on that original idea now at SoundCloud?
“I always believed Musiio was one third of a billion dollar business. To build the world's best holistic music company, you need three things. Firstly, you need legal access to a huge amount of music, secondly you need the tech to know what you have and how to playlist it, and thirdly you need to be able to monetise efficiently; by connecting fans and artists or becoming a bigger part of an artist's journey. Musiio was simply the tech in between the other two parts. My options were either to build those other parts myself, or work with someone who already had parts one and three. SoundCloud has those other parts and is unique in its scale and independence. I was excited to join forces with them.”

As a woman leading a tech firm, did you encounter any discriminatory attitudes? How has the tech start-up sector improved in terms of gender and diversity?
“I never experienced too much discrimination as the founder of a company, it was worse when I was a musician, I'd be carrying a guitar to a show and people would assume I was someone's girlfriend. But at Musiio we worked with a lead investor who over-indexes in funding female founders, and I was very lucky and chose carefully who I wanted to work with. Of course, occasionally you would get a funny attitude, such as the time we met with one VC and they asked Aron [Pettersson, Musiio co-founder] if we were married, to which I replied, ‘Yes, but not to each other.’ You have to see some humour in it, and let some things roll off your back.”

Musiio was established in Singapore. What do you think of the country's reputation for encouraging enterprise? What can we learn from Singapore?
“When I founded Musiio in Singapore in 2018 there was a fantastic attitude to founders and starting companies, I love that they have a visa specifically for entrepreneurs. And many of the country’s legislative benefits around GST and capital gains tax make it a very attractive base (although admittedly not all of us find GST exciting!). The main benefit to being in Singapore to me was the geographical centrality of it, you could fly easily to Japan, China, the USA and Europe, so you really can be global. Admittedly, though, the weather is a bit hot for me!”

Your company has demonstrated a commitment to mental health, what simple measures can be effective for employees?
“Musiio existed for half of its life during Covid, and those two years were undoubtedly the toughest. The fact for us, was that a lot of developer talent, which often comes from India and Russia as well as other countries, means that these brilliant individuals are a long way from home if they have moved abroad to work for you. I think this means you have an enhanced duty of care, and Covid simply amplified that. To me, it means showing people in big or small ways that you actually care, be it a small care package of iced coffee and biscuits one morning, or doing an online yoga session together, or writing a quiz for the whole team and hosting it yourself. Of course, where success comes to the business, then you recognise these people financially.”

I thought raising money was hard, but selling a company is absolutely harder

You sold the company to SoundCloud. What was the process like, ensuring that a firm you had built found the right home? How do you maintain the vision for Musiio within the wider set-up?
“Selling Musiio was undoubtedly the hardest thing I had ever done. Not because it's ‘mine’ or I have an emotional attachment to the technology, but because it was without a doubt the most challenging negotiation and legal process I have ever been through. I thought raising money was hard, but selling is absolutely harder. We had many approaches over the years and for me, two things were key. Who will keep the tech in market and available to buy (not buy us and turn the tap off) and who has the chance to become a world class holistic music company. SoundCloud did and is this company.”

How does SoundCloud create a supportive environment for women in the company, are there any key initiatives or policies?
“SoundCloud has great gender parity at the top and all throughout the organisation, as well as diversity in other ways that are equally important. To have a gender diverse leadership team is hugely important to me. I am a female founder and a female leader and, in some ways, working towards it not being the first thing people ask or notice is progress. But there are also groups and resources to make sure we lift everyone up, such as WINE (Women In Engineering Group) and the W@SC (Women At SoundCloud) resource groups, with events and mentoring across the board.”

Can you predict where AI and music will go next? What do you hope to achieve in the next five years?
“I am waiting to see if a breakthrough in AI-written music will come. I see some early indicators. In my space of descriptive AI, I think we will see scale coming in the form of more affordable AI models, AI as a driver of artist benefits and success as well as the speed with which AI models can be built and deployed. I always want to reserve the right to be pleasantly surprised. A lot of great innovation comes from the unexpected.”

Finally, how has playing in a band helped your industry career?
“It made me appreciate what it is to start out and to play in an empty room! I got my first guitar when I was 13 and, unprompted, taught myself to play, because I loved music and I wanted to be part of that world. I still love to play guitar and sing, there is no better feeling in the world to me. It gives me respect for the work that goes into making music, and it's like a secret handshake with every other musician in the world. We are all in it for the love of music, for the right reasons, because loving music is the right reason.”