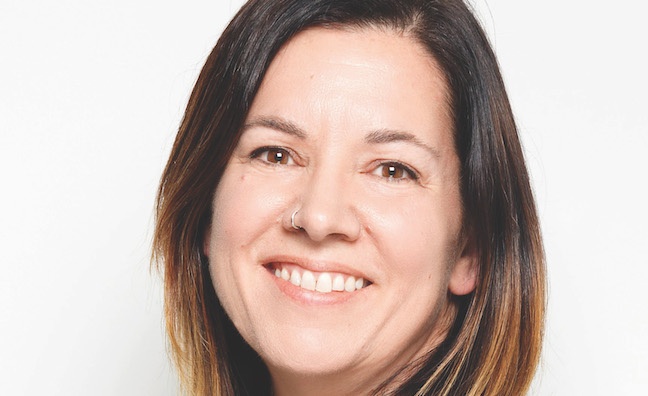 “I’ll admit that it does feel a little odd as it’s always suited me to be in that hidden part of the industry, behind the scenes and well away from the chance of being caught by a passing spotlight. Paradoxically though, I am extremely aware that representation does really matter and the Music Week Women In Music Role Of Honour is a really strong way of putting female role models front and centre. I’m extremely proud to be amongst them.”

“I started out in 1995 as maternity cover on reception at MCP Promotions but quickly realised I’d found a world where I fitted, so I took every opportunity to cement myself into the team before the six months was up. My main challenges were of my own making as I had a lot of self-doubt about what I was capable of and that lasted for many years. I also carried my own assumptions about what I could expect as a woman and I often recall a conversation I had with one of our production managers in the late 1990s, who was suggesting that I would do well in their team. I assumed that he was saying they needed an admin person and he had to put me straight. It amazes me now that I had that assumption at all, let alone accepted it as the status quo.”

“Honourable mentions have to go to John Probyn of Festival Republic for the summer of 2007 and Sarah Hemsley-Cole of SC Productions for being the first woman I met on site outside of the traditional roles. If I had to pick just one person though it would be Kilimanjaro’s CEO, Stuart Galbraith. He has been shoving me off metaphorical cliffs for 25 years and I’m grateful to him for all of those times. If it were left to me I would have been content staying in admin and would never have known the utter joy of watching an audience enjoy a huge show that I was in overall control of.”

What do you consider to be your biggest achievement so far?

“It wasn’t the biggest thing I’ve been responsible for, nor the most complicated, but I’m going to pick the delivery of Ed Sheeran’s first ever stadium shows. He played three nights at Wembley Stadium in July 2015 and I think it was a real moment for everyone concerned. Many of Ed’s team had been with him for years and were making the leap in scale right alongside him. It was easily some of the happiest days I’ve had in the industry, being able to use my experience and knowledge to work with Ed’s production team and the stadium to successfully put him in front of 270,000 people. Stadiums are standard fare for him now, so it was good to be there when it was special.”

“Look at all of the jobs, work out which appeal, and go for them. Don’t assume that you only have a limited selection of roles open to you, and don’t listen to the internal self-doubt that was taught to us from birth. I fully believe that if we had more women in all of the roles in the industry that their appearances on big festival stages would improve. Also, please say ‘yes’ to any invitations to speak on panels, podcasts, guest lectures at universities, etc. The right role model at the right time can make all the difference to someone’s expectations of how their life could be.”

“Surround yourself with people who are experts in their field – and listen to them.”

What’s the biggest lesson you’ll take away from 2020?

“This industry is all about the people, and they are incredible. I have been so impressed with how some people in particular have stood up to organise and lead, taking others with them. It is going to carry on being a very tough time and I get a dent in my optimism from time to time but I remain entirely sure that we will rebuild what we had and the experience will make us stronger together.”