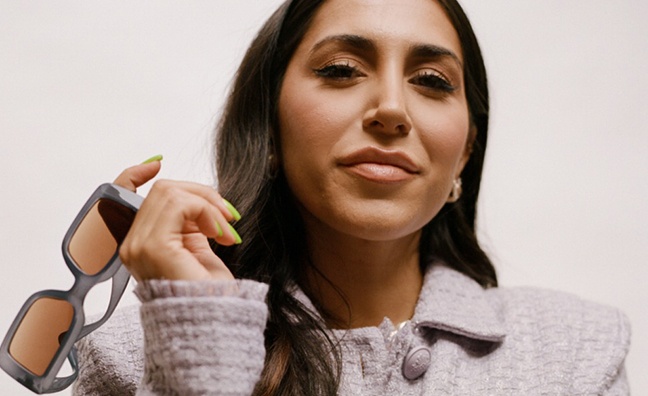 During this year’s Women In Music Awards, we inducted a further 14 amazing industry executives (including one posthumous award) into the Roll Of Honour, in association with TikTok. They join the pantheon of previous honourees, including some of the biggest names in the business, from Emma Banks and Sarah Stennett to Kanya King, Rebecca Allen and Stacey Tang, that have been selected since the awards began in 2014.

The Roll Of Honour aims to highlight the breadth, depth and variety of individuals who are game-changers in the music industry, with their activities consistently benefiting women, or focusing on empowerment/gender disparity. Following the Women In Music Awards ceremony, Music Week is running Q&A interviews with all of this year’s Roll Of Honour inductees.

Ellie Prohan has fast cemented her name in the industry as a passionate music lover, talented DJ and an advocate of women, intersectionality and marginalised communities.

Emigrating to the UK from Iran at an early age, in a single parent family of Persian heritage, Prohan overcame a host of obstacles as she pursued her dream of becoming an international DJ as a queer, middle eastern woman.

Prohan is known, among many things, for her weekly 15 Seconds Deep feature, a staple of her Tuesday night Kiss FM show, which was inspired when reading Angie Martinez’s book exploring how she used to break some of the greatest hip-hop artists of her generation on radio. Applying it to her own love for drill and UK rap, 15 Seconds Deep has created a healthy and vibrant gateway opportunity for artists, where two go head to head each week with just 15 seconds of their song, leaving the public to decide and vote on who gets a full play on the show at a primetime slot of midnight each week.

Curating not only her Tuesday night Kiss FM show with the best of drill and UK rap – giving 28 new artists a week their first ever Kiss play – you can also hear Prohan live as one of the voices to The Apple Music 1 List show out of the London studios. You can also hear her Kiss Fresh show from Monday to Wednesday, 7-9pm.

Prohan’s infectious energy doesn’t end at radio, either. In 2022 alone she has DJ’d at international festivals including Reading And Leeds, Kisstory, Outlook Festival, Glastonbury, Flackstock, Wireless and Boardmasters. She also presented the first ever main stage rap competition with 8Bars at Strawberries & Creem Festival and was honoured at Brunel University with an alumni billboard for her work in the music industry.

Prohan has also worked with brands such as Nando’s, Puma, Gay Times – of which she hosts a monthly exclusive playlist Engayged – JD, Ford and Duppy Share. Prohan hosted TikTok’s first ever live UK rap and culture show, Oi TikTok, alongside creator Moyo, to apply her presenting skills to a live show. It is but the first step in an exciting new path into digital and TV media presenting.

"I just wanted to say a huge thank you to my community and allies in the industry you know who you are," said Prohan. "And the most special thank you to my nearest and dearest family, my pocket rocket Persian Mum for always pushing me, my partner in life and love Parris for being my rock through all the ups and downs, and my co-d Amanda Maxwell, Nadia, Gemma, Ellen & Amelia Thank for your love and support now and always.It’s appreciated more than I can say."

Here, Prohan reflects on her remarkable career so far...

How do you feel about joining the Music Week Women In Music Roll Of Honour?
“I feel absolutely overwhelmed to be nominated on the Roll Of Honour this year for my contribution to the music industry. I’m grateful to be able to wake up every morning, doing what I love, working alongside communities, brands and platforms that mean the world to me and who are aligned with the same passion and purpose that I have. I’ll be celebrating this honour alongside the other nominees, who are themselves strong identifying women in the music industry who continue to break down doors for the love of music.”

How do you look back on your early years getting into the industry?
“I had a completely different career before I stepped into the music industry. When I started to learn how to DJ, I didn’t even realise it would lead to where I am today. After three months of practising my fingers to the bone, I got my first residency. Soon after that I made new DJ friends and attended my first female only networking event which was called Flexx at the time. I would say at that point, I realised, ‘Woah, this is a whole new world for me.' One bit of advice I was given before I got into radio was don’t tell them you’re over 25 because no woman over 25 gets into radio. Safe to say that’s not true. Looking back, the support I had from my community combined with being inspired by women all around me who owned their lane with true passion and resilience gave me the confidence to step into my own truth and be fearless in what my purpose was. This has grown me into the person I am today. I want to say a huge thank you to my community and allies in the industry. You know who you are. Thank you for your love and support now and always.
And the most special thank you to my nearest and dearest family, my pocket rocket Persian mum for always pushing me, my partner in life and love Parris for being my rock through all the ups and downs and my co-d Amanda Maxwell, Nadia, Gemma, Ellen and Amelia. Thank for your love and support now and always. It’s appreciated more than I can say."

Did you have a mentor at that stage?
“I truly believe my radio career wouldn’t even exist if it wasn’t for Jamz Supernova. She ran Flexx alongside Amy Collins and they were dedicated to connecting like-minded women in the music industry. They created so many opportunities for growth, and are responsible for some incredible relationships that have survived the test of time. Jamz selflessly gave her time to me and helped me get my foot in the radio door, which led to the career I have today. And I’m forever grateful. I also met my manager Amanda Maxwell at Flexx and we’ve been riding through thick and thin for the last six years, and I would say Amanda has also been my mentor in so many ways personally and professionally. I would be lost without her.”

You have been incredibly open in interviews about your desire to be an “active representation” of your own heritage and sexuality. If you are comfortable sharing, what were some of the obstacles you faced as a female, gay middle eastern woman specifically, both in the industry and society?
“I would say my biggest achievement is simply living my life, being authentically true to who I am, and the passion that I have on a day-to-day basis. This may sound cliché but being gay and Persian isn’t the easiest path in the world. Where I’m from, being gay is a crime, which is punishable by death. With everything that’s happened in Iran recently, where women don’t have a choice of freedom and they don’t have a choice to be who they want to be or love who they want, it’s imperative that while we can, we honour and nurture that freedom and actively push for representation of all underrepresented and underprivileged communities within our industry. If the eight-year-old me had a gay Persian DJ, radio host and TV presenter to look up to when I was growing up, my life choices would have been very different. That is why I am as loud and proud as I can be, DJing at festivals all over the world trying to inspire young women to be who they want to be regardless of age, sexuality, race or gender and carrying that through to national radio every week. That's why I'm pushing and supporting 28 new artists from the UK rap and drill scene who thrive off their first national radio play and then have an incentive to spend six hours less on the street and six more hours in studio. The challenge for us all comes from being underrepresented – the solution is: representation matters. It brings opportunity and hope to those who need it the most.”

If the eight-year-old me had a gay Persian DJ, radio host and TV presenter to look up to, my life choices would have been very different. That is why I am as loud and proud as I can be

In 2019 you launched an event series, Ellie Prohan & Friends, aimed at equalising talents on all levels surrounding intersectionalities such as race, gender and sexuality. How far has the industry got to go in its journey to equality?
"Since 2019, the industry as a whole has started to acknowledge the problems that music executives and talent have experienced and are still challenged by day by day. The statistics speak volumes. The reports highlighted by the UK Music Diversity Taskforce, Black Lives In Music and the work of Help Musicians – which are just a few examples of organisations highlighting the issues so that we can make a change – show that we still have so far to go when it comes to equality surrounding intersects of class, race, gender, neurodiversity and mental wellbeing. Change in my eyes really does start with joining forces to tackle the issues and making the stats available to us all, so that we know where the points of concern are. It was encouraging to see how many companies had signed up to the UK Music Diversity Taskforce Ten-Point Plan, which equipped companies with actions and dates to hold them accountable for change. However, until we are no longer asking the question, it feels like we as individuals and as an industry have the opportunity to be pushing for as much progression as possible. But doing it from an authentic standpoint to create a legacy for the current and future generations to thrive and not just survive.”

What advice would you offer young women about enjoying a successful career in music?
“My best advice for enjoying a successful career in music is keeping good company and making sure that they are having just as much fun as you while you go on the journey. The support and community around you is paramount, in the ups and the downs, celebrating your wins loud and proud and, when you feel like giving up, pushing you to keep going.”

And what’s the best advice you’ve ever had?
“The best advice I’ve been given is from my little Persian mum who once said, ‘You can buy a Lamborghini, but after a week, it’s just a car’, which is her way of saying that material things in life don’t matter, and what really keeps you alive is purpose, because life is nothing without purpose. And I’ve always lived by that.”

Finally, what's your biggest lesson from 2022 so far?
“The biggest lesson I’ve learnt in 2022 is that how you start the year isn’t necessarily how it’s going to end. For example, in January post-Covid, we had no DJ sets, no festivals, nothing. The panic set in so Amanda and I put our heads together, drew up mind maps, prayed, supported each other, and every single goal and more on that mind map came to fruition. It was such a huge lesson of patience and the power of a positive mental attitude that I will genuinely be carrying that through for the rest of my life.”