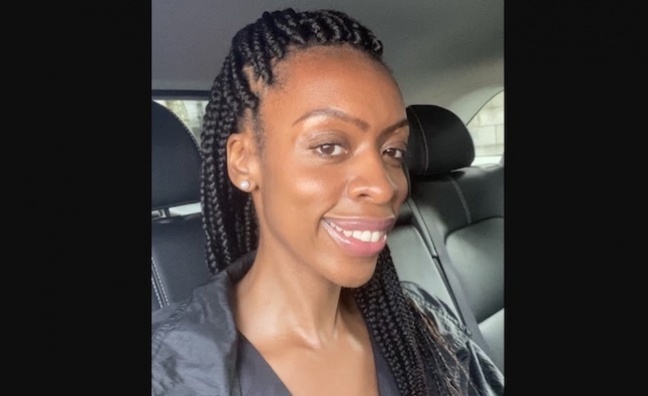 Music Week is teaming up with YouTube Music for the Women In Music Awards in October - Black History Month - with a content series and webinar event, Young, Gifted And Black: Women In Music. Here, Adenike Adenitire meets Eunice Obianagha…

Eunice Obianagha is one of the most exciting project management and event directors working in the music and entertainment space today. She currently runs her own company ENSPIRE Management and among her list of high-profile clients is the MOBO Organisation, where she is director of events and special projects, and has led the show’s production for broadcast for BBC, ITV, Viacom and YouTube.

Also featured within Eunice’s current portfolio is NBC Universal and Eleven Studio, the new agency arm of Eleven Management. She has also previously provided her services to GRM’s Rated Awards, where she was the production manager on their very first live show.

Eunice got her start in the industry as a teen, working as a stage manager for youth social enterprise Bigga Fish. During and after studying for a business degree and her Prince2 Practitioner qualification, roles followed at, among others, PR company The Play Centre which represented artists such as Eminem, 50 Cent and Ms Dynamite, and at live music showcase iluvlive where Ed Sheeran and Jessie J performed in their pre-superstar days.

Eunice’s expertise of all things events has also taken her overseas, where she has worked in Nigeria project managing broadcast and live music productions, including the very first Nigeria-based series of the Nigerian version of ITV’s The Voice.

Eunice, who is also the chairwoman for youth-led charity Small Green Shoots, was chosen as one of the 2021 participants for the Power Up Programme, supported by YouTube, which provides masterclasses, mentoring, coaching, mental health and wellbeing and financial support to 40 Black music and industry professionals to help shatter the glass ceiling and break down doors.

“I’m really honoured to be part of it and to be on that journey with them,” she says. “I was really shocked that they picked me to do it, and I found it quite emotional. It was also really hard for me to post about it because it put a spotlight on me, which I'm not used to.”

However, with all her amazing achievements thus far, being recognised for her work is something that Eunice will definitely have to get used to...

MOBO is an institution, what does it mean to you to have such a key role in there?

“For me personally, it is being able to represent Black music, Black people and our culture in a way that makes people feel proud. So last year I was really touched and humbled by all the feedback that came back, saying, ‘I actually really enjoyed that’, ‘That really represented us’ and ‘That was really needed’. This was a great point of celebration for me because primarily if the audience is happy, I'm happy.

“And also, just honouring the legacy of this extraordinary person, Kanya King, who saw an issue in society and just championed it. This woman's been working for 25 years championing this. And I was so deeply proud of her being given Music Week’s Strat Award recently. I feel really blessed that I've been able to connect with so many amazing people in my career.”

Last year the MOBO awards were broadcast online for the first time, how did you manage the transition and ensure it was still a success?

“So, we were originally meant to be at Wembley Arena, and then we had to kind of reimagine how the show would be. The main thing you've got to think about is how do you maintain the atmosphere, given that there isn't a live audience. How do you still take people on a journey, considering the fact that it had to be largely video-based. So those are kind of the things, along with the technicalities of the behind-the-scenes logistics of managing Covid. That's something we wouldn't ordinarily have had to do before.”

You’ve already worked with a lot of amazing organisations and you are currently working with NBC Universal, what are you doing with them?

“I started working with NBC Universal last year and they're really cool. I'm part of their content and media creation team. I’m their project manager, working with their clients, and overseeing the team across the different departments. It’s a really great team of skilled people working at high level with some extremely high-level clients. It moves at quite a fast pace and amongst all of that, they are just super lovely people as well!”

You've worked on so many events now. If you had to say three things that were the key to a great event, what would they be?

“Firstly, without your team nothing happens so I would say a great event is based on having a really strong team behind it. Also, making sure you are considering your audience in your programming, so that you are giving them something they want or need – something they're going to appreciate and walk away with. Finally, it can be really hard and tiring work at times so my third ingredient is perseverance.”

You’ve worked both in the UK and in Nigeria, managing and running events, what has been your experience like working in Nigeria?

“People in Nigeria are very resourceful. There's a lot that the UK can learn and exchange on with regards to the music industry and event production. There is an innate culture of entrepreneurialism. In fact, we have a saying in Nigeria that ‘Naija no dey carry last’ which basically means, we’re going to come first, make it work and win always (laughs). I really love working there and being able to connect my experiences and networks between the two countries.”

Outside of event management, you are involved with charity Small Green Shoots, what does your role there entail?

“I'm the chairwoman of the board. I've known Natalie Wade, who is the founder, for a number of years, and I joined the board about three years ago. The previous chairperson was Ellis Rich, and I was very humbled to be asked by him and the rest of the trustees to step into the role last year. At Small Green Shoots we take young adults who are interested in being a part of the music industry and we get them ready! We give our ‘Shoots’ the hard and soft skills necessary to be able to go into the workplace and then we find placements for them within the music industry. Many of the people we take in have not gone through traditional education, and many come from quite disadvantaged backgrounds. It is a real honour to be part of an organisation that really makes a difference to young people's lives in an innovative and caring way.”

You have done so much already, but what are your ambitions going forward?

“I’m keen to see how I can upscale ENSPIRE further, attract investment towards this and work with more trailblazing companies and individuals doing meaningful work. I’m super passionate about using my skills to support ideas and ground-breaking work in music and culture. I’m grateful for my current opportunities and looking to the future, I’m open to all the adventures life has to offer.”