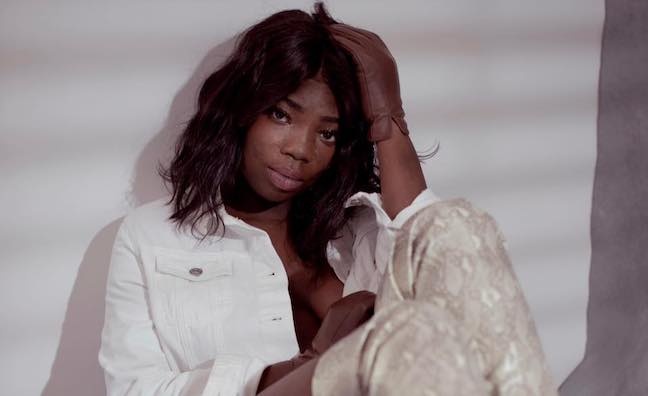 Music Week is teaming up with YouTube Music for the Women In Music Awards in October - Black History Month - with a content series and webinar event, Young, Gifted And Black: Women In Music. Here, Adenike Adenitire meets Namywa…

Namywa, 27, is a recording artist, musician and songwriter whose approach to her music and lyrics is regularly described as ‘fearless’.

Her distinctive style, which merges jazz, soul, R&B and pop, has caught the attention of many, as has her unique voice, whether she’s performing with her all-female band or with just her guitar for support.

Music greats Joan Armatrading and Laura Mvula are two famous names she has been likened to, but Namywa is definitely her own artist.

Fresh off an acclaimed sold-out show at the Symphony Hall in Birmingham, as the support for Paloma Faith, fans will be thrilled to hear she recently finished recording her debut EP, which will be out in January 2022.

Outside of her music career, Namywa runs Girl Grind UK, a CIC (Community Interest Company) she founded out of a deep desire to support Black and Asian women and girls at crucial stages in their development and help them along their personal and professional path. The company is part-funded by charity Youth Music’s incubator programme, an initiative backed by YouTube.

Here, Namywa discusses her company and her career as an artist...

Everyone looks at London as where it all happens, so what was it like growing up as an aspiring artist in Birmingham?

“Yeah, I think the more I got into my career I felt the challenges. I think at first I just had the, ‘Oh yeah, this is great’, as you don't really know the scale of the industry, like you think it’s all the same. And then you start noticing that certain things are not happening where you are, but you just get on with doing what you've got to do. As you progress and do more shows and connect with radio, that’s when it starts to pop into your head, ‘Okay, this industry is massive. How do I move forward?’”

How have you managed to make progress in the past couple of years?

“Yeah, so I had a rebrand around 2020, changing from Namiwa Jazz to Namywa and in that time I got some amazing funding from Help Musicians and MOBO Awards as one of 55 artists, to write and record my debut EP. That's finished now and I'm working with PR agencies to build my campaign from January to March. And it's been a beautiful process to just write with no restrictions or proper timescale. My producers are based in Sweden and some really great music has come out of that. In between that time of rebranding, I went on a few songwriting camps with Tileyard and this opened up the songwriter in me. I’ve got the bug and I want more of it.”

You’ve also changed some things in your band, right?

“Yeah, I've reshaped and remodelled my band and I've now got a female bass player, female guitarist, two female backing vocalists and a female pianist. My drummer is the only male in my band, he’s also a multi-instrumentalist. So, I wanted to switch things up because there's not many women in that space, so it took me a long time to find those people. But it's a good example for people to look at and be like ‘I don't just have to go with what's easy, but what’s right’. I previously had a band of 10 musicians, most of them male, and I could have just stayed with that. But I made the decision to go out and do something that felt more right for me.”

You also balance your career running an organisation called Girl Grind UK, can you share a bit about the work you do?

“Girl Grind UK supports black and Asian minority ethnic women and non-binary people based in the West Midlands on their personal professional pursuit. The company has also opened up a space for me to actually do the other part of why I feel I’m here on this planet, which is to help and empower other people, and to be a plug and make connections.

“We've done six, almost seven, projects this year, one in which we partnered with the PRS which was on some ‘How To’ events. We also partnered with music charity B:Music, which was a sold-out live music night where we commissioned artists to write about their personal experiences of institutional racism. This Youth Music and YouTube project that we're doing is called She Done Did It and, essentially, it's a six-month programme that encompasses my last two years in the industry. Participants get time with a band, time in the studio, and then we are going into London next month for a songwriting camp with Tileyard Education and then a work placement and sessions with MNEK and other songwriters through Tileyard Impact. So, I wanted to create a quicker route for them where it doesn’t take two years like it did for me, and it doesn’t take three grand to go on a writing camp when it can be done a lot easier.”

How did you get involved with the charity Youth Music, which provides access grants to create employment opportunities for young creative talent across the UK?

“It was through their incubator fund, which I realised after I applied was really competitive. I applied in the first round, and no joke, when I didn't get it, I fully cried. Then I had a meeting with them, and they told me the reasons. I also looked at the first wave of people they funded, like Girls I Rate and SBTV, who were all very deserving. And I just looked at that calibre of people and I thought ‘Where do I sit in that?’ and ‘What am I trying to do that's different to them?’ So, I went back to the drawing board, we applied and then got it the second time. Now I'm really building the relationship with them and reporting and evaluating this project like crazy, because every month I want to prove its validity.”

What are you optimistic about in the industry for the next five to 10 years?

“I'm excited for the industry to see who I am, for my space to be created and supported and embraced. I am genuinely excited for what I hope to happen in terms of labels and industry focus and some more attention on Birmingham. I'm excited for things like the MOBOs as I think their last awards online were sick. Kanya's team is absolutely nuts, those performances were mad, and I feel like they had such a short turnaround time, so just watching things like that happen and the quality still being there… That for me was a big deal. I also liked the winners of the BRITs this year. Griff was the first Asian artist to win the Rising Star Award and that for me is timely, but it's different. I like those things.”