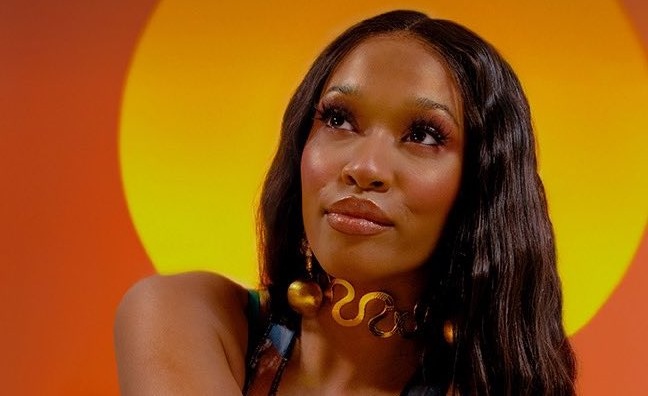 Music Week teamed up with YouTube Music for the Women in Music Awards in October - Black History Month - with a content series and webinar event, Young, Gifted and Black: Women In Music, which can be viewed here.

Singer and songwriter Tamera is really excited about the next phase of her career.

“I'm ready for music now. I’m about to release my first EP, which is insane, and I sold out my first headline show last week, like what the heck is going on?”

It’s not surprising that she is so amped. All of this has been a long time coming for the 26-year-old from Gravesend, who first came to the public’s attention in 2013 as a 16-year contestant on the X Factor.

Last year, Tamera had to put things on pause for a bit due to the pandemic. But she is now back in business and along with some upcoming live shows, she is gearing up to release an EP, her first project.

“These are songs I've been working on over the last year and a bit,” she says. “There's going be visuals to all of them, which I'm super excited about. I've already started the next project as well, so there's going to be a whole lot more new music to come.”

Tamera is also one of the 132 black creators and artists being championed by #YouTubeBlack Voices program.

“YouTube are doing an amazing thing with Black Voices,” she says, “supporting Black artists, producers and writers in the industry, helping to give them a voice and putting them on to different opportunities.”

So, it’s clear that great things are on the horizon for Tamera and although she’s been a part of the industry for a few years now, she is just getting started.

How did you start with music?

“I always loved singing. I always loved the creative side of life. So, I used to draw a lot and paint a little bit more seriously when I got into my teens. I will never forget; I had a descriptive writing English lesson in primary school, and I think I was in year three or something, quite early on. My teacher put up a picture of an old Grecian town with a well. She said: ‘just describe what you think you would hear, smell, see if you were standing there in the middle of the picture’, and it really made me think about writing and, you know, creating pictures in people's heads with words. And that really fascinated me. So that really got me into writing. And I started writing short stories and poems and stuff like that. I did try and write songs when I was young. But you know, I don't think I'd lived that much, so I didn't have much perspective.”

Some people may have first heard of you from your time as a contestant on the X Factor back in 2013, what was that experience like?

“I get so red when people mention it (laughs). But I will say that it was an incredible opportunity, and I’ve learned so much. But when I think back to that little chubby baby that I was then, I was only 16 at the time and I had planned to go to performing arts college. Then I got through to the live shows of the X Factor in my second week of college. I was a bit conflicted about whether to stay at college or go on the show, so I spoke to my teacher, and he was like: ‘You're going to get so much experience in the music industry going on the show, and that's what you're going to college for. So, if you just document everything you're doing we can grade you on it.’ So that was amazing!”

Did the show help you get your foot in the door of the music industry?

“The show was a whole flip side to life, from coming out of school in a small town in Kent and then being in London all the time on TV, it was very weird. At the time I was a little bit naughty and rebellious, and having such a huge opportunity come into my life was a reality check and calmed me down a little bit. After the show I got signed by Simon Cowell’s Syco record label and I stayed there for about three years.

"I left Syco in 2016 and decided to go independent because being on a major label, there were so many people that have an idea of what direction they'd like you to go in, and how to shape you into an artist. If you’re trying to be authentic it can be quite difficult to have so many voices around, so when I came out of that situation, it was important to just ground myself.”

How would you describe your music?

“I feel like it transcends through a few different genres. For sure I would say R&B is like the main thread. I always write about things I'm going through, or a thought process that I've had, or something that I've seen. It's always very personal and I like everything to be cohesive. When I hear a beat, I'll see the colour of the song, if that makes sense? And I always want the music to feel like whatever it is that I'm saying.”

And have you experienced many challenges due to being a woman, or a Black woman in the music industry?

“I try not to pay attention. You know, I feel like there's so many negative things that can happen to us as human beings. We have to deal with a lot. This world in 2021 is very crazy, so I find it easier if I just focus and have tunnel vision. That's why it's been super important for me to find a good team because it's not like something that I want to change too often. I really want to have the same people around like a solid unit.”

What are you most excited about moving forward with your career?

“I’m most excited about performing just because when I started releasing my music at the end of 2019, and at the start of 2020, I was supposed to performing a lot, doing shows, and touring, but then obviously Covid-19 hit, and no one could go outside. So, I didn't do any shows last year at all. I've only just started getting back into it about a month ago, so I'm really excited to perform more and meet people that have been supporting me and see their reaction.”