100 not out: Label execs look ahead to HMV reopening its doors and the centenary celebrations 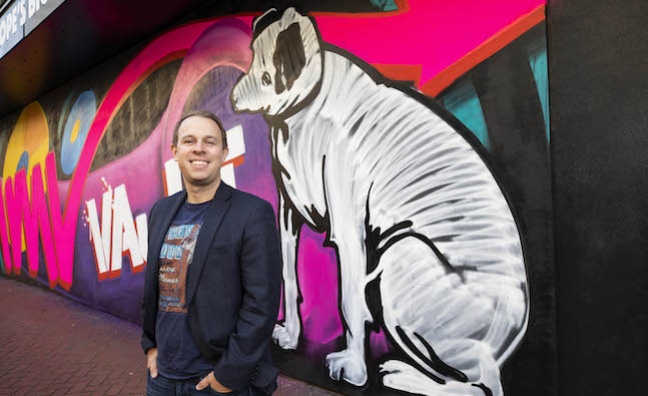 HMV is set to reopen its doors on April 12, as the government eases Covid restrictions on non-essential retail. But what does the future hold for the retail chain after a challenging 12 months?

While the retail sector has been hit during the pandemic, label execs Music Week has spoken to are still optimistic about the future of HMV. It’s also set for a huge boost with the 100th anniversary celebrations in July.

Following a switch to online-only sales in during the third lockdown, the stores will once again return with Covid measures in place according to the latest guidelines.

"We are looking forward to welcoming customers back into our stores, and we are working hard on getting them ready so that we can offer the safest environment for both our customers and staff,” said Patrizia Leighton, HMV marketing and commercial director. “We have taken various steps to allow us to offer flexible access to our stores, which include 'list and leave', 'ring and reserve' and 'click and collect' facilities for customers who wish to minimise their time in store. For other customers who wish to browse and spend more time, we will be operating social distancing measures along with hand sanitising and regulated numbers of shoppers in store."

It’s now two years on from the deal that saw Sunrise Records’ Doug Putman come to the rescue of HMV. He quickly moved to revamp stores, double down on vinyl, open the largest record shop in Europe and encourage more in-store launches.

But it’s been far from business as normal for the latter half of Putman’s spell in charge of the iconic entertainment brand. So what’s the outlook for HMV?

Derek Allen, SVP, commercial at Warner Music, backs HMV’s owner to get the chain through the pandemic – and believes he could even be in a stronger position.

“He's very savvy, Doug, and he knew what he was getting into when he acquired HMV,” said Allen. “He knew it was going to be tough but he had a plan: focusing and doubling down on vinyl was part of that plan and obviously that's being seen to be the right thing. Obviously, there's no way you could have legislated for Covid. Notwithstanding that, a lot of the things that he was aiming to do he's still been able to carry through. In the conversations he's having with landlords and leaseholders, his hand’s been strengthened by the pandemic and its impact across the whole of bricks-and-mortar retail in the High Street.

“Knowing him as an individual, and knowing a lot of people that work in HMV, I still back them to come out the other side of this. If [Covid] has demonstrated anything in terms of where the market’s going, it is that there is still a place for physical music. It may be vastly reduced, but there's definite demand because it's still there with vinyl growing. I think there will always be a physical business.”

Music Week revealed last week that vinyl sales are up again for the year to date. Physical sales were stable last week at 17.8% of the overall albums market, according to the Official Charts Company.

In common with indie retailers, HMV invested in its online operation. There should now be a significant boost from the reopening on the High Street, particularly at a time when supermarkets may be focusing less space on music.

“Music and entertainment in general, probably with the exception of games, has been very tough for them,” said Allen. “So it will be interesting to see how [supermarkets] approach it going forward.”

HMV will also have a captive audience of music fans who are still unable to attend concerts until after the summer and may be looking to use their discretionary spending elsewhere (although a reduced VAT rate is encouraging advance ticket sales).

They’ve got very committed management, their online offering has improved and it's the 100th anniversary to look forward to in the summer

The resilience of the HMV brand was underlined this week with the news that the retailer has secured naming rights to a relaunched venue in Coventry.

When the centenary celebrations roll out in July, it will be another reason for shoppers to visit a branch and for media to cover the story of its evolution and survival as other chains disappeared.

“We’re delighted that they're still there,” said Charles Wood, Sony Music UK’s VP of market planning and media. “They’ve got very committed management, their online offering has improved and it's the 100th anniversary to look forward to in the summer.”

HMV has quietly installed a new managing director, Phil Halliday, who stepped up in August after joining as financial director in June. Previously at ecommerce gifting site Luckies Of London, Halliday has a background in the music industry, including the commercial team at Warner Music.

As well as the centenary celebrations, HMV will have its own vinyl week event, which usually takes place in the summer. Although it is not eligible for Record Store Day (unlike Sunrise Records in Canada), HMV will be able to participate in National Album Day and Love Record Stores, the second edition of which takes place in September.

“After the first lockdown, it was amazing to see how quickly their numbers recovered once they reopened the stores – they got back up and running very quickly,” he told Music Week. “In many cities, HMV is the record store. So there is a real gap there at the moment while they're closed. Once they get their doors reopened, there will be a significant influx of fans back in there shopping for music. I think they'll bounce back very quickly.”

From a distributor and label point of view, we all still need HMV

Following the acquisition by Putman, he commenced a renegotiation with landlords over rents for unprofitable stores. While that was implemented pre-Covid, it ensures that HMV stores are viable as we come out of restrictions. Music Week understands that just one branch – Shrewsbury – will not return as the lease was not renewed.

Drew Hill, MD of distributor Proper Music, said that their business has been “consistent” with HMV during the pandemic and that the chain is geared up for its return to the High Street.

“The government support for business rates and furlough has really helped HMV keep things going through this tough period,” he said. “Doug’s commitment to the chain has been unwavering. Hopefully, we'll see a little bit of a boom on the High Street, whether that means people going out and spending money in an HMV or indie store.

“This year’s all about their 100th birthday. Even through the whole of lockdown, there have been continued conversations with them about plans for their 100th anniversary. From a distributor and label point of view, we all still need HMV.”