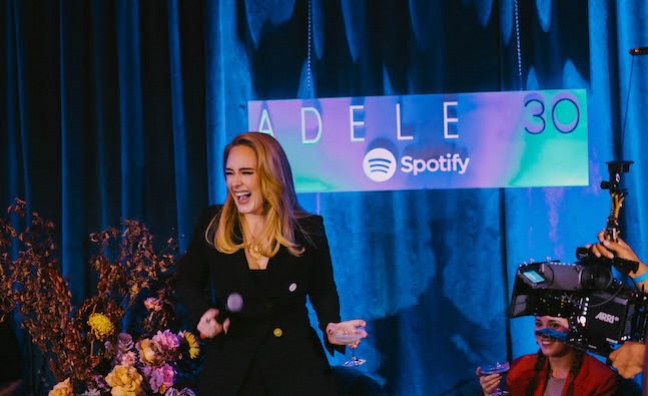 The critical verdict is in for Adele’s comeback album 30.

Now it’s the commercial result that we’re waiting for as Columbia releases the album - Adele’s first in six years - on Friday (November 19). The lead single Easy On Me has already made a big impression on DSPs and radio, so there are expectations for huge numbers for 30 - although it's a record that’s being released into a completely different market (based on consumption) to its predecessor.

“Adele is an artist unlike any other,” Charles Wood, Sony Music UK’s VP of market planning & media told Music Week. “Her record-breaking debut of Easy on Me demonstrates clearly that, whilst the market may have changed, Adele transcends business models.”

As well as being on a new label in the UK (the first three albums were released by XL Recordings), Adele is embracing streaming platforms for the first time with an LP release. 30 will be available across DSPs on release day (unlike the delayed roll-out of 25), as well as on CD, vinyl and cassette.

Spotify marked the release earlier this week with an exclusive listening event (pictured) at Soho Warehouse in LA.

Kim Bayley, CEO of ERA, which represents the UK’s biggest digital services as well as physical retailers, said: “The set-up of the Adele album has been immaculate and the response from the public was immediate. 30 really is the shot in the arm the business has been waiting for. I think people are going to be surprised by the level of demand for the CD format. Heading into gifting season, the timing couldn’t be better.

“More broadly, we remain strong believers in multiple formats and channels as the best way to maximise potential. By embracing all formats, Adele and her team are letting fans choose what’s best for them. This is a very progressive move.”

The release of 30 follows big Q4 sellers from Coldplay, Ed Sheeran and ABBA, whose Voyage (Polydor) is the 2021 album to beat with 203,909 week one sales. The campaign will get a timely boost on Sunday (November 21) with an ITV 90-minute special, An Audience With Adele.

“We’re expecting 30 to sell in significant amounts both in-store and online,” said Phil Halliday, MD at HMV and Fopp. “Adele has a huge fanbase, and the release is perfectly timed for the Christmas gifting season. The landscape has certainly changed since Adele released 25 in 2015, but we’ve seen from the response to our stores reopening earlier this year that there is a huge desire for physical formats.

“What’s more, while we continue to see growth in vinyl, we are also enjoying a resurgence in CDs, fuelled by special editions and deluxe versions that appeal to collectors and fans. These revivals are proof that physical and digital music can co-exist.”

There’s a clear opportunity for increased vinyl sales on this Adele album. Week one vinyl sales for 25 were around 5,000 in 2015, whereas 30 will be chasing a new 21st century sales record of 29,891 set by ABBA this month.

“Vinyl has seen consistent year-on-year growth since Adele’s last album release,” said Halliday. “HMV is stocking an exclusive limited edition at stores nationwide, alongside a special clear double vinyl, and we expect the vinyl format of 30 to be a big part of its overall success.”

Crucially, the vinyl edition is expected to be widely available despite the general pressure on global production.

“[Sony] have given us a great allocation,” said Rough Trade director Nigel House. “Not many other things are getting done [at the pressing plants] what with Adele, Coldplay, Ed Sheeran, The Beatles, they have taken up so much capacity. Hopefully, there will be enough out there for everybody.

“When 25 came out it was crazy, we were selling so many. But I think we’re going to sell a load this time as well.”

“We’re confident that there will be enough stock available to satisfy demand for what is a substantial forecast across the standard and limited edition versions of the album,” added Halliday. “Pre-orders have been very strong, and there is a massive walk-up opportunity throughout the Christmas gifting period with an album of this scale. We expect 30 to be leading the pack through Christmas and into the new year.”