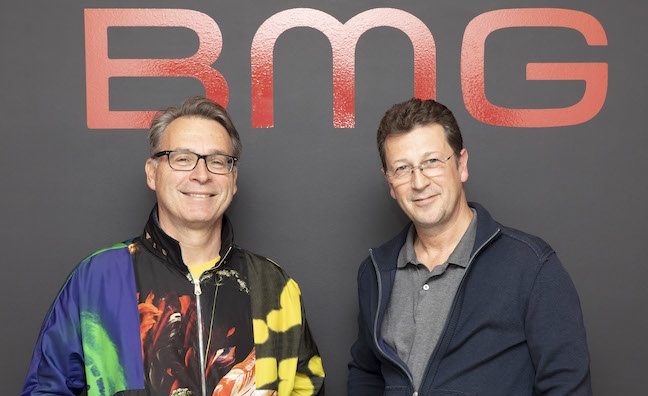 In a Music Week exclusive, Alistair Norbury, BMG president of repertoire & marketing UK, has shared his vision for the label, which specialises in the growing market for resurgent established artists.

Tag8 Music is launching with a roster of household names including Blue, Pixie Lott, Roachford, Louise Redknapp and the cast album of The Drifters Girl musical featuring Beverley Knight. It is the first new label identity to be launched by BMG since it launched in the UK in 2009.

BMG will take responsibility for infrastructure, administration, distribution and finance, while LME will manage marketing and execution.

The new label is pushing for a Top 10 finish this week with its debut release, Heart & Soul by UK group Blue. It is the first album in seven years from the group, who had a run of No.1 albums and singles in the noughties.

In line with standard BMG practice, artists signed to Tag8 Music will retain ownership over their recordings. And the company will no doubt be highlighting its artist-friendly credentials to potential signings.

Logan Media Entertainment represents a variety of artists including Anastacia, Dido, Alfie Boe, Imelda May, Beverley Knight and Picture This amongst others.

LME founder and CEO Craig Logan said: “Established artists increasingly have multifaceted careers in which the new album is just one element of a bigger picture in a way which does not necessarily fit in with the ethos of most hit-driven frontline labels. Tag8 Music gives artists access to a global independent label working closely with both the artist and their manager to help enhance their artist brand on multiple fronts.”

“Our partnership with LME will enable us to open up many of the elements of the existing BMG service for established and proven artists to an entire new cohort,” said Norbury. “These days some labels are not interested unless they can be confident of achieving 50,000 album equivalents or more. The Tag8 Music set-up will be flexible to deliver at all levels.”

Here, Alistair Norbury opens up about further about the ambitions for Tag8 Music and how it can align with underserved artists with a track record of success…

What's the vision for this new label in terms of the artists you are working with?

“It’s clear there’s a whole cohort of previous hit artists – now with successful careers in live, TV, stage or branding – who no longer fit into the contemporary hit focus of the old-established labels. We believe there’s a great opportunity for them and for us to release records in a way which makes artistic and financial sense.”

How does the new label fit within BMG’s existing recorded music operation?

“We make a distinction between label and imprint. BMG has active imprints such as Rise (rock) and RBC (hip-hop), but we tend to have one integrated label infrastructure. Tag8 is different because working with LME we have their dedicated label team, which then taps into the wider BMG infrastructure.”

What does LME bring to the partnership in terms of industry expertise and A&R?

“Craig Logan is the great industry all-rounder. He has done it all – artist [bassist in Bros], label executive, manager – and we have of course worked with him successfully with Dido. Given that Tag8 is about working with artists on their long-term careers, it makes absolute sense that we are partnering with a manager on this. No one else is closer.”

How is the label launch going with Blue? And what's next for those artists covered in today's announcement?

“Blue are a great example of Tag8’s approach. It’s their first new studio album in seven years. There is an incredibly devoted fanbase out there. The record they have produced has attracted outstanding reviews and it is going to debut in or around the Top 10 - yet half of the industry would turn their noses up at it. That’s crazy. The music industry shouldn’t be like the fashion police – our view is that it’s about helping artists with their careers. And that’s what Tag8’s about.”

What areas will Tag8 Music focus on for artists?

“The nature of the projects means that fan-focused editions – including but not necessarily D2C - will play a role, but Tag8 has the great advantage, too, that BMG’s global digital team is headquartered in London. That means access to expertise and reach which is normally restricted to contemporary hit artists. We rule nothing out.”