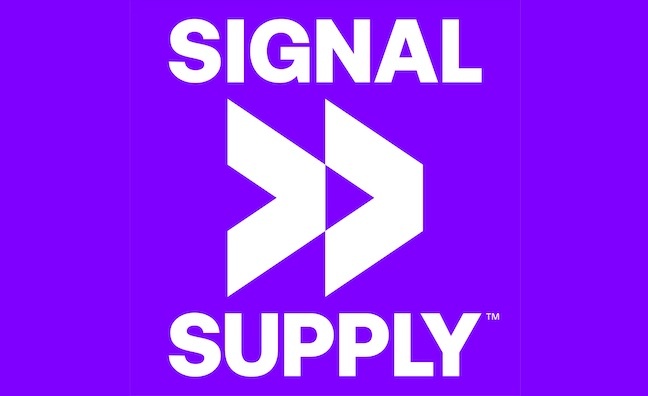 At the same time, it was announced that Tristan Parsons has been upped from senior marketing manager to head of dance marketing.

“The name Signal >> Supply is born from the idea that the DJ reacts to their dancefloor – the crowd signals what they want, and the DJ supplies it,” said a statement.

The branding, which was also revealed today, centres around a chevron motif, forming both a fast-forward and play symbol. It has been designed in conjunction with design studio Koln, known for their work on the Matadero cultural centre in Madrid.

The imprint, which launches on Friday, follows success from Atlantic signings Fred Again.., Joel Corry and Nathan Dawe, as well as international artists including Galantis, Tiësto, Sam Feldt and Skrillex, who have all gained global momentum under the guidance of the newly formed Signal >> Supply team.

Tristan Parsons, who has overseen the launch, said: “This will be the first time ever that Atlantic Records UK has had a space solely focused on finding and breaking emerging DJs and producers and I believe it’s a massively exciting prospect. By using the techniques we know work to break artists globally and championing a diverse range of forward-thinking dance music, I know we can create something special. I’m hugely passionate about dance music and can’t wait to get started!”

Ed Howard and Briony Turner, co-presidents, Atlantic Records UK, added: “Dance music has been a dominate gene in music culture for decades and today feels as influential as ever, so we’re excited to develop a dedicated arm within the Atlantic UK stable in Signal >> Supply. This new imprint will be a breeding ground for Tristan, Kevin and Joe to create a truly subversive roster for a new generation of dance music fans. We’re very proud of all they have achieved and thrilled to start this new chapter with them.”

Parsons, who has been with Atlantic Records UK since 2015, will oversee the day-to-day running of the imprint, which aims to release “culture-defining, timeless dance music from the underground scene”. Working alongside him are senior A&R Managers Joe Barbe and Kevin Christian-Blair.

During his time at Atlantic Records, Parsons has managed the label’s campaigns for Joel Corry, Nathan Dawe, Rudimental, Honne and Fred Again.., in addition to the soundtrack of The Greatest Showman. He will continue to report to Atlantic Records UK general manager, Liz Goodwin.

The first release on the new label is the track Joy from Manchester-based producer Salute. This will be followed by music from Ali Story, Chapter & Verse, James iD and Richie Blacker.