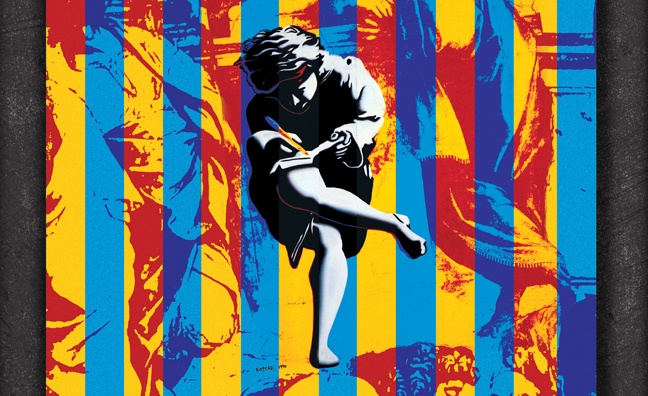 When it comes to rock albums of the 1990s, they don’t come much more iconic than Guns N’ Roses’ double-album opus Use Your Illusion I & II. And this month, both are getting the deluxe treatment.

A new box set edition offered by Universal Music includes 97 songs, 63 of which are previously unreleased, plus a 100-page book with unseen photos and more besides.

Here, Jeff Fura, senior director of A&R at Universal Music Enterprises, takes us inside one of the year’s blockbuster catalogue campaigns, covering remastering, vault raiding and how they plan on bringing their music to a new generation…

Use Your Illusion 1&2 are already regarded as classics – what do you think this one brings to the table? Does it put the record into a new perspective?
“When we identify iconic albums such as UYI I & II and dive into building these extensive Super Deluxe boxsets, it’s due to the fanbase wanting more of their favourite music. This is the first time in the 30-plus years these albums have been available that they’ve ever been remastered, that is one of the most important improvements we’ve done to both of these iconic albums: making them sound the best they can sound with today’s audio technology. To do this, we got the original 1991 flat stereo analogue master tapes transferred to high-resolution 96kHz 24-bit, and Ted Jensen at Sterling Sound remastered from these files. And as several fans appear to want to point out, these original 1991 stereo analogue master tapes did not get lost in the 2008 UMG vault fire, they are very much safe and sound including the original analogue multi-tracks master tapes – all of GN'R’s music catalogue masters are safe and sound in the UMG vault. Upon getting Ted’s remaster, everyone was thrilled and blown away by how the remastering truly made these two albums so much more impactful as rock masterpieces. Then, when Axl reached out to us reminding everyone that the orchestra in November Rain was a synth orchestra and he would like to record a real orchestra, that brought another new dimension to that song and UYI I. The results of the new and real 50-piece orchestra combined with all of the original multi-tracks including the 1991 synth orchestra gave this song a truly impressive and fuller sound – not so new that it’s unfamiliar, but now as it always should have sounded.”

What aspect of release are you most excited about when it comes to new unreleased material?
“The new and real orchestra in November Rain was something very hard to keep close to our chest for more than a year while we’ve been working on the release, but it’s paid off in dividends as the fans are loving it. Typically, the purists usually express their opinions pretty fast and loud – often not in favour of changing something as epic as a song like November Rain, but we’re not seeing that this time; the fans truly seem to be loving the song all over again and even more with the real orchestra. When we reissued Appetite For Destruction in 2018, the emphasis was on all the incredible studio rarities we found, less so on including live recordings, other than live tracks that were originally released as B-Sides. The band’s request to focus on live material for UYI as the bonus material was spot on. The 1991-1993 UYI Tour truly showcased how amazing this band is live and solidified them as the best hard rock band in the world. Considering this era of the band has never released a full concert front-to-start and now fans get two complete concert albums, plus a concert film in glorious HD, is simply an amazing treat for Gunners worldwide and something we’re all proud of producing for the guys. And then there’s the aforementioned concert film. About 13-14 years ago, I was asked to review and catalogue some GN'R video and film masters that were being moved from a third-party vault facility to our UMG vault – at this time I discovered the 35mm film prints of the May 16, 1991 Ritz Theatre in New York concert. In 2020, when the project was greenlit, the very first piece of bonus content we jumped into were these Ritz film assets to determine if we truly had the full show on 35mm film and the multi-track audio masters – we did and we started down the path of making this concert film first by transferring each film reel to 4K UHD for ultimate picture quality and then editing it all together to what we now have in the boxset on the Blu-ray disc. Once we had the concert film approved by the band, we set out to make a music video, not only as a way to highlight the concert film early in our marketing efforts, but also for You Could Be Mine to have an official music video at DSPs. While that song has an epic music video, it features footage from the film Terminator 2 for which the film studio won’t clear the rights to generate revenue from DSPs like YouTube. This song very much deserves to have a music video and the live version of the song from this concert is truly incredible and another piece of unreleased content tied to the project that we are all super excited about.

The band are 100% involved on every detail – their contribution goes through all phases: research, development, mixing and mastering, artwork and marketing

“As an extra bonus note – the Ritz May 1991 concert was originally filmed to capture the band’s performance footage that appears in the original 1991 YCBM music video alongside film footage. Then for the two smaller format Deluxe Edition versions of the UYI albums, we try to keep these configurations to 2-CDs as a series, so with the two concerts in the boxsets being 2 CDs and 3 CDs respectively, a 2-CD set wouldn’t work when combined with each respective album’s need to be on CD 1. We had these other shows from Wembley, Paris and Brazil that were great but we already had two full shows to include in the boxsets, so we selected incredible live performances from each of the five shows to fill up CD 2 in each Deluxe Edition that corresponds with the songs on UYI I and II. Where we needed a bit more content to fill-up CD 2, we selected great cover songs that happened throughout the tour including guest performances from Steven Tyler and Joe Perry from Aerosmith and Lenny Kravitz.”

So how involved are the band in the reissue? What have they brought to it?
“The band are 100% involved on every detail. Their contribution to the project goes through all phases: research, development, mixing and mastering, artwork and marketing. They are busy with loads of show dates, so they are spreading the news and details via their collective band and personal socials and Duff McKagan is even spotlighting the project on his satellite radio show. It’s the support of the band, knowing their brand, their look, their sound, that makes this project as special as it is. Furthermore, the various UMG territories are doing incredible marketing initiatives, some notable ones are Japan’s HMV showcase where they have an 8-foot version of the boxset and in LA there’s a 16-foot version of the boxset’s cover – both allowing you to walk from one-side to the other seeing how the illusion of the two cover designs come to life in a grandiose way, both of which support fan social posting for these experiential moments. The marketing efforts will continue on into the upcoming weeks including a microsite for fans to get into sharing their memories, from getting these albums originally to experiencing the tour and also the reissues.”

We’ve seen huge catalogue success this year with Kate Bush and Metallica getting the Stranger Things boost. To what extent do you think these latest reissues can bring in a new generation of GN'R fans? How well has their music been picked up by Gen Z on streaming so far?
“Anytime we can get the music back into the market with a fresh remaster and exciting amount of bonus material, all generations of music fans get to celebrate together on why they love this music and band. We were very fortunate in getting a similar placement with GN'R at multiple poignant moments throughout the new Thor: Love And Thunder movie over the summer – this gives younger fans, casual fans and diehards a reminder on why this band’s music is so iconic. Now, we get to celebrate these albums by allowing the diehards a way to get new and upgraded material in the music, video content and packaging dynamics; while also allowing new fans the ability to own these albums instead of borrowing their siblings’, parents’ or friends’ copies. All of this elevates the streaming performance. It’s also nice to note that we are on the verge of the original 1991 November Rain music video to make another milestone – it was the first music video from the pre-YouTube era to cross the 1-billion view threshold in 2018, now it’s on course to be the first music video from pre-YouTube era to hit 2-billion views – we’re just shy of this achievement by 40-million views. And in its first 12 days, the 2022 version of the video with the real orchestra audio has surpassed 7.6 million views. These achievements only happen when all generations get into the ring.”

GN'R notably go all out on their reissue – in your mind is it no longer good enough to just do vanilla represses? Is there a sense that you have to go more all out than ever before when it comes to these box sets?
“Keeping classic albums in print is still extremely valuable, especially to fans who can’t spend the premium on the bigger boxsets or deluxe/expanded editions. We have to continue to get GN'R’s music to all fans of all walks of life and make sure it sounds the best it can with today’s audio technology. There are tons and tons of ways for consumers to spend their money, so we take developing these boxsets very seriously, and it’s bands like GN'R who put their trust in us and allow us to spread our creative wings to find fun and exciting ways to celebrate their masterful music and the brilliant album artwork. The band knows their brand, their image, their lifestyle better than anyone else, which is why we are so grateful for their contribution on projects like these, because we do our best to come up with cool ideas on how to reissue projects like this – but the band either likes our ideas or takes it to another level with a tweak to our idea or offer a new one we never thought of. The collaboration is amazing and the results are what you see with the two UYI Super Deluxe boxsets, two UYI Deluxe Editions and regular album reissues in various formats.”