Can Ed Sheeran's Shivers scare off his chart rivals again? 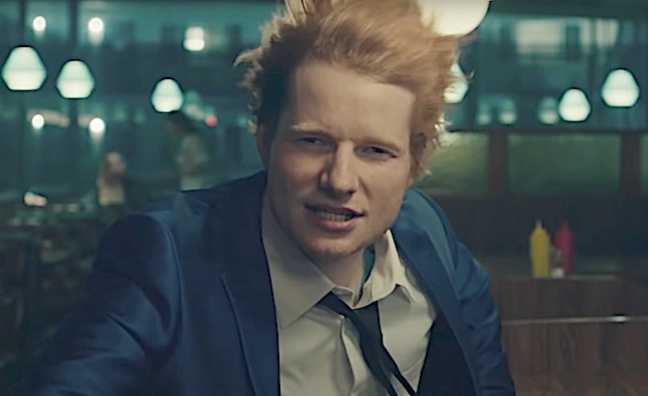 Bad Habits is still at No.1 in the chart, but Ed Sheeran has now dropped the official second single of his = album campaign. Shivers was released today (September 10).

It follows the huge success of the lead track, which is currently battling with Drake and Lil Baby’s Girls Want Girls to retain No.1. Bad Habits has so far spent 10 weeks at No.1 and has sales of 883,539, according to the Official Charts Company.

Atlantic general manager Liz Goodwin told Music Week that the label is targeting more landmark success with the second single, Shivers, in the run-up to the = album on October 29.

“That's the ambition, there’s a little bit of a shorter window into the album, but we’re running so hard at this,” she said. “The single pre-orders and the pre-saves are looking really big. We’re launching with another amazing video. You’ll see how many marketing ideas that video creates in itself. We're really excited for it to come out. It’s another amazing track and also another way to show the breadth of the amazing album he’s written.”

So far, Ed Sheeran’s fans have shown their appreciation of Bad Habits and the promotional track Visiting Hours, which peaked at No.5 (53,338 sales to date).

“From Bad Habits through to Visiting Hours, which was the track that launched when the album got announced, coupled with Shivers, I think those three songs really demonstrate the full breadth of the album that's to come,” said Goodwin. “It’s so exciting to have Bad Habits do so incredibly well. Ten weeks at No.1 is such an amazing result, and it’s the longest-running No.1 since Dance Monkey in 2019. So, it’s just a phenomenal result.

“The launch of [Bad Habits] felt more like a Marvel movie than anything else, with the video and vampire imagery. We’ve treated every single so far like we would if we were releasing an album, and it's really paid off. The music's incredible, the creative looks great, so we're really happy with how we're shaping up.”

Goodwin also praised Sheeran’s commitment to the campaign, in which he’s been ready to support the releases as required, including radio promotion and a concert for HMV’s 100th anniversary.

“He's the hardest-working artist I've ever worked with, he’s just non-stop,” said Goodwin. “He's running at everything, he's just a pleasure and an inspiration to work with.”