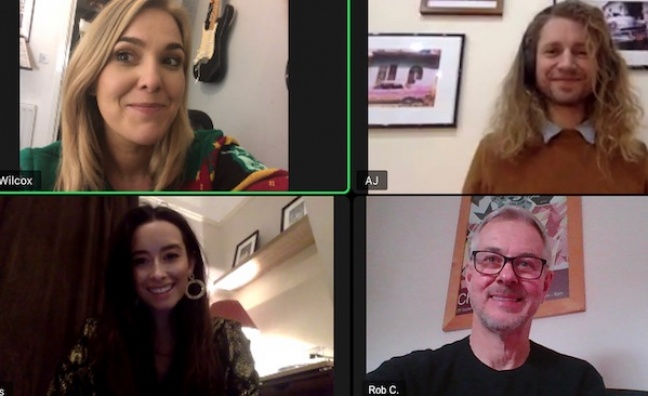 The Wandering Hearts have signed a worldwide deal with Cooking Vinyl.

The Americana-pop-folk trio, who were previously on Decca, have signed an artist services agreement with their new label.

“To say I was surprised when I found out that these guys were out of a deal is a big understatement, so I lost no time in doing a deal for such a talented group of writers and musicians," said Cooking Vinyl MD Rob Collins (pictured with the band). "What a great way to kick off 2021!”

The band released their debut album Wild Silence in 2018 and have won the Bob Harris Emerging Artist Award at the UK Americana Awards.

"The Wandering Hearts have been steadily growing their audience, especially in the USA, having been thoroughly embraced by the Americana community, and we're delighted to be working globally with the mighty Cooking Vinyl, who share in our ambitions domestically and internationally," explained the group's manager Steve Milbourne from Blue Raincoat Artists.

The Wandering Hearts added: "We're thrilled to have signed with Cooking Vinyl for our next and future records. We've really admired their work, label ethos and roster and can't wait to begin working with their fantastic team."

The trio recorded their second album in Woodstock, New York State, during 2020 and plan to release it via the indie later this year.

Last year Cooking Vinyl announced they had added Lawson to their roster.