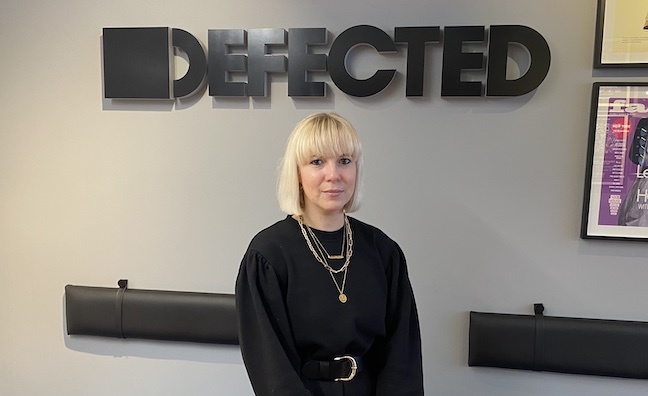 Sarah Beaumont, who spent 16 years at the BBC, was previously co-music lead at BBC Radio 1Xtra and curator of Radio 1 Party Anthems. She was a Music Week cover star in 2018 alongside DJ Target, who stepped down from his 1Xtra role co-music lead role last year.

Combining her experience of producing radio and her ear for new talent, Beaumont will also be instrumental in launching Defected Broadcasting House, a new 24/7 radio channel pegged to debut in 2022.

Launching in October 2020 with John Summit’s Thin Line as its inaugural release, D4 D4NCE has become a major new player in commercial dance. With records from Vintage Culture, Dombresky, Hugel, LP Giobbi, MistaJam, 220 Kid and more, the label reached Top 10 positions in Beatport’s House and 1001tracklists labels of the year charts for 2021.

Label head Wez Saunders helped the imprint to rack up more than 100 million combined global streams in 2021. Saunders will continue with his strategy to target streaming numbers and playlist success throughout 2022 alongside A&R Assistant Oli Welch and the new addition of Sarah Beaumont, who joins as A&R.

Saunders said: “I have had the pleasure of working with Sarah for many years and I am delighted to welcome her and her skillset to Defected. Sarah’s work alongside our head of Media Tom Coxhead on the launch of Defected Broadcasting House will offer our fans 24/7 access to streamable content, whilst together with Oli Welch and I, she will continue growing the D4 D4NCE roster through music signings, writing camps and beyond.”

At the BBC, Beaumont produced an array of multi-genre shows, including launching B.Traits to Radio 1, as well as producing for Friction, Benji B, MistaJam, DJ Edu and working alongside Fearne Cotton, Clara Amfo, Trevor Nelson, Charlie Sloth and DJ Semtex. She also worked across many BBC outside broadcasts and music festivals including Ibiza, Creamfields, Outlook, Glastonbury, The Great Escape and Notting Hill Carnival.

In June 2018, Beaumont was appointed co-music lead at 1Xtra alongside DJ Target, leading the music strategy for the network, booking their annual 1Xtra Live arena line-ups and Live Lounges.