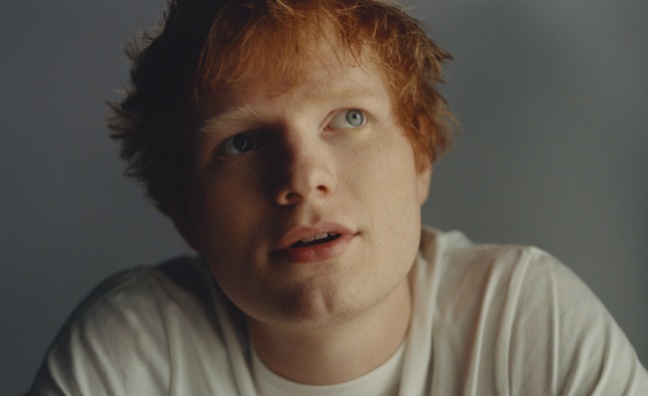 Get used to seeing that name because it’s release day for the singer-songwriter’s = album and we can expect some records to tumble.

The fourth album in his mathematical series will have to go some to beat the opening week of 2017’s blockbuster ÷ album, which moved 671,542 copies in seven days. Since then we’ve seen a move from a payment to consumption model, which means ÷’s  physical sales will be hard to match.

But there’s certainly a streaming record up for grabs, as no one has beaten Ed Sheeran’s week one streaming total for ÷ (78,944 equivalent sales - Official Charts Company) in the last four years despite the constant growth in subscriptions. And ÷’s second week has the second biggest total to date (58,280 equivalent sales), followed by Ed Sheeran again in third place with 2019’s No.6 Collaborations Project (49,858 equivalent sales).

Following a long spell at No.1 with Bad Habits (1,301,061 sales to date), Sheeran immediately followed that with Shivers at the summit (364,006 sales). Overpass Graffiti is the focus track for the album launch, following its preview on TikTok.

Music Week has spoken to execs at Sheeran’s label, Atlantic, since the start of the campaign. Here, we bring the conversation up to date for the album release by discussing the ambitions for = with co-president Ed Howard and general manager Liz Goodwin, and getting some campaign insights….

We spoke before about just how hard Ed’s been working. At this point, what's your sense of how this campaign has been going?

Ed Howard: “Ed certainly hasn't dropped off in terms of his work rate since we last spoke, it's been phenomenal. We've always been able to count on that. Obviously, with the announcement at the weekend [Sheeran was diagnosed with Covid-19], his health is the first priority. No one senses the possibility of letting people down more than Ed; he’s got to be sensible, but he's keen to get back into it as quickly as he can.

“[The campaign] has gone remarkably well. The UK has been amazing, and the story here has been incredible all the way from launch. Spending 15 weeks at No.1 across two singles, and then having the album pre-order launch and Visiting Hours, it feels like we're getting the message of the strength and depth of this album across really well. So it feels really well primed for [release day] and, to your point, as always it’s built around Ed at the centre of it and his work ethic and charisma.”

Liz Goodwin: “There’s just such incredible energy, not only from the label team. And a few of us are actually new to working with Ed from Afterglow into =, so it's really exciting for some of us at Atlantic to do this with Ed for the first time and to witness how hard he works, how talented he is and what great music he makes. But I have to shout out the international label partners. Victor [Aroldoss] and the team over at Warner UK, and Gregg [Nadel], Julie [Greenwald] and all the team at Atlantic US have been amazing. Everyone brought really amazing creative ideas to the table nice and early, so we were able to share quite a lot quite upfront this time, which has been really productive in terms of getting a truly global campaign together.”

How has that Covid diagnosis for Ed Sheeran forced you to adapt this week?

EH: “It's been a period of running around and working out what we can do and can't do, what's safe and what shouldn’t he do. We’re going to absolutely honour everything that we can, but starting from the point that Ed has to get better. Definitely, there's some adaptation that's happening, but we think the set-up that we've done is exemplary, based on his hard work so far as much as anything else. And we're in a great place, so we feel like we'll come through this really well.

What are the expectations now for the album’s sales and streams this week?

LG: “We're really confident that it's going to be a huge release, the biggest of the year so far. And in terms of streaming, it’s going to be Ed’s biggest launch to date in that space. Obviously, streaming is unlikely to make up the type of volume we’ve experienced on previous records. But this is a brilliant record, all the songs are incredible. I think the reviews are going to be amazing, the feedback has been great, and we feel like we've created a really engaging, modern campaign that reflects the times that we're in. And I must shout out our head of marketing, Sam Spencer, for everything that he's done running the campaign from a marketing perspective so far, and to director of audience, Nick Long, for his digital expertise.”

EH: “I think it's important from the get-go that we tried to do things we hadn't done before. We tried to innovate, musically and campaign-wise, and we tried to run our own race and not look backwards too much and compare ourselves to the incredible, stellar success that Ed’s had in the last decade. We think it will stand up well in terms of those comparisons as well, but it was very important that we ran our own race, made a brilliant album creatively, great videos, great campaign, and we focused really solidly on that. We think we've done a good job so far.”

Ed Sheeran has worked with TikTok and YouTube Shorts for the album roll-out. Has this been an exciting campaign for embracing new ideas since the last solo album?

EH: “It has, and what's great is that Ed is an artist with a massive profile, so all the partners love him. He's got great history with the people involved at these companies, so that's a great place to start from. Coming into a new campaign with a superstar artist, you've got amazing potential and possibility in terms of the audiences that you can reach. TikTok was a perfect way to test that and kick it off. Where we started the year in terms of fanbase on that platform and where we are now at eight million [TikTok followers] at this point is testament to the exemplary work that Ed, our team, management and also TikTok did, really leaning in to make that livestream super successful; but also the work leading up to it to kickstart his fanbase, and since then to keep it moving. I now feel that he has a real voice there and a following, which he didn't have at the start of the year. So that's definitely been key.”

We tried to not look backwards too much and compare ourselves to the incredible, stellar success that Ed Sheeran's had in the last decade

LG: “Ed's going to triple his following soon from where we started, so it really is incredible growth on that platform [TikTok]. The Shorts campaign for YouTube, it's a preview of the album as short clips. We worked with them really closely and they've given us an absolutely unprecedented amount of marketing support - huge global influencer campaign, premium platform profile - and we have the Shorts directed by Jason Koenig, who also directed the Overpass Graffiti video. It’s absolutely flying, we had almost 10 million views on just the Shivers Short [after a day].

“Aside from that there’s the incredible First Listen event happening with Zane Lowe for Apple Music [last night, October 28]. We’ve got the Equals Listening Experience pop-up in Shoreditch with Amazon, where people can immerse themselves in a 360 listen of the album in an amazing creative space. And we’ve got a very exciting announcement to come with Amazon. Spotify have just given us the most incredible support on all the singles, and we have an on-platform world first. Spotify has created Experience EQUALS, a never before done on-platform format, where fans can connect with the album through exclusive content, personal videos from Ed, purchase merch and share content to social media."

“Our partners have been incredibly supportive. I just think we'd like to thank everybody for all their hard work. Ed was a big part of that right at the beginning, he jumped on 10 to 15 Zoom calls from his treehouse and just played four or five tracks to everyone [at streaming services], really upfront and answered loads of questions. I think everyone at the DSPs just felt like part of the family right from the start, which was really important for us and for Stu [Camp], Gaby [Cawthorne] and Ed himself.”

What about future singles after Overpass Graffiti?

EH: “Obviously, in this day and age, we need to read the market somewhat once the record’s out. Overpass [Graffiti] is our single, that’s what we’re working for now. It's possibly my favourite track on the album, so I’ve got very high hopes for that as does Ed. And then our plans for Christmas and beyond we’ll formulate over the next six weeks, and then into next year. I think there are two, three, four brilliant single options off the album, and it's going be great to see how they settle and live in the world. I feel very confident for next year.”

What have been the highlights for you in terms of the media he’s done for this campaign?

EH: “I think Damian [Christian] and his team have, as ever in their promo world, absolutely smashed it. Kicking off with the 1 Big Weekend prior to the launch of the single was really cool, it was a nice message to come back and do something that wasn't related to selling the single and just set him up again as a great live performer. Personally, I loved the James Bond Graham Norton Show, that was brilliant. I also really enjoyed the Earthshot Prize last week, the performance of Visiting Hours. The context of the show and the backdrop is obviously a very crucial cause, but also his particular performance and that song, I loved. And there are too many wonderful radio moments to mention.”

LG: “We had a great moment at the GQ Men Of The Year Award, where he won the Solo Artist award. He actually shouted out Claire Coster, Atlantic’s head of publicity, for all her hard work over the last decade, because they've been together since the start. It was presented to him by Stormzy, who did a brilliant speech, it was amazing. And we've been really focusing hard on podcasts as well, which is a bit of a new area for Ed, including the Off Menu podcast with James Acaster and Ed Gamble. It was their biggest ever episode of that podcast so far. We've also got some special film content pieces left to drop too with a lot of media partners, so they’ll be coming bang on album launch.”

What’s the plan for the second album that’s been discussed? Will there be new music soon, or is = going to be a long-term campaign before any further release?

EH: “I think it's the latter, based on the incredible music that we have on this album. I feel like we've got so much to achieve with this album that we will be on this for a while, before we start working new music from a new album for sure.”

LG: “One of my mantras is that we need to cover at least two Christmases with = !”