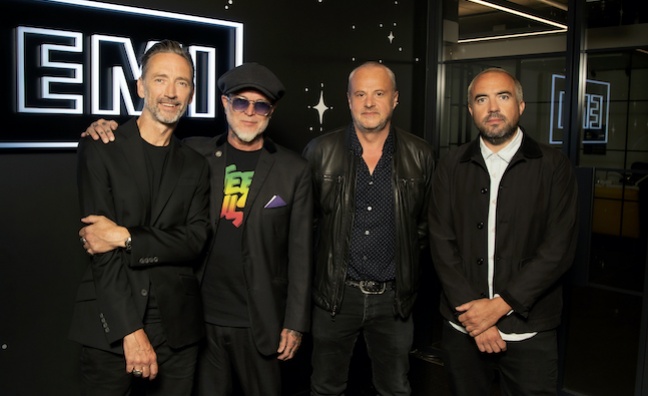 The company has teamed with the major label on the Funhouse JV to help push heavy music further into the mainstream. It will include acts on the Raw Power roster as well as bands represented by other management companies.

Raw Power has had huge success over the past 16 years with major rock acts including Bullet For My Valentine and Bring Me The Horizon, who have 11.5 million monthly listeners on Spotify. Now the company is forging ahead in partnership with EMI Records. Manchester-based rockers The Blinders have been unveiled as the Funhouse JV’s first signing.

“In the last four or five years, we’ve broadened our roster and we saw The Blinders as something a little different,” said Raw Power CEO and founder Craig Jennings. “We picked them up pre-pandemic and then this opportunity came along with EMI at the end of last year. We started talking to [EMI co-president] Rebecca Allen and [MD] Clive Cawley about setting up a new alternative rock label that we would A&R. We thought The Blinders would be a perfect fit.”

Raw Power’s commercial director Don Jenkins says it was a case of right place, right time for the JV.

“EMI was experiencing an upturn in streaming across its roster, particularly in rock, and was looking to enhance its A&R structure,” he explained. “We’ve always had a label wing to what we do, and it just so happened that we were looking to find a new partner and it was a bit of a meeting of minds. EMI is a fantastic label and we’ve got core skills in the rock market. So we’re hoping that we’ll end up with a JV that is pretty great.”

Raw Power has previously operated its own Search And Destroy label and JV with Universal’s Spinefarm Records. The imprint remains with Spinefarm and will continue to release music by acts including Bullet for my Valentine, Atreyu and While She Sleeps.

Jenkins, who joined Raw Power 10 years ago after spells with Amazing Radio, Mflow and Universal, stressed that A&R is part of the firm’s DNA.

“We’re a management company, but that has always involved finding acts at a very early level, developing their careers and becoming, if you like, the de facto A&R person,” he told Music Week. “Artist development is the core of what we do, even our biggest acts like Bring Me The Horizon and Bullet For My Valentine were new bands when we took them on. The entire ethos of what we’re trying to achieve is for Raw Power to bring its artist development expertise to a company like EMI, source bands at the start of their careers, and develop them into international global propositions.”

Craig Jennings expects to add to the Funhouse roster before the year is out.

“The target is to look at maybe two or three acts a year,” he revealed. “They’re not necessarily going to be acts that we manage. In fact, we like the idea of just being A&R to some acts with strong managers we know and get on with, so we will be spreading our net to the wider rock community.”

Outlining why the arrangement makes sense from EMI’s perspective, MD Clive Cawley explained that the company was keen to broaden its interests within the rock genre.

“In terms of streaming, guitar music has been a little bit neglected,” he told Music Week. “And Raw Power has a really good vision for developing new and exciting artists. They came up with the name Funhouse, which I love, and the first act they brought to us was The Blinders, who I saw at The Social and thought were fucking incredible. Basically, Funhouse will be an additional A&R resource for us at EMI. They will bring the talent and the marketing and we’ll do the rest. I think Craig, Matt and Don are amazing, so they’re not going to bring in acts they know we won’t be interested in. It will give EMI another arrow in our quiver, so to speak.”

In other big developments, Raw Power has opened a Japan office in Tokyo, in keeping with a wider plan for international expansion. The new office is in addition to its London and Los Angeles headquarters.

Raw Power has been gearing up US band The Mars Volta’s first album in a decade, due out today (September 16). Raw Power’s US head Matt Ash, who joined Jennings as BMTH co-manager in 2008, said that it is in the process of expanding its LA base, which opened in 2011.

“It made sense to be in America,” he said. “Our first US band was Of Mice & Men and we then started managing Gone Is Gone, which led to At The Drive-In, which has in turn led us to The Mars Volta.”

Look out for the new issue of Music Week, which is heading to subscribers now and will be in shops on September 20. Subscribers can access the interview online and via the Music Week digital issue app next week.