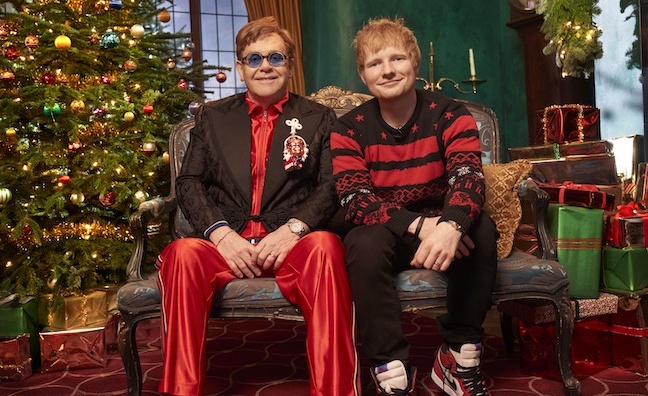 Christmas is still almost a month away but there are already signs of a streaming surge for festive songs.

Radio networks are also changing their output for December with Radio 2 confirming that it will play Christmas music from today (December 1).

The genre - which is being tracked by the Official Charts company from this week - made its first Top 20 entry on Friday (November 25) with a 36-18 climb for All I Want For Christmas Is You by Mariah Carey. Last Christmas by Wham! moved 42-23.

Christmas music is now set to flood the first chart of December on Friday, with Carey and Wham! Moving into the Top 10, new Top 20 appearances by Ed Sheeran & Elton John (pictured) with Merry Christmas and Brenda Lee with Rockin’ Around The Christmas Tree, and further entries in the Top 40 by Michael Buble, Ariana Grande, Shakin’ Stevens, Kelly Clarkson, The Pogues & Kirsty MacColl, Band Aid, Bobby Helms, Chris Rea and Lizzo.

Of course, classic catalogue is penalised by Official Charts Company ACR rules, which means it has to stream at double the rate of new releases to achieve the same chart ‘sales’.

Lizzo's Someday At Christmas, at No.40 in the Midweek Sales Flash with consumption up 139.4%, is a new Amazon Original cover version and so is not subject to ACR. Amazon has previously been a contender for a festive No.1 with a Jess Glynne cover of This Christmas.

Both All I Want For Christmas Is You and Last Christmas have previously overcome their ACR penalty and claimed the official No.1. Classic festive chart-toppers are now looking likely in 2022, too.

Unsurprisingly, the vast majority of the festive tunes are catalogue tracks. But Merry Christmas by Ed Sheeran & Elton John, first released last year, is emerging as a new perennial. It was the 16th biggest Christmas track last week on 1,170,033 streams.

The third biggest festive song of last week - and a possible No.1 contender - was Rockin’ Around The Christmas Tree by Tree Brenda Lee on 2,189,494 streams. It made No.25 on the combined streaming chart (surging 92-42 on the official singles chart).

At this point last year, Fairytale Of New York by The Pogues and Kirsty MacColl was the third biggest festive tune based on streams. It is No.7 for Christmas songs streamed in the past week, but it still has time to catch up.

As Radio 2 turns to festive music, the station has revealed the Top 40 Most Streamed Christmas No.1s ever, as compiled exclusively by the Official Charts Company for Radio 2 and BBC Sounds. It is based on total streams since release for each track, many of which are not actually Christmas songs.

Helen Thomas, head of Radio 2, said: “Our yuletide gift for the Radio 2 listeners is to kick off our festive tunes today, as well delivering as our Christmas No.1 singles chart on BBC Sounds and Radio 2. This rundown is a brilliant trip back through the decades, with a perfect mix of the timeless Christmas tunes we love and the hits that have since become classics – it’s the perfect festive soundtrack!”

Martin Talbot, Official Charts Company chief executive, said: “We are delighted to have partnered with Radio 2 to create what will be the ultimate showcase of the nation’s favourite Official Christmas Number 1s – even if some of them are not particularly Christmassy! Lists like this are a fascinating reminder that the great British public know what they like, even if their choices are not always the most predictable.”