'He's a one of a kind artist': Columbia MD Manish Arora on Robbie Williams' Christmas LP 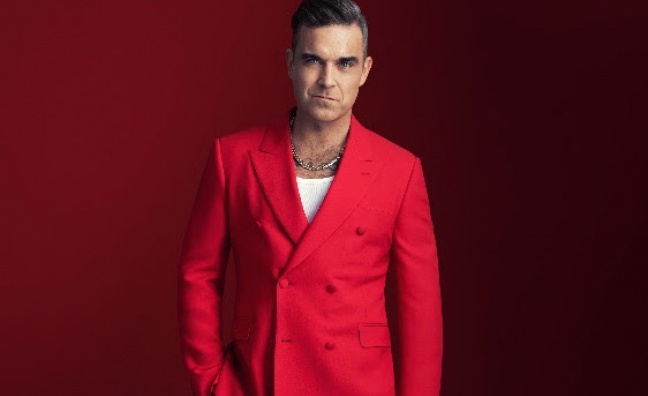 The Christmas Present, which is released today (November 22), is Williams' second studio album since signing to Sony Music in 2016.

"We’d obviously love for the album to became a part of everyone’s festive celebrations this year and for years to come," said Arora. "There’s a real sense of fun and celebration to it as you’d expect, so the hope is it becomes the first iteration of an-ever evolving Christmas album that can be refreshed with new material down the line."

The double album features two discs – Christmas Past and Christmas Future – both including a mixture of original songs and Christmas classics, with some star guest appearances including Rod Stewart, Bryan Adams, Jamie Cullum and boxer Tyson Fury.

"From the off it was important to us that this didn’t feel like just another Christmas album and we got across the fact that, whilst there are new big band and swing versions of Christmas classics on the album, there are also a whole host of great new compositions from Robbie and Guy Chambers that stand alongside and equal to their previous work together," explained Arora. "To help with this we devised a past and present aspect to album to help with the messaging around it, and made sure we focused on dropping multiple IGs [instant grats] that showed both sides of the album.

"However, there were still a number of timing challenges to overcome. Going in we knew getting Christmas songs played in October when the album was announced wasn’t going to work and doing pre-release promo was going to be difficult even in early November, so we focused on a strong album visual on socials instead. Again, the weekly multiple IGs and accompanying visuals have allowed us to get news out to the fanbase while we hold back our main single, Time For Change, for airplay in December."

Arora said that it was important that the album felt like an authentic representation of Williams' own experience of Christmas.

"With this in mind, we looked to involve Robbie’s family in the album campaign," he said. "His father Pete features on the album, our main video for Time For Change has been filmed at Robbie and [wife] Ayda’s home, and there is a soon to be launched Christmas podcast that features even more of Robbie’s family and friends.

"Christmas is all about family, gifting, fun and celebration after all, so we hoped to capture all those elements in the pre-release roll-out of music and offerings on the D2C store too. Every song on the album has a warmth and familiarity that can only make you smile."

Williams, who stars on the cover of the latest issue of Music Week, will shortly be hitting the promo trail with appearances at BBC Radio 2 In Concert (November 29) and the Royal Variety Performance, and two shows at The SSE Arena, Wembley (December 16-17), billed The Robbie Williams Christmas Party, along with an ITV special.

"He’s a one of a kind artist and it’s always an honour to work with someone who’s achieved so much," said Arora, who previously worked with the former Take That star during his time at Virgin Records. "I can safely say his drive and dedication to what he does is as potent and infectious as it ever has ever been."

"It’s been a total joy to work with [them]," he said. "It’s been a super collaborative campaign with everyone pushing each other and we’re all looking forward to what’s ahead going into Christmas, when the campaign truly comes alive."

Click here to read the full Music Week interview with Robbie Williams and his team.