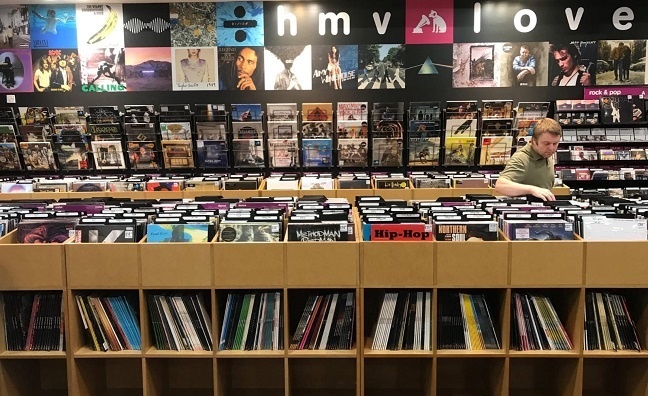 HMV is to take part in the Love Record Stores retail campaign on Saturday (June 20).

The move to bring HMV into the campaign will be a welcome boost for the music chain following its return this week following three months of lockdown. Music retailers have returned this week under the government’s Covid-19 guidance, though a large proportion of indies are delaying reopening because of the social distancing restrictions.

PIAS MD Jason Rackham, organiser of Love Record Stores, said: “HMV are as valid as any record store and they’re an important part of the market. There was no question for me that when we do a Love Record Stores campaign, we include all record stores. So they were involved very much from the start, and very much part of the communications when we started putting this together.”

HMV was forced to put its annual Vinyl Week initiative on hold this month because of the lockdown. The chain expanded its vinyl range last year.

ERA confirmed to Music Week that are were no plans for HMV to be involved in Record Store Day’s three drop dates later this year.

“The original date of Record Store Day was actually April 18, so June 20 was already a postponed date,” said Rackham. “When they were forced to move the date again, we were in communication with Michael [Kurtz, founder] at Record Store Day. Kim [Bayley, CEO] at ERA gave us a fantastic quote of support for this online event.

“We’ve got significant artists around it, as well as the trade bodies and labels. We've got mainstream media coming on board. So I think this is going to get blanket coverage. There’s no doubt it’s going to cut through.”

To read the Tim Burgess cover feature, subscribers can click here. The interview with Jason Rackham is here.