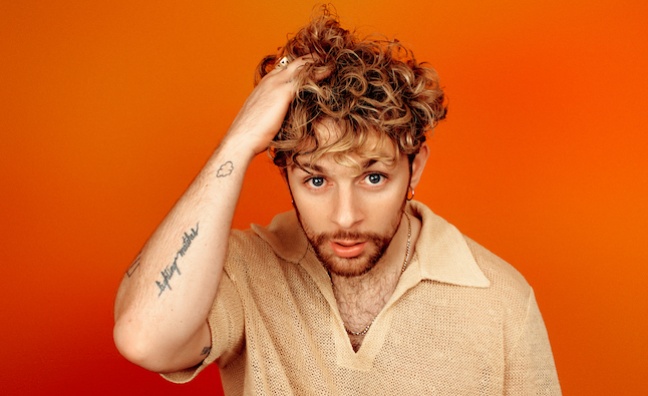 Tom Grennan has been making his mark in the past 18 months with the campaign for his No.1 album, Evering Road.

As well as earning his first chart-topper with the sophomore album, the UK singer-songwriter made an impression on the singles chart for the first time last year.

Tom Grennan’s breakthrough has now been underlined by the PPL Most Played Tracks Chart for 2021. While Ed Sheeran came out on top, Grennan has secured his first ever entries on the rundown at No.2 (By Your Side as a featured artist with Calvin Harris) and No.3 (Little Bit Of Love).

While Grennan has made his first appearance on the PPL tracks chart, Ed Sheeran was once again triumphant.

Sheeran was ranked the most played artist of the year in the UK and his hit Bad Habits was the UK’s most played track. It is the first time he has held both top spots in PPL’s Most Played Charts since 2017, when ÷ was released and Shape Of You dominated the airwaves.

No artist has managed to top both charts twice. Adele is the only other artist to top both charts, with Rolling in the Deep and the popularity of its parent album 21 in 2011. It is also the fourth time in five years that Sheeran is the UK’s most played artist. He lost out to Dua Lipa in 2020.

The fifth most played track of 2021 was Higher Power by Coldplay. In the last 10 years, they have had two tracks featured in the Top 10 Most Played Tracks Chart: Something Just Like This with The Chainsmokers (No.7 in 2017) and Adventure Of A Lifetime (No.10 in 2016).

David Guetta’s two entries in the Top 10 helped him to second place in the overall Most Played Artist Chart, followed by Dua Lipa in third.

Little Mix are the fourth most played act of 2021 and have been in the Top 10 in each of the last five years.

Pink is in 10th place in the chart. PPL reported last year that she was the UK’s most played female artist of the 21st century.

Peter Leathem, CEO at PPL, said: “Congratulations to Ed Sheeran for having the UK’s most played track of 2021 and being the UK’s most played artist of 2021. His chart-topping success over the last five years is a testament to not only the quality of his output but also the strength of UK music at a time when the global music landscape is more competitive than ever.

“PPL plays a vital role in the UK music ecosystem, collecting royalties when these recordings and hundreds of thousands more are broadcast on TV, radio and played in public, with total revenue of £252.8m in 2021. Both the performers on a recording and the recording rights-holders benefit from these royalties, providing an important revenue stream for many in the music industry, from household names to those just starting out.”

PPL’s Most Played Tracks Chart of 2021

2 By Your Side - Calvin Harris Feat. Tom Grennan

6 All You Ever Wanted - Rag’n’Bone Man

PPL’s Most Played Artists Chart of 2021