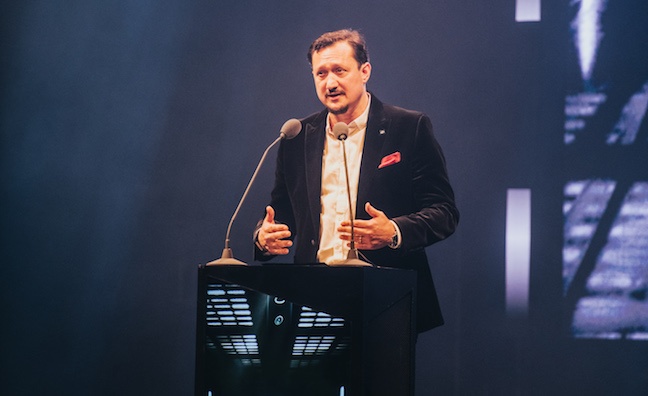 The AIM Independent Music Awards is going ahead (August 12) with a virtual ceremony featuring performances and even the option for online viewers to tuck into a hamper of goodies during the ceremony, include Signature Brew beers.

In the latest issue of Music Week, AIM CEO Paul Pacifico looks ahead to the ceremony and opens up about the impact of Covid-19 on the indies.

“It’s a really tough year for everybody,” said Pacifico. “Having a moment to celebrate and come together as a community is all the more important to reinforce the message that there has been significant independent success to celebrate, as well as creativity, resilience and the fact that independent businesses are very nimble through a crisis.”

AIM has also rolled out an app for this year’s online awards.

“It will provide all kinds of interactions, so there will be enhanced content and an enriched experience,” said Pacifico. “I hope it will give that sense that the awards are coming to life as a shared experience.”

Polish pianist Hania Rani, London singer Greentea Peng, Flying Lotus and Floating Points are all nominated in two categories each, while other acts in the running include Fontaines DC, Idles, Laura Marling, FKA Twigs and Nick Cave & The Bad Seeds.

“The AIM Awards really shows off the strength and depth of diversity across the independent music community, where we're able to celebrate such a broad range of artists, genres and types of business,” said Pacifico. “It's the most diverse list AIM has ever delivered.”

A new award for Best Remix has been introduced this year.

“We brought in a Best Remix category for the first time because we feel that's a key area of music, especially for independents who express creativity through remixing as well as the release of new and original work,” said Pacifico. “I think it's great to be able to recognise that, and it helps to have awards that reach areas of music and the community that might not feel as at home in some of the more traditional awards categories.”

Little Simz has been named as winner of the Pioneer Award in association with Evoke. She has recently renewed her deal with AWAL, following last year’s Mercury Prize-nominated Grey Area album.

AJ Tracey is this year’s recipient of the Innovator prize (in association with Amazon Music). The UK rapper, who operates his own label with management company Supernature, has racked up more than a billion streams globally.

IMPALA executive chair Helen Smith will be recognised with the Indie Champion Award in association with MCPS.

“The European Copyright Directive was one of the most important pieces of legislation of the last decade for the music industry worldwide,” said Pacifico. “Its impact will be worldwide, irrespective of what happens in the UK, and Helen's role in making sure that the independent voice was loud and clear on every aspect of the negotiations in Brussels was crucial.”

The virtual ceremony will launch at 7pm on August 12 via the awards website and SBTV’s YouTube channel.

To read the full interview with Paul Pacifico, subscribers can click here.