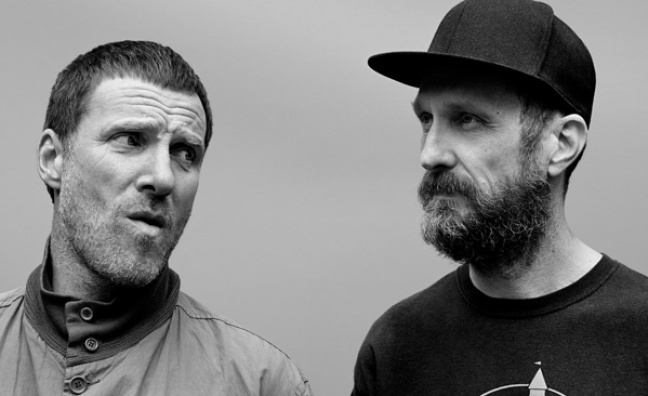 Having self-released most of their records, Nottingham duo Sleaford Mods found a home at Rough Trade Records to release 2017's English Tapas before promptly quitting the label.

As you'd expect from company with experience of dealing with the likes of The Smiths, a little bump in the road proved no issue and Jason Williamson and Andrew Fearn re-signed with Rough Trade late in 2019. It seems to have been a good choice.

Last year's career-spanning collection All That Glue went in at No.10 last year despite being marketed and released during the first lockdown.

What made you rekindle your relationship with Sleaford Mods after they left Rough Trade?
Geoff Travis: "One of our favourite songs when we were young was by Dan Hicks and His Hot Licks, it was called: How Can I Miss You If You Won’t Go Away. Well, the Sleaford Mods did go away and we found that we missed them."

The band have a strong live following - having now released the last two Sleaford Mods records in lockdown how have you coped without this element to the campaign?
Lisa Goodall: "It’s a shame not to be able to have Sleaford Mods playing live, but it has inspired both Rough Trade and the band to be as creative as possible. It’s also actually raised the bar a bit. Last year’s collection All That Glue went Top 10 in lockdown 1 so we’ve really tried to match that now we find ourselves in lockdown 3. We even ended up making a TV show from home this time…"

Sleaford Mods actually seem very keen on their own social media activity, how have you been able to utilise their efforts in this campaign?
Jeannette Lee: "It’s always a good feeling in a record company when all the elements of a release come together without pain: Music, artwork, videos, social media... all sending the same message and looking great. We have that with Spare Ribs."

As mentioned, the band made their own TV show for the week of album release, was this an attempt to do something different to the livestream gig you did last year?
JL: "SMtv is a refreshing view into the world of Sleaford Mods; direct and honest, it gives a fascinating insight into the way they work together. The relationship between Jason [Williamson] and Andrew [Fearn] comes over strongly and clearly. The show had electrifying performances from the 100 Club livestream, videos from Spare Ribs and interviews with collaborators such as the mighty Amy Taylor from Amyl And The Sniffers, the talented Billy Nomates – two top women! – and a cameo from long time supporter King Iggy Pop. It also features lots of laughter, which might have surprised some people..."

How important has D2C been in this campaign?
LG: "The label and the band’s webstore both had exclusive versions on the LP plus a cassette. It was important for us to have parity, so all messaging can remain consistent and we can both support each other’s posts on socials without running into problems. Mods have a fantastic engaged fanbase and our D2C offering has been is highly tuned into their audience."

How important will indie retail be – how can you work around a lockdown that wasn’t part of the original plan?
LG: "Indie retail is big for us. Each campaign we look to do something bespoke for independent shops, and any requests that come in during the campaign we listen to and react to where possible. Indies had an exclusive green press of Spare Ribs and Mods have done various social posts promoting it and encouraging fans to support their local stores. The shops also had some signed prints, gig ticket give-aways, test pressings and other extras and some shops received cut out standees of Jason and Andrew to display. It has been brilliant to see how creative they’ve got with the figures. Banquet made a TikTok video, while Longwell Records recreated the Mods' own Late Night With Jason social strand using theirs. Maybe not having customers coming through the doors has helped to ramp up the shops' imaginations..."

What are the international prospects for the album? How are you overcoming restrictions on promo?
LG: "The band have become a a truly a global phenomenon over the last five years and they have had support for this release from right around the world. US sales have been strong – our colleagues in the States believe they could even sell out their stock. We had a fantastic launch pad for the whole campaign with the band performing live on Seth Meyers' TV programme, so the interest is obviously high. We have also done some territory specific retail marketing with Test Pressing competitions in Australia and America, while the US store Newbury Comics had a signed sleeve available with pre-orders.

"Australia has always been a key market for the band and luckily they got to tour there early in 2020 before the lockdown. Support has continued apace, with playlists on Triple J radio and heavy rotation on music channel Rage. We have also had radio playlist presence in France, Australia, Germany, Denmark and Canada. In Germany there was also a TV special on the band on one of the biggest networks ARD and it looks like we will achieve a decent chart position.

"International press has been brilliant too. Obviously it helps having a band who are not afraid to talk about how the world is in such a turbulent times, but our teams have done a brilliant job to secure covers in Germany, France, Italy, Denmark, Australia, plus some great press in Latin America. Influential Brazilian music journalism channel, Kazagastao on YouTube, also has picked up on Spare Ribs and featured a big interview with Sleaford Mods. Britain might be cutting ties with Europe, but with Spare Ribs, Sleaford Mods have been busy cementing new bonds across the globe."

Given the political nature of some of the lyrics and the ever-changing situation, do you expect to hear new material from Sleaford Mods soon?
GT: "It’s what they do. Andrew has always made music in his unique and masterful style. Jason has always written and used words to describe the world around him and his aim is to become a master of his craft. The work never ends. Our job is to provide an environment where they feel valued and are confident that Rough Trade is doing justice to their work out in the wider world."