Inside Warner Music Group's first day on the stockmarket 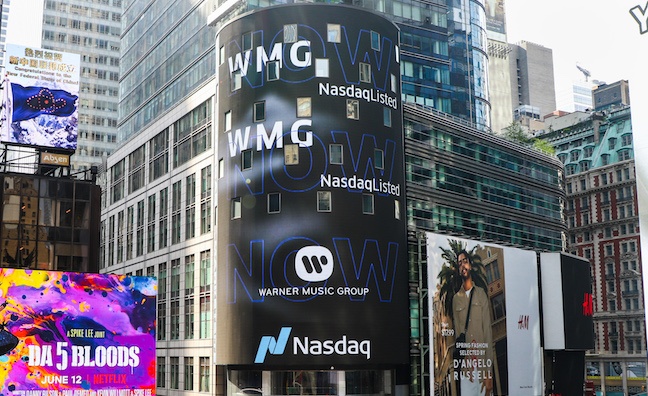 After Happy Monday and Black Out Tuesday, the music industry’s rollercoaster week took in Warner Wednesday, as the Len Blavatnik-owned music major finally launched its IPO on the Nasdaq stockmarket.

Despite delaying its share pricing by 24 hours and, according to sources close to the situation, cancelling a round of investor meetings so that it could participate in Tuesday’s music industry blackout, WMG enjoyed a near-perfect first day on the markets, opening at $27 (£21.44), up from its initial $25 (£19.85) price and rising steadily throughout the day for an eye-catching debut that will surely whet Wall Street's appetite for more music biz IPOs. It closed its first day as a publicly-listed company since 2011 at $30.12 (£23.94), up over 20%.

That gives WMG a market cap of around $15.4 billion (£12.24bn), up by more than $2.5bn (£1.99bn) on the day, a figure surely beyond even Blavatnik’s wildest dreams when his Access Industries company took WMG private in 2011 for $3.3bn (£2.62bn). What’s more, with the initial sale due to cover only 13.7% of shares (although that was increased due to strong demand), Blavatnik remains in total control.

The timing of the IPO looked unfortunate in many ways – it was initially postponed when the coronavirus pandemic hit, while the #BrokenRecord debate and the #TheShowMustBePaused campaign both make the sight of a major record company raking in billions – albeit billions that will ultimately go to its parent company – look a little uncomfortable. It’s probably not a coincidence that Warner and Blavatnik launched a $100m social justice fund on the same day as its IPO.

But, in truth, once it had pressed the button on the IPO, Warner had little choice but to follow through, and it did at least benefit from a stockmarket that continues to defy the global chaos in terms of buoyancy. And, luckily, despite losing that usually-vital last day of priming investors, the float was well-subscribed with institutional anchor buyers that bolster any IPO. Those haven't been published but they include, most intriguingly, according to Music Week sources, Tencent.

Tencent, of course, also shelled out on a 10% stake in Universal Music Group earlier this year – a sort of investment spread-betting approach that’s fairly typical of the Chinese firm’s strategy when moving into a sector. Watching what access and input those two stakes – acquired in notably different ways – give Tencent into the two music companies will be one of the most absorbing things to study in the music biz over the next few months and years.

For now though, while they’ll probably refrain from publicly popping champagne corks just yet, Len Blavatnik, Steve Cooper, Max Lousada and everyone at Warner Music Group should at least allow themselves a quiet smile of satisfaction.

Others watching enviously from the sidelines should also be pleased. Because, despite an unprecedented few months of disruption, this IPO proves beyond any doubt that music remains a hot investment. Warner Wednesday went off without a hitch – and that means the biz can contemplate many happier Mondays to come...

* To read our guide to what music companies’ stock market performance during the coronavirus crisis tells us about the future of the music biz, click here. To make sure you can access Music Week wherever you are, sign up to our digital issue by clicking here.