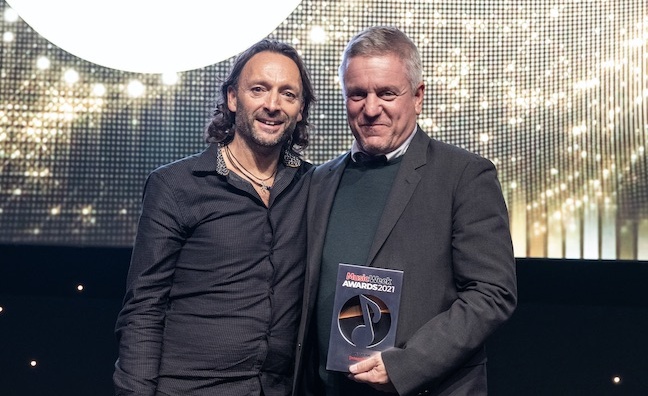 The Music Week Award-winning team at Integral have underlined the importance of physical music in breaking British artists.

Speaking to Music Week after collecting the Sales Team trophy, managing director Jason Rackham (above, right) and sales rep Jason Barton (left) stressed that sales teams play a vital role in the music business ecosystem. The pair played a central role in last year's Love Record Stores initiative, while their company enjoyed successful campaigns with the likes of Idles and Fontaines DC during 2020.

Here's what they had to say backstage on the night of the biggest Music Week Awards in history...

Our relationship with retail is built on trust and longstnding reputations

How does it feel to win?

You had Idles playing as you walked up, is that a campaign you feel really stood out in 2020?

Jason Rackham: “Yes, among others. We’re pretty blessed with getting to work with some really amazing labels and artists on incredible campaigns. The last year, we’ve really seen what our sales team can deliver at retail, it’s been really challenging. But talking directly to a lot of the stores, which Jason does all the time and I have done a lot over the last year, it’s been really amazing to see how they’ve adapted and how we as a team have helped and supported them.

The business has rebranded too, what was the story behind that?

JR: “That was really to create a distinction between our services business and our label group and rights business, to bring a little bit more definition so people understand. It’s gone alright so far, I would say it’s a successful rebrand! [Laughs]."

You were up against some tough competition, what does it mean to come out on top?

JR: “We’ve got loads of friends that work at other companies in sales teams and they’re all part of the family.”

Jason Barton: “Especially last year, with Love Record Stores, we were all in it together.”

What was it like to be involved in something that had tangible benefit at a tough time?

JR: “It was a beautiful thing. It was amazing to see people across the business like Jeff Barratt at Heavenly, Daniel Miller at Mute, Andy Creen, Andy Saunders, the PIAS sales and marketing teams all come together to try and do something to help support small businesses through the pandemic. It gave us something positive to focus on.”

JB: “That was it, to create something really positive. That initial period of lockdown was so negative.”

From speaking to your contacts, how is the retail sector doing now? And how did you support them?

JR: “I think they’re doing good. Our relationship with retail is really built on trust and longstnding reputations. Jason has been working with UK retail for a long time.

JR: “Exactly, so he’s got longstanding and very deep relationships with retail. They trust us, it’s a really healthy thing and we do what we can to support them.”

Finally, how important is it that this cateogry highlights sales teams and what they do?

JR: “If you look at a lot of the new artists that have broken through over the last couple of years, bands like Idles and Fontaines DC, Arlo Parks… Their week one chart positions, which is still a really important part of breaking an artist, were driven by physical. The streaming comes later down the line, but physical is really [key] and sales teams play a really important part in breaking artists still.”