'It's a collective effort': Emily Eavis calls for 50/50 festival bills as Women In Music 2019 bursts into life 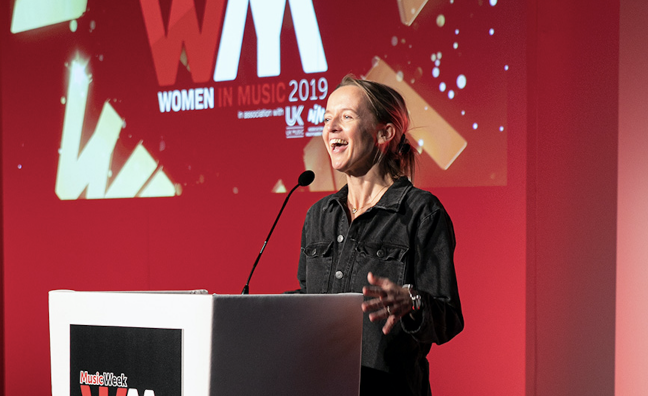 Emily Eavis challenged the live industry to book festival bills with a 50/50 gender split. Freya Ridings spoke out for the “shy little girls who write their own destiny”. Annie Mac remembered a time when she was “one of about three female drum’n’bass DJs”. Zena White was elated after a stellar year for Partisan Records. Kamille appealed for women to “be braver, speak out more, treat ourselves more”.

These moments and countless others made up the Music Week Women In Music Awards 2019, the biggest and best edition of the event yet. Alice Levine returned for the fifth time as host, telling a heaving crowd at The Brewery: “I run a tight ship”.

That brought the afternoon’s first outburst of energy. There would be many more. BBC Radio 1/1Xtra’s Tiffany Calver – a Music Week cover star earlier this year – kicked things off, paying tribute to Clara Amfo, who presented her with the Rising Star Award to cap a brilliant breakthrough year.

An ecstatic Universal Music UK team, Partisan MD Zena White and legendary Sleeper leader Louise Wener sprinkled further stardust as the awards came thick and fast. This year’s Roll Of Honour inductees were out in force too, prompting jubilation in the audience.

By the end, the fug of celebration hung heavier over the room than the dry ice from the smoke machines as the dust settled on the sixth edition of the Women In Music Awards. Here are the best moments of a show that will live long in the memory…

SPLIT DECISION
The din was pretty constant inside The Brewery this year, but it perhaps reached its peak as Glastonbury’s Emily Eavis collected the Outstanding Contribution award. Everyone knows the industry holds Eavis dear (Sony’s Rob Stringer, CAA’s Emma Banks, Annie Mac and Stormzy lit up a passionate tribute video), but her speech underlined the importance of her position.

“We’ve come such a long way, in the ’90s there was really only one other woman in the industry. Our phone was in the kitchen, and we had so many calls all the time, loads and loads of agents, mostly these big, old school men,” Eavis said. “Emma Banks was the only female agent. There was just nobody else. I grew up thinking the industry was one woman and loads and loads of men!”

Eavis said change is coming, but implored the industry to do more. “Even the really grumpy male agents and promoters I work with are acknowledging that we do have to make that change,” she continued. “We’re getting there. Festival line-ups are almost 50/50 but we’re not there yet. The topic is out there and people are really consciously booking these bills and we’re making a difference. It’s not just us, it’s the A&R, radio, TV, everybody getting on board, it’s a collective effort from everyone in this room.”

The biggest Women In Music Awards ever! See you next year ????

BRUM NOTES
Radha Medar picked up her award for Businesswoman Of The Year with a smile on her face, which you can understand, given the pop sensation status of her Top 3 debut album artist Mabel, who the former Atlantic exec has been developing for years. But Medar had a serious message. “I’m just a kid from Birmingham who moved to London many years ago to pursue a career in music and I remember starting out and not really seeing anyone that looked like me or I could relate to, so it’s really nice to stand here and accept this award,” said Medar, who’s also worked with Skepta, Anne-Marie and Mahalia. “Although there’s still not enough women of colour in positions of power in this industry, I really am living proof that things are moving in the right direction.” Her former Atlantic colleague Alec Boateng – fresh from a white-knuckle black cab ride – paid emotional tribute when presenting Medar with the award. “I want to say to Radha that it’s really important to be seen and to be heard, she represents a lot of people,” he said. The ovation she received said it all.

KAM-DO ATTITUDE
Camille ‘Kamille’ Purcell’s table was a consistent source of noise all afternoon, and it was soon clear why when the artist, songwriter and label boss went to collect the Music Creative award. “I don’t know what to say,” she began. That turned out to be a complete lie. Kamille had prepared a speech, she said, but subsequently lost her phone. Recently, a train from London to Sheffield she was on was evacuated due to a potential security threat. It was an incident that made the Little Mix hitmaker consider a few things. “It made me go, ‘I’m not doing enough with my life,’ she said. “I don’t think any of us are realising our potential. As women we could be braver, we could speak out more, we could treat ourselves more.” Kamille said that, “When girls come to the studio and they’ve had a terrible ex break their heart I get so angry. It gives me joy writing break-up songs that turn into money for them.” If that raised the roof, her next line brought the house crumbling down: “To all my women in here, keep thriving, keep surviving, don’t call your ex back and move on with your life!”

Returning to the podium, Alice Levine raised her eyebrows and said: “Someone’s got to follow that, best of luck…”

RIDINGS HIGH
Women In Music’s assembled legends could potentially be intimidating company for those just entering the business. But Freya Ridings has dealt with those feelings of not fitting in before. Her label boss Christian Tattersfield praised her for having “the talent and personality to really do whatever she chooses to do” and when Ridings arrived at the podium to receive the New Artist prize, she rose to the occasion. “This is one of those moments you dream about as a little girl, learning to play guitar for the first time,” she said. “This is for all the shy little girls who are championed by people to write their own destiny. I’m very lucky to be one of them.” Like her songs, it was devastatingly effective.

Congratulations to all the winners @MusicWeek Women in Music awards, espesh @AnnieMac for being brilliant. Not only at music stuff but for rocking a red lip better than any woman I know. Also biggups @Alicelevine for lolsome hosting skills. pic.twitter.com/gY5sxOJNqj

ELECTION FEVER
As one stands down, another steps up. The Campaigner award – as it surely should – brought politics right to the heart of WIM. It was presented by outgoing Labour Party deputy leader Tom Watson, who quit as an MP this week but still showed up to honour winner Olga Fitzroy. “They told me that, if I resigned, I’d never have to make a speech again,” he quipped, but showed he still has that rabble-rousing magic by hailing the producer and #SelfieLeave campaigner as “super Olga”. “When most people face adversity and find the system working against them, they give in,” he said. “Olga turned her personal experience of a discriminatory policy into a national campaign and, by the strength of her character, intelligence and argument, she’s on the verge of winning that campaign for every freelancer in the industry in this country.” Fitzroy – standing as a prospective MP in the election – then showed her own chops as an orator, declaring: “The gender pay gaps in our industry, although improving, are shameful.” She also came up with a plan to change things: “We all need to do more,” she said. “This room is full of powerful and successful people and I urge everyone here, when they go to work next week, to think about what they can do to ensure women have just as much chance of success as men.” Fitzroy certainly gets our vote.

BIG MAC
Annie Mac has become one of the industry’s most important voices, as evidenced by her Music Week cover story earlier this year. And her speech certainly made an impact. Hailed by new BBC pop controller Lorna Clarke as an “amazing talent”, she started her Music Champion acceptance speech by quipping that the tribute video – featuring Sam Fender, Nick Grimshaw and many more – made her feel like “I might have died and that was my obituary”. She talked about the days when she was pretty much the only female DJ working in electronic music and her pride in seeing how much “things have changed since I’ve been doing what I’ve been doing”. But she also warned there are still many more challenges ahead, particularly on festival line-up gender splits. “There’s work to be done pushing women up and giving them the space they need to evolve as artists,” she said. And you can bet that Mac – and everyone inspired by her words at Women In Music – will be doing their fair share of that work. It was that kind of afternoon.