'It's okay to talk about these issues': Jason Iley on tackling mental health in the music industry 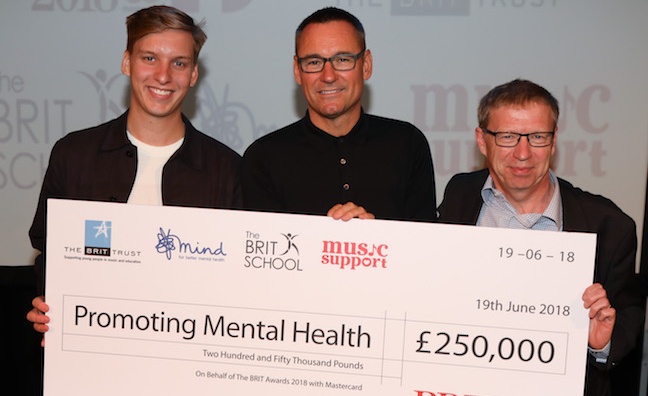 Sony Music UK CEO and chairman Jason Iley joined his chart-topping artist George Ezra and Mind CEO Paul Farmer to back the launch of a mental health campaign at the BRIT School. Iley, who’s also chairman of the BRITs, handed over a cheque for £250,000 that will be shared between charities Mind, Music Support and the BRIT School for programmes to support wellbeing among young people.

Mental health has become a major issue, particularly in the light of tragedies involving Avicii and Frightened Rabbit singer Scott Hutchison, while artists including James Arthur have spoken about the stigma. Sony Music recently implemented measures to help staff cope with the pressures of the industry.

“I’ve been working in the music business for 25 years and over that period of time I’ve had numerous executives come into my office and say ‘I suffer from this’,” said Iley at the launch event. Here, Iley speaks to Music Week about the measures being supported by the BRITs funding and Sony Music’s own programme for staff and artists…

How important is it to address mental health issues for the industry as a whole?

It’s about creating a voice, creating a noise. Looking at it from a Sony perspective, it’s something the whole company has embraced. We had our mental health and music day, which over 300 people turned up to. From a charity point of view, we’ve had people [raising money] by running marathons and jumping out of aeroplanes. Sony Music has given every staff member two extra ‘premium’ days per year for people to go and spend time on themselves. When you’re working in the music industry 24/7, you’re not having breaks at the weekend, you’re going to shows, you have to realise that staff need some time. So we’re very keen on supporting our staff, supporting our artists.

You acknowledged the case of former pupil Amy Winehouse in your comments at the BRIT School event. Do tragic cases like that suggest that these issues should have been addressed earlier?

In the past, one was aware of it but didn’t discuss mental health issues. Now, it’s just a realisation that it’s okay to talk about these issues and realise that it’s prevalent within our companies – you can’t just sweep it under the carpet. You’ve got to be open and respect that people have issues. I know Matt Thomas [record label veteran who founded Music Support] from 25 years ago, and [the industry problem] existed then, it unfortunately exists now and it will exist in the future. But if we don’t actually start to do something about it, there’s a problem.

How do you address mental health issues with your artists?

We work closely with management. Even from an artist perspective, artists feel it’s okay to talk about issues whereas before they didn’t. It’s just more of an open environment. In the modern world, people are prepared to talk about an issue and not hide from it. If our staff are supported, they can also appreciate and understand what an artist is going through, which in turn helps them. If we were asking them to do 25 things, we might take a step back and go, hang on a second we shouldn’t be putting too much pressure on our artists.