Jax Jones on his label launch, mentoring new talent and the next phase of his hitmaking career 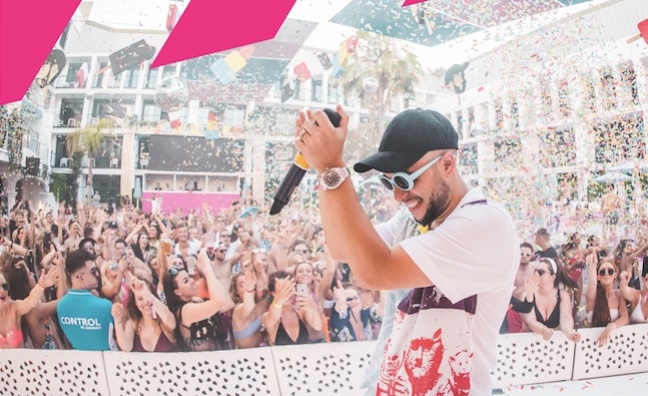 Jax Jones is set for a big weekend.

As well as performing at the final of the cricket contest The Hundred, which is screened live on BBC Two on Saturday (August 21), he’s set for another hit single. Out Out by Joel Corry & Jax Jones feat. Charli XCX & Saweetie (Perfect Havoc/Atlantic) is chasing a Top 20 entry on the singles chart.

Music Week recently revealed the launch of WUGD, Jax Jones’ new label in partnership with manager Dan Stacey and Polydor. Here, the UK hitmaker opens up about his ambitions for the new venture.

“You could consider us to be an independently-minded label, but with the global infrastructure of a major label,” said Jax Jones (real name Timucin Lam). “So it's approaching things with the duty of care that you'd find in a small label where it’s a family-like structure, you're able to speak to people and you're as creatively involved with an artist as they would want you to be.”

The label launch is informed by Jones’ industry experience, including a long run of hits and a 2019 Top 10 debut album, Snacks (Polydor), which has 283,483 sales to date (Official Charts Company). The innovative streaming-focused release developed as an EP and was ultimately given a physical release as more tracks were added.

Ironically, Jones was once part of a band that was dropped by Atlantic - the label behind his current hit. The Jax Jones artist concept was created several years ago by Timucin Lam with his manager Dan Stacey at Loving Alliance, following various music projects.

“It was the germination of an idea and then we built it from scratch over seven years,” said Jones. “I've gone from being a session musician to being in bands that have made albums and got dropped, to then being an artist in my own right.

“I've written songs for other people, I have produced for people. I've seen all walks of life within this industry, I even dabbled in management. So with all that experience comes a very artist-friendly, healthy creative environment where it's about investing in an idea, because that's how it starts.”

“Yes, we like a bit of data and if they’ve got a nice little social following, great,” he said. “But I'm still a believer that, if the music is great, then it's going to [connect]. Because we make music, we know what we're listening for.

“The thing that I am very passionate about - and which I think is perhaps being extinguished now with the TikTok generation - is investing in an artist and in creativity, and then harnessing that and allowing it to blossom rather than manipulating it for other purposes, like the bottom line. So we're all about protecting an artist's vision and integrity, and we see ourselves as people who will enhance that vision rather than change it to something else. Then we run it through the major label system, which has the ability to explode a record on a global scale because of all the infrastructure. So you get the best of both worlds.”

“Commercial dance music can be so data-driven and driven by the quick buck, but there is a lot of great dance music that perhaps isn't getting celebrated on the world’s commercial stage,” he said. “If we think about all the great acts there have been over the years, I don't think you can find another Daft Punk if you don't take the leap. We’re definitely keen to sign things that come from an authentic place of integrity and are less about a gimmick.”

Mentorship is central to the WUGD ethos.

“The reason I can talk so passionately about all of this stuff is because this shit is the T-shirt I wear, it’s based on life experiences,” said Jax Jones. “In terms of mentorship, I come from a broken home with not very many positive role models. But I've just been very lucky I’ve had these guardian angels that jump in and give me a leg-up, whether it’s advice or resources.

“We just want to create that environment for people who have raw talent and offer them bursaries or mentorship, like being able to have face-to-face time with Jax Jones. We also see that as a way of pooling talent to uplift through the label. So it's something very special.”

Jones stressed that it’s “essential” that he maintains his role as a hitmaker alongside running the label.

“My job is to provide the figurehead aspect and then work at a very A&R, musical level,” he said. “But that's what I do day in and day out, this is my passion.”

Jax Jones will release his own songs via the WUGD imprint as well as via Polydor.

Feels, the debut WUGD release earlier this summer, is the official song of the new 100-ball cricket competition, The Hundred. It features on Jax Jones’ Deep Joy EP.

“It’s the start of a new era for Jax Jones, which I'm calling Deep Joy,” he said. “Snacks was one anthology within the Jax Jones world, Deep Joy is the next one. It’s the idea that we, collectively as a society, have gone through a pandemic and come out the other end and had to dig deep to experience our joy.

“I've had so many personal challenges over the last year, figuring out my demons whilst becoming a father, and just trying to navigate that transition. Happiness tends to be something external, and maybe a new place or a new person you meet brings you happiness, whereas with joy you have to work hard for that.”

“I want to make music that sounds like how you fight for joy,” he added. “It's my nostalgic take on older dance music updated for now, and it's all with this club focus but poppy aesthetic. It’s still going to be about having big records and I still want to have successful music, but it's just having that narrative to it.”