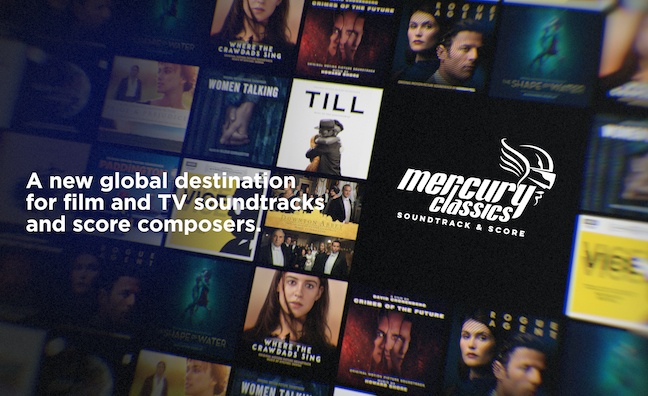 The new boutique record label is dedicated to the art of soundtrack & score across film and TV. It will support score composers and artists as they undertake major audio-visual projects globally.

Lana Thompson has been newly appointed as label manager.

The first major releases to be announced through Mercury Classics Soundtrack & Score are Till (Orion Pictures), composed by BAFTA-winning Abel Korzeniowski, and Women Talking (Orion Pictures), the score by Oscar, BAFTA and Grammy-winning composer Hildur Gudnadóttir.

These will be followed in 2023 by the soundtrack to A Good Person (MGM), written and directed by Zach Braff and starring Morgan Freeman and Florence Pugh, with a score composed by Bryce Dessner.

From 2015-2021, a consecutive run of seven Oscar, BAFTA and Grammy-winning scores were released or distributed by a UMG label or composed by a UMG artist. Among those, Decca was responsible for The Hateful Eight by Ennio Morricone and The Shape Of Water by Alexandre Desplat, while VLG artist Jon Batiste was behind the score to Disney/Pixar movie Soul (composed alongside Trent Reznor and Atticus Ross). Elsewhere, Decca’s Ludovico Einaudi provided the music for Oscar-winning films Nomadland and The Father.

In recent years, acclaimed scores have been released across Decca, Verve Label Group and Globe. Now all three partners are coming together to create a unified central hub.

“With new hubs in LA, NY and London, backed by UMG’s global reach, Mercury Classics Soundtrack & Score is focused on delivering unique and creative campaigns for these works,” said a statement. “The new label will also enhance the profile and reach of the composers behind them and release soundtracks that appeal to the dedicated and loyal fans and collectors of the beloved genre.”

Dickon Stainer, president and CEO of Global Classics & Jazz and Verve Label Group, said: “The launch of Mercury Classics Soundtrack & Score reinforces Universal Music Group’s status as the world’s most soundtrack-friendly music company. A succession of Academy Award-winners for original score have either been distributed by a UMG label or composed by a UMG artist – from Ennio Morricone’s The Hateful Eight to Hildur Gudnadóttir’s The Joker. This exciting new international label venture will enable us to reach ever-wider audiences, and deepen our support for today’s leading score composers and performers.”

Laura Monks and Tom Lewis, co-presidents of Decca Records Group, said: “Decca has always been at the forefront of championing the composer artist, which is reflected in its remarkable record of success with world-class soundtracks. Combined with our global colleagues and with this new label, our work across award-winning soundtracks will be rightly amplified. We feel the emotion and storytelling that comes from great soundtracks deserves its own dedicated focus and Mercury Classics Soundtrack & Score will serve to do that.”

Marc Robinson, president of Globe and co-president, Mercury Studios, added: “As we continue to be at the growing intersection of music and film making, Mercury Classics Soundtrack & Score is an exciting opportunity for filmmakers, composers, and musicians alike. We all know the powerful role music takes in the audio-visual space, and by working early on with creators we are now best placed to help bring their musical aspirations to life, with some of the best musical artists and collaborators. With the upcoming releases of Women Talking and A Good Person, Mercury Classics Soundtrack & Score will lead the charge as the home to the most exciting and diverse soundtracks and scores.”

Having launched in 2017, Globe Soundtrack & Score has been behind 19 soundtracks, ranging from the Jessie Buckley-led Wild Rose to Idris Elba’s directorial debut Yardie, as well Amelia Warner’s score for Mary Shelley and The Phantom of the Open by Isobel Waller-Bridge.