Music champions: The 6 best moments from the Women In Music Awards 2017 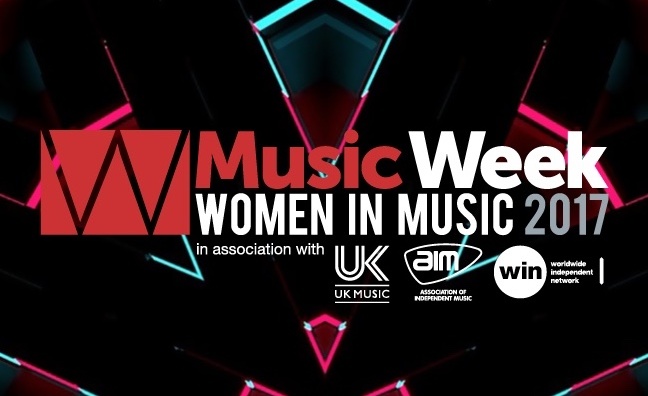 “I had loads of jokes prepared but I’m just not going to bother after that. Every speech is just so powerful and fantastic!"

So said Alice Levine, BBC Radio 1 DJ and, for the third consecutive year, host of the Music Week Women In Music Awards. Levine was speaking after an emotional acceptance speech from Ray Blk, winner of the New Artist Award.

But the presenter could have been talking about any of the nine winners’ speeches. Passion, fight, diversity and emotion were the themes of the day, on an afternoon that celebrated the achievements of a game changing group of executives, including the 2017 Roll Of Honour. From Proper Music Group’s Kameil Sattar and Urban Development founder Pamela McCormick, to Sas Metcalfe and Grace Ladoja, each winner took turns to silence the room with powerful words. Here are the six best moments of the Women In Music Awards 2017…

The only Ray is up

After Grace Ladoja, who manages Skepta through Metallic Inc, won the Rising Star Award and Sattar picked up Proper’s trophy for Diversity In The Workplace, Ray Blk was welcomed to the stage by MOBOs founder Kanya King. King, who won Media Pioneer at last year’s ceremony, described Blk as “a fantastic example of DIY culture”. The Catford singer proved a master of public speaking too, despite confessing to “weird” nerves. Blk talked about this as “a feminist event… about equality of the sexes”. Discussing the path to diversity in the music business, she then called for “women in music to support each other, this is about women supporting women”. Raucous cheers threatened to swallow her words throughout, reaching a crescendo with the line: “Young women can chase their dreams and be a boss without fear of being called a bitch.”

“I’m the daughter of two people who arrived in this country with 50 quid between them, and I’m still not sure my mum understands what I do!” The whooping continued throughout Clara Amfo’s speech, which could start after a warm embrace from Magic FM’s Angie Greaves, who said, “Clara is warm, loving and friendly, this award had to be hers.” She was referring to the inaugural Music Champion trophy, and Amfo’s winner’s video – packed with stars including Justin Bieber, Miley Cyrus, Jay-Z and Pink – showed precisely what makes her such a special broadcaster. Disarming pop stars in the Live Lounge and coaxing revelatory answers from usually tight-lipped megastars are clearly second nature to a DJ who is a true music champion.

We can’t say we weren’t warned. BMG’s Alexi Cory-Smith, speaking on video, pre-empted Sharleen Spiteri’s torrent of expletives during her Inspirational Artist acceptance speech. Reacting to the film, which also saw Sir Paul McCartney and French football hero Thierry Henry waxing lyrical about the Texas singer, Spiteri simply said, “Well, fucking hell! I need to take that video on the train so I can have a big boost for my ego!”. Spiteri also asked a question you get the feeling many in the room also had on their lips: “Why the fuck are we still having to fight so hard?” Then came another zinger to unite everyone in the room: “I thought every woman getting an award wasn’t getting it because she was a woman, she was getting it because she’s fucking amazing!” Never mind inspirational, this was a call to arms, a spotlight on the brilliant achievements of everyone in the room this afternoon and beyond. “I hope I inspire my daughter, that’s the most important thing,” Spiteri finished.

It was the line that drew some of the biggest cheers of the afternoon. In a fizzing homage to Decca president Rebecca Allen, Imelda May reached the end of yet another adoring point and said, “Yeah… David Joseph, watch out for your job!” And after a touching film and an address from Allen herself, you could forgive the Universal Music UK chairman and CEO – who cheering along with the rest of the room – for looking over his shoulder. Allen said the artists form the most important part of her job, before praising the progressive environment at Universal that has allowed her to flourish as both an executive and a mother. For good measure, her two daughters stole the show in her tribute video, proposing to take over Decca and make Little Mix their first signing. Watch this space…

An intro from Tom Watson. Heartfelt messages of appreciation from Gordon Brown, Nigel Adams and Peter Mandleson (who delivered a sharp put down that will have had Piers Morgan’s ears burning). Jo Dipple’s highlights reel was like an episode of Question Time crossed with Top Of The Pops. There was former UK Music star Dipple, who recently started work at Live Nation, with Alex Turner, Dizzee Rascal, Noel Gallagher. It seems her career had to be seen in review to truly be believed. Only Boris Johnson’s appearance elicited the odd boo. Once the din had died down, Dipple could begin a speech that ended with the declaration that, on the day when music can call itself a truly equal and diverse industry, she’d be there to party, with her “card behind the bar”. As closing speeches go, this will take some beating…

“I think if people at Radio 1 made a video about me they’d be like, ‘Ummmm, think of something nice… hmmm… She was really good at recycling… Er… She bought me a coffee once?” Self-deprecating to the last, Alice Levine popped up between each award to ensure impact was sandwiched with levity. “Some of the people in these videos, you’d think they didn’t know we’d be filming them, did you see the laundry in the background? Unbelievable.” By taking the mickey out of herself, the ceremony and then herself some more, Levine cleverly added extra emphasis to the both the music biz stars and the industry issues at the heart of the Women In Music Awards. “Leave the room as if there was a fire alarm going off,” she urged at the end, as ushers set about chivvying guests towards the afterparty. “See you next year!”