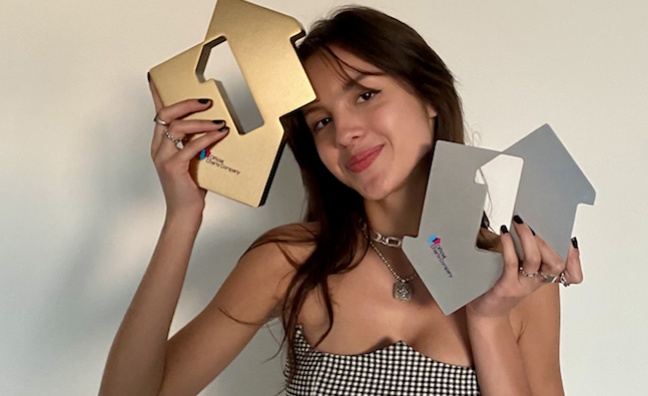 In the first quarter of 2021, Olivia Rodrigo was riding high with Drivers License (Geffen/Polydor), the biggest seller of the first three months of the year after nine weeks at No.1.

As we reach the halfway point, Olivia Rodrigo is now dominant in both albums and singles sales, according to data from the Official Charts Company. Debut album Sour has spent three weeks at No.1 and a further three weeks at No.2 - it is only the second LP in the last year to have two separate spells at the summit.

The US singer’s impressive sales performance means that Sour is the biggest album of the year to date (169,629 sales).

Here, Music Week picks out further highlights from the first six months in our analysis…

Do you remember the first time?

Debut albums from UK acts made an impact in Q1, with new releases from Celeste, Central Cee and Arlo Parks finishing inside the Top 100 for the quarter. After six months, streaming star Central Cee now has the biggest UK debut released in 2021. Wild West, released in partnership with ADA, has racked up 63,140 sales to end up at No.24. Celeste’s Not Your Muse (Polydor) is now at No.33 (57,299), followed by Arlo Park’s Collapsed In Sunbeams (Transgressive/PIAS) at No.82 (37,026 sales).

Further down, The Snuts’ No.1 debut album WL (Parlophone) finishes at No.113 overall for the first six months (30,895). The band’s LP was the biggest UK breakthrough released in Q2 and finished the quarter at No.32. Like The Snuts, Easy Life first made the albums chart with a 2020 mixtape. Their official LP debut, Life’s A Beach (Island), finished Q2 at No.62 (21,287) but narrowly missed the Top 200 for the first half of the year.

After the first six months, the biggest UK album released in 2021 is Life By Misadventure (Columbia) by former Music Week cover star Rag’N’Bone Man. Rory Graham’s second album is at No.11 overall and has accumulated 89,862 sales, although its strong performance is some way off his 2017 debut, Human, which is on 1,281,553 (117,000 of those in its opening week). But in fairness to Graham and his team, no one sells 100,000 in week one any more as streaming has become the dominant consumption model.

In the final week of Q2, Ed Sheeran debuted at the singles summit with Bad Habits (Asylum/Atlantic), with an impressive opening sales total of 92,087. While one week is not enough for the single to make the Top 100 for the half-year, its influence was felt elsewhere as Sheeran’s catalogue streams increased by 25% week-on-week. That helped to ensure that Sheeran’s Divide album finished the first six months of the year at No.10 overall, with sales of 95,098 (for the record, its total sale is now 3,713,899).

According to the OCC, dance-pop tracks make up around a quarter of the Top 40 for the year to date. Dutch DJ Tiesto has the UK’s third biggest song with The Business (Atlantic) on 640,002. Friday (Ministry Of Sound) by Riton, Nightcrawlers, Mufasa and Hypeman is at No.7 (628,988).

Q1’s victor Dua Lipa finishes at No.2 for the first six months with Future Nostalgia (Warner Records) on 143,485 sales. Fifteen months after its release, the album is still going strong and has 408,527 sales to date. A combination of hit singles (Levitating and We’re Good), plus a deluxe Moonlight Edition of the record, have boosted its sales this year. Future Nostalgia has held a spot in the Top 10 every week since the last week of February.

Harry Styles’ Fine Line (Columbia) continues to enjoy success 18 months on from its release, and it is currently the UK’s third biggest album of the year (109,010). Queen’s Greatest Hits (EMI) ranks fourth (105,880 sales) as the band celebrate their 50th anniversary - and that’s not including sales this week, as the 40th anniversary edition of the collection is in the running for No.1.

Subscribers can click here to read our Q1 analysis.