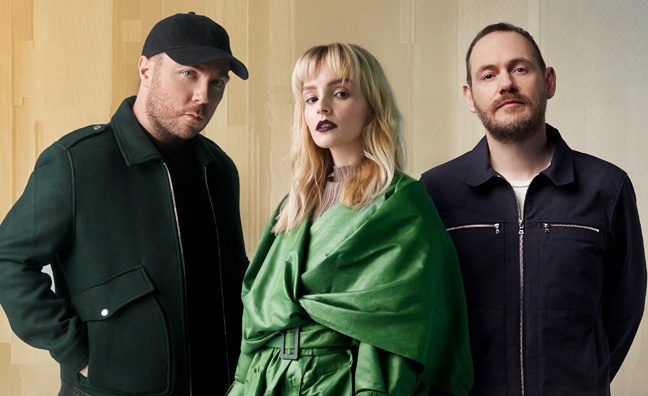 The team working on Chvrches’ new record Screen Violence have told Music Week that it marks a turning point for the band, both in sound and the way they’ll make albums in the future.

“It’s a defining album, for a defining moment in all our lives,” said EMI Records president Rebecca Allen. “As the team sat in our houses in different parts of the world, this music seeped into our homes. We began to bedroom dance, hands in the air, with huge smiles on our faces, knowing that what we were listening to was musical excellence. It was euphoric!”

Allen added: “We all left that Zoom call knowing that the band had created something so brilliant, it felt hugely exciting and hugely motivating. Chvrches are a band that continue to push the boundaries of music, creativity and conversation.”

And it was fitting that team Chvrches experienced their new music over video call given bandmates Lauren Mayberry, Iain Cook and Martin Doherty made the record remotely during the early stages of the coronavirus pandemic.

“We were really fortunate in so far as the guys in the band are amazing producers and incredibly tech savvy,” said Campbell McNeil, who co-manages the group with Danny Rogers as part of Lunatic Entertainment. “They very quickly got on top of the communication. We were really lucky that they had five weeks before shutdown, they had the direction and had starts on a bunch of songs. In a weird way, Covid was kind of a blessing, it made them communicate better than they ever had.”

McNeil said that the team maintained a hands-off approach during recording.

“We didn’t have to get that involved,” he said. “Iain and Dok [Doherty]’s technical ability is mind-blowing. They just told us what they needed, we got it for them as much as we could. They were beta testing software, coming up with ideas that were phenomenal. How communicative those two studios, the studio in Glasgow and the studio in Los Angeles, were was just incredible. I often wonder if they’ll go back to work in any other way. Putting people in a heated environment of, like, OK, you’re in the studio, you’re there for three months or six months, you’re all together and you’ve just been on the road for a year…’ – maybe that’s not the best way to make records.”

Glassnote boss Daniel Glass heads up Chvrches’ US label, and compared the band to Blondie and Depeche Mode.

“Before this album, I think we had great songs, great singles,” he said. “And maybe not everything was at the level of certain things. There’s a theme and meaning behind the album, and I think that’s why it’s their best, because it’s a real album. It’ll be this record that makes them vital.”

“I remember back in 1983, asking my bosses, ‘How is Blondie this big?’” he continued. “They were an arena rock band but all over punk radio. Depeche Mode is another example. Here you’ve got a band that will get bigger because they’ll get more popular. People will follow them and make records like them. I believe they will define what becomes popular. [The key with] the album is to continue to release music. I believe by not forcing it, it will become pop.”

Glass expanded further on what he feels is a new era for the group.

“I feel a new power, a new energy, a new focus with the band,” he said. “When I joined the record business at Chrysalis in ’83, you were taught the third and fourth albums were the career moments which amalgamated or synthesised the development of the artists. They just feel like they became a band. It’s the best work they’ve ever done.”