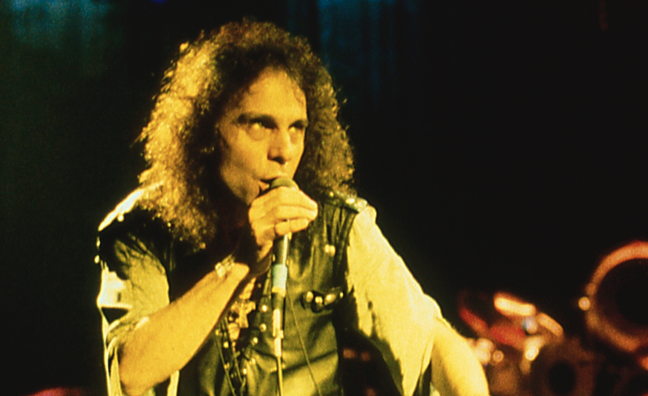 BMG has confirmed details of its next feature-length film project: the first-ever, career-spanning documentary on the life and times of the late Ronnie James Dio.

An official press release stated that is “the first documentary about Dio to be fully authorized by the artist’s estate.”

The as-yet-untitled film – which is currently in production – will incorporate never-before-seen archival footage and photos from Dio’s personal archives.

The press release continued: “The film will offer intimate scenes with his closest peers, friends and family as they bring us inside the life of one of rock and roll’s true heroes.”

BMG is both financier and executive producer of the film, with all rights available worldwide.

Speaking about the project, Wendy Dio, said: “I am very excited to be working with BMG on Ronnie's long-awaited documentary. Ronnie loved his fans and I hope they will enjoy this trip through Ronnie's life.”

Kathy Rivkin Daum, executive producer, BMG, added: “We are incredibly fortunate to have the opportunity to partner with artists to tell their stories on the big screen. Dio, a larger than life rock hero, whose music means so much to millions of fans worldwide, deserves nothing less. The story behind his passion, ambition, and the highs and lows of success, in the rock and metal worlds, is something audiences have never seen before and won’t soon forget. We are honored to partner with Wendy on this incredible journey celebrating Ronnie’s life and work.”

The upcoming documentary is the latest project in BMG’s line of music-related films and television projects, which have included David Crosby: Remember My Name, the Joan Jett documentary Bad Reputation, The Show’s The Thing (about the early days of the live music business), Rudeboy: The Story of Trojan Records, and Echo In The Canyon.

BMG formally announced the strategic move of the integrated record label and music publishing company into music-related films and TV production in late-2017.

In other news, BMG will release a newly remastered collection of Dio’s 1996 – 2004 studio albums Angry Machines, Magica, Killing The Dragon, and Master Of The Moon on March 20, 2020.