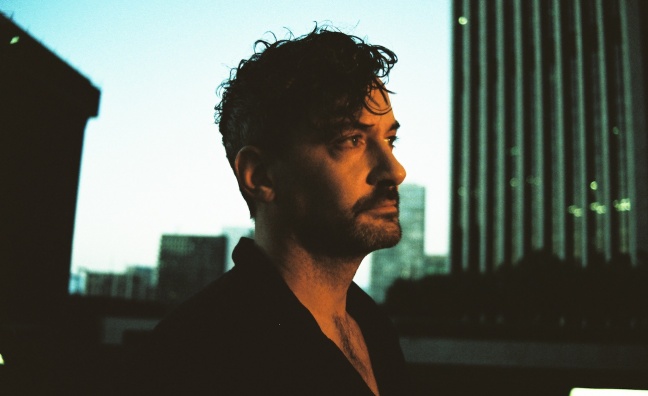 With sales of 7,782 copies, Bonobo's Fragments debuted at No.5 in the albums chart last week, matching the peak of its predecessor Migrations in 2017. Ninja Tune's head of marketing Samantha Sissons has told Music Week that this is just the beginning for the album.

Real name Simon Green, Bonobo has released seven studio albums, and has been working with the London-based indie since 2000. Now, he's firmly established as one of its biggest success stories, and Sissons says that the DJ and producer's upcoming live shows this year will raise his profile even further. The act has more than four million monthly Spotify listeners, with 1,879 of Fragments week one sales coming from streams.

Ninja Tune enjoyed success with Black Country, New Road's debut album last year, and is due to release the group's second full-length in a year next week. In a new interview with Music Week, Sissons looks ahead to the Bonobo campaign and reflects on the label's recent success.

What is driving the campaign for Bonobo's new album? You got a No.5 last in 2017, was the goal this time?
"Nothing fancy really, just a fantastic album and a very motivated and skilled global team. We’ve seen some amazing support from DSPs, which is always something we invest a lot of energy and resources in, and Bonobo’s fans new and old have responded really well to the pre-order. We’ve broken new ground with some international radio and the timely announcement of Bonobo’s latest Grammy nominations provided a nice fillip to a strong reaction at promo. It feels like people have found the story of how his usual creative process was torn asunder by the pandemic really interesting. As ever with a Bonobo campaign, there’s a palpable sense of a real second movement to come once his tour gets going, which again promises to be one of the shows of the year."

There's a sense of freedom and positivity to the record, is this what people need at the moment?
"It feels more and more futile tying any particular statement to a given moment in time right now. Third, fourth, fifth waves, boosters, variants, controversies and cancellations... The story of the last few years switches so quickly it’s hard to harness any one moment or swell of opinion. If people find the album freeing or positive that’s wonderful, no doubt there will be myriad relationships forged with the record and watching those unfold is always one of the thrills of working with art - letting it go to then hear people tell us what it is to them."

What are some of the key points you're building around?
"One of the things we’ve done differently this time is change the single strategy and build in more singles. We wanted to have lots of injections of excitement peppered throughout rather than follow the conventional roll out of releasing one song, then taking it to promo and working it at radio before moving on, so we released five pre-release singles. Our second single, Tides (feat. Jamila Woods), came in quick succession two weeks after the album announce and our intro single Rosewood. We wanted a strong one, two punch to start and it worked really well and created a lot of momentum. Like we did with Migration, we also really wanted to build a visual universe around the record, so we decided not to be precious with the visuals and we revealed 12 stunning images by Neil Krug who did the artwork for Fragments as part of the teaser campaign. A week or so ahead of the album announcement, we put the images on 12 billboards in 12 different countries around the world with the unannounced track titles and also on the Bonobo website and socials. On the website fans could also find a hidden clip of the first single and a secret 12” white label, which sold out immediately. It helped create a nice buzz ahead of the announce and set the tone nicely. Of course, another key element we always look at for Bonobo is his live plot and where that stands in relation to the album and he’s got a great live plot lined up for this year which we are building phase two around."

Where is Bonobo's audience and how are you growing it?
"One of the reasons why it's such a joy working with him is his sound evolves such that he seems to replenish his fans almost naturally by virtue of the natural journey his sound takes. All his records sound fresh and contemporary yet retain a richness and vintage that see them endure long beyond release. Beyond that, it’s finding a tone that feels appropriate for the new platforms and endless ways to consume music nowadays. As a company, we embraced the digital era early so we’re well positioned to capitalise on an album like this which has potential to reach fans in those areas."

The label enjoyed some albums chart success last year, what are you doing differently to the competition?
"The same as always really - just working good records we believe in as hard as we can in every direction the industry stretches. It’s incredibly gratifying to find ourselves and so many of our indie peers in a position to trouble the top of the charts so regularly, it’s a real triumph for the sector."