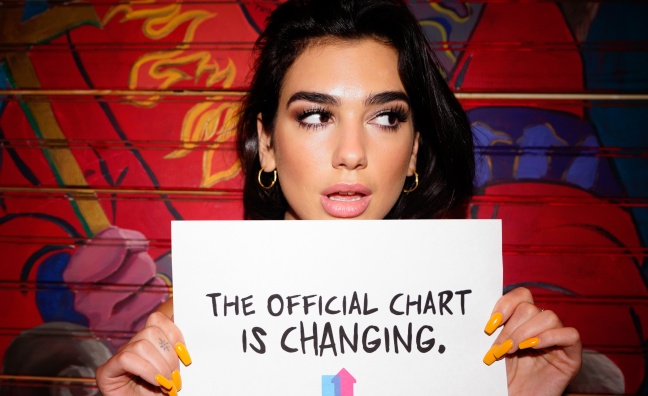 The Official Singles Chart is changing again, Music Week can reveal. Starting from Friday, video consumption will be included in the chart, while subscription and ad-funded streams will now be weighted at different rates.

The chart dated July 6 will be the first to include streams and downloads of official music videos, from services such as YouTube, Apple Music, Spotify and Tidal. The latter three services have added video streaming in recent months. YouTube, meanwhile, launched its long-awaited audio/video subscription service in the UK last week. Unofficial or user-generated content featuring music will not count towards the chart.

In the other big move, The Official Charts Company will change its sales:streams ratio for subscription and ad-funded streams. Until now, both have counted towards the chart at the rate of one sale equalling 150 streams, but from the July 6 chart, the premium rate will be 1:100, while the free rate will rise to 1:600. Video streams will count towards the chart at the same rates.

The OCC stressed that the new moves have been approved after lengthy consultation with all areas of the industry. It follows several European charts eliminating ad-funded streams from their charts altogether, while the US chart recently downgraded them against premium streams. The moves have also been backed by artists, including Dua Lipa (pictured).

“This is a significant step for the UK and ensures The Official Chart continues to be the most comprehensive and trusted chart in the UK, bar none,” said Official Charts Company chief executive Martin Talbot of the video changes. “In the modern era, artists are increasingly multi-faceted creators, with a highly developed visual sense running in parallel with their music. The addition of video ensures that the Official Singles Chart reflects the creativity of the artist in the broadest way possible – and music fans’ engagement with that vision.”

OCC non-executive chairman and Warner Music UK SVP, commercial, Derek Allen added: “It’s always been important that the Official Charts keep pace with an ever-evolving and dynamic market, while also retaining their integrity, something which has set the UK charts apart from many of those operating elsewhere around the world. These latest changes are just another step down that road.”

It’s the second major chart revamp in the last 12 months, following June 2017’s introduction of a cap on the number of tracks by a lead artist allowed in the chart and an increased sales:streams rate for tracks in long-term decline. Music Week research showed the move had successfully produced more hits and sped up the chart, with the OCC hoping today’s moves will have a similar effect and help further boost new music breakthroughs.

The changes will not affect the Albums Chart. The OCC will also be producing a new Official Video Streaming Chart from now on.

The full story of the chart revamp, including exclusive interviews with Talbot and Allen, plus reaction from across the industry, is only in this week’s new issue of Music Week. Don’t miss your copy, on sale Monday June 25.

The Official Singles and Albums Charts are published every week in Music Week, along with a host of other listings and Alan Jones’ legendary charts analysis. To subscribe, click here.