Parlophone's Ben Skerritt on The Snuts' bid for No.1 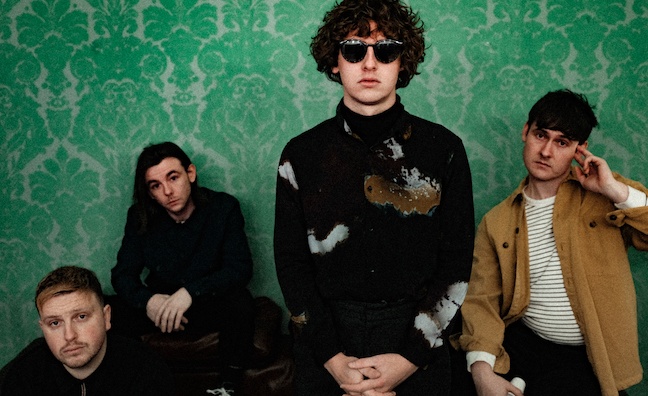 The Snuts are in the running for a No.1 album with their debut WL (Parlophone).

The band are currently battling Demi Lovato in the chart race. So far, The Snuts are ahead (by 1,117 at the end of Monday) and are racking up the most vinyl sales and downloads so far, according to the Official Charts Company.

Should The Snuts hold onto their lead, WL will become the first debut album by a Scottish band to top the Official Albums Chart in 14 years. The View were the last to do so in January 2007 with Hats Off to the Buskers.

Here, Ben Skerritt, Parlophone senior marketing manager, opens up about the chart battle and the rise of The Snuts…

What are the hopes for the album in week one and beyond?

“We’ve got big ambitions for WL and The Snuts. It’s a defining moment in their career that celebrates everything that has made them the band they are today, while also showcasing the huge future that they have as an iconic British act. We want this album cycle to take them beyond the die-hard audience we have built and into mainstream consciousness. With new playlist additions on BBC Radio 1 and Bauer’s Hits Radio Network in Scotland for current single Somebody Loves You, incredible press and online campaigns and a fast-growing online movement across socials, this is starting to happen already. We’ll be building on this with some exciting marketing and promo moments celebrating the band’s Scottish heritage and giving back to the fans. A solid week one chart position will be a wonderful way to kick start nine months of promoting this record through a massive headline tour in Q4, additional single campaigns, iconic videos and much more.”

How did the livestreams help set up the album launch?

“Building a campaign during a global pandemic for an act who have built their core fanbase predominantly through dedicated touring and live shows has been a challenge, but one thing that was always clear was that we needed to create some sort of live moment around the album launch. It allowed us a moment to create some stunning visual content and bring friends, family, fans and media together, even if it couldn't be in the flesh. It was also essential to make the event feel unique so a castle in Glasgow felt like a fitting choice! Ticket sales were fantastic and the noise around the show throughout the fanbase was phenomenal! A huge success overall.”

Parlophone has been working with the band for a few years, has it been a long-term development process?

“Definitely! We signed the band just after they launched their debut EP in 2018 and have been grafting with them ever since. The band's sound and visual identity have developed hugely during that time but the ambition to be one of the UK's most exciting bands has never wavered. The band have gone from a few hundred tickets in Scotland, to tens of thousands of tickets and potential album sales throughout the UK and Europe.”

It’s hard to break artists in the streaming era, especially guitar bands, how have you done it with The Snuts?

“Hard graft, ingenuity and an honest commitment of gratitude to the fans that have joined us along the way. There are two parts to every campaign: growing an audience and then ensuring that the audience you have feel proud to be fans, want to invest in everything you do and spread the word. Giving back to the fans and making them feel a part of the journey has been at the heart of everything we have done throughout the past three years. Giving them something to feel proud of and a reason to keep supporting you. We’ve always tried to ensure that the fans feel as much a part of The Snuts as the band themselves.”

How are the band doing on streaming?

“The band are doing well. We’ve seen great support for the band from all DSPs and they have close to 40 million streams to their name now. We’re seeing growing support internationally too which we are hoping will continue beyond album release.”

The band posted on Twitter about the delay for the album cause by Brexit and Covid. What have the challenges been for a new band like the snuts over past year?

“What challenges haven't there been?! This has been a tough year for every artist and everyone in the industry; on a business level, a day-to-day level and on a personal level. Moving the album date was a small and necessary logistical adjustment and we turned this into an advantage by developing a much broader plan that has, ultimately, put us in a fantastic position with the band going into the new April 2 release date.”

How will live help momentum for this campaign – what are the live plans?

“Take a listen to the album. Tell me you don't want to hear that entire record played top to bottom with a beer (or lemonade) in hand at a festival or singing your heart out at a gig venue. This band's creative foundation is in live music so to get this album out on the road is merely showcasing it in the place it's really meant to be heard. There's a sold-out headline tour at the end of the year including three Barrowland Ballrooms and Kentish Town Forum in London, and they are certainly going to be among the highlight moments of the live circuit this side of 2022.There are also a number of intimate, stripped-back shows we have organised with the incredible indie-retail community who have always been so supportive of the band. They’ll be showcasing the record in more intimate settings with a stripped-back, strings arrangement that is going to be pretty special too!”