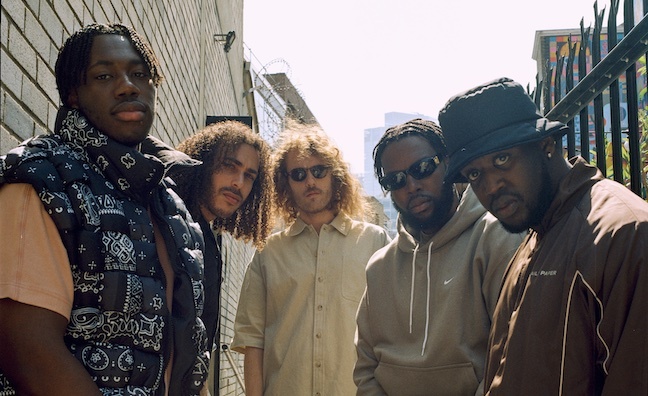 Ezra Collective are pushing for a UK Top 10 entry with their new album, Where I’m Meant To Be, according to Midweek sales.

Featuring guest stars Sampa The Great, Kojey Radical, Emeli Sande and Nao, it is the London jazz stars’ first album for independent label Partisan following a decade on their own Enter The Jungle DIY venture.

Ezra Collective and their team are interviewed in the latest issue of Music Week to mark the release of the LP.

Partisan has recently secured No.1 albums for Idles and Fontaines DC, and the label is now helping to take Ezra Collective to a wider audience. The group themselves were confident about their chart prospects when speaking to Music Week back in 2019.

“Ezra Collective are the perfect midpoint between Idles and their celebratory, inclusive community, empowering messages and live energy, and then at the other end of the spectrum, we work the entire Fela Kuti catalogue,” said Jeff Bell, GM, international. “Partisan has always been about finding unique artists with unique voices that have something to say. A lot of the bands on the roster happen to use guitars to do that, but when you look at the spectrum of artists, it fits pretty squarely on. Whenever we are working with an artist in a lane that we haven’t before, it’s an opportunity to apply everything we’ve learned from our other acts.”

Ezra Collective are now pushing for what could be the strongest showing for a UK jazz act in the albums chart for some years. For Bell, a Top 20 placing for Where I’m Meant To Be would equal success, but he’s more interested in “bringing them [away from] that jazz label, because the album really does transcend genre.”

Bell said that the UK jazz scene is now establishing itself more firmly in the mainstream. It follows Top 50 chart success for Concord’s Nubya Garcia, as well as Mercury Prize recognition for Sons Of Kemet, Moses Boyd and Seed Ensemble.

Ezra Collective are currently on the A List at BBC Radio 6 Music with Kojey Radical collaboration No Confusion. And they are not a jazz anomaly for the network.

“Every other week, there will be a UK jazz or jazz-adjacent artist in the charts or being supported across major radio, streaming and TV outlets,” said Bell.

“When you look at the other projects that the members are involved in, from Femi [Koleoso, bandleader and drummer] with Gorillaz to Joe [Armon-Jones, keyboardist] playing with Nubya Garcia, joy is a concept that permeates everything they do,” he told Music Week. “Finding ways to work that into the campaign has been amazing.”

Partisan has been able to implement a range of new opportunities for Ezra Collective on a global scale.

“We’ve been able to elevate the promo opportunities and continue that upward movement,” said Bell. “It’s a very global record and there’s a global audience. We see maybe even more avenues to market than with some of our other acts.”

Key to the label’s approach, Bell explained, was consolidating the visual world around the Ezra Collective record.

“We worked with an amazing creative director, Jeremy Cole, and that’s translated to outdoor marketing and all the advertising and single art,” he said.

A crucial part of the label strategy is translating locations where the group have built a strong touring business, such as the UK, the US, France, Benelux, Germany, Asia and Australia, into successful spots for their recorded work, too.

Building the connection with the band’s live reputation has seen indie retail come into the picture through a series of in-stores and launch shows, too. There’s also an aim to both consolidate their success on BBC Radio 6 Music and bring Radio 1 into the picture, while also aiming for TV opportunities with the guest features on the album.

DSPs are also on board for this campaign. The album’s lead single Victory Dance is at around 300,000 plays on Spotify, where the band have 568,364 monthly listeners. Their biggest tracks on Spotify are What Am I To Do? and Reason In Disguise, with over 10 million plays each.

“We’ve got the band their first few New Music Friday inclusions and playlist covers across not just jazz playlists, but a lot of other more mood-based playlists and we’re expecting that to continue,” said Bell.

YouTube provides a specific opportunity on the back of the video assets the band are creating.

“These days, visual content is really leading the story, even in some ways beyond the music,” said Bell. “We’ve got a nice opportunity to really bring both together.”

Subscribers can read our interview with Ezra Collective and their team here - or pick up the latest issue of Music Week.