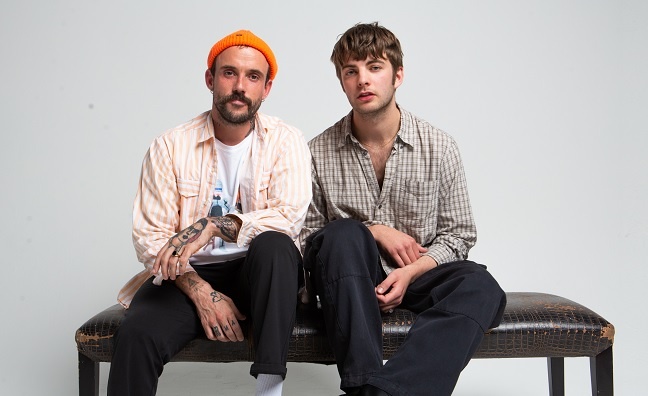 Independent label Partisan is set to make a major impact in the second half of 2020 with its biggest-selling UK and Irish acts releasing new albums.

In the latest edition of Music Week, international general manager Jeff Bell opens up about the impact of Covid-19 on its release schedule.

The Brooklyn-based indie has new music from Irish band Fontaines DC (singer Grian Chatten is pictured with Idles’ Joe Talbot), whose sophomore album A Hero’s Death is out on July 31. That is followed by Idles’ third album Ultra Mono on September 25. Laura Marling has just released the physical edition of Song For Our Daughter.

With physical sales rebounding back above 20% of the overall market, Partisan is now well placed to score strong results across its release schedule in the second half of the year. But Bell admitted there were fears about the impact of coronavirus on the company early on in lockdown.

“We were very concerned looking at physical retail, because that's such a big element of a lot of our artists,” he said. “Since then, retail has opened back up. I think the entire UK industry has been quite pleasantly surprised at how well physical retail has bounced back.”

During the lockdown, Bell said the label has taken various measures to support staff working remotely.

“The other thing we've done has been actively encouraging our staff to engage in social and political activism on company time,” he said. “It's something we feel very important about as a company, but also it means that they’re not using their own time to do it.”

Despite the challenging period for artist campaigns, Bell stressed that the label still has global ambitions across its roster.

“We absolutely take a global perspective on all of our artists,” he said. “Cigarettes After Sex’s first two records have collectively surpassed one million global sales. That in itself is a solid number for an ‘indie’ act these days. But the particularly exciting metric for us is that their three biggest markets – US, UK and France – make up less than a third of that number, meaning the band's international reach, particularly in Asia, India and Latin America, have allowed us to develop an exciting international network across these territories.

“It’s a network that we have invested time, energy and resources in, and are now seeing the results across the roster, including Idles, Fontaines DC, Laura Marling and, importantly, the incredible Fela Kuti catalogue.”

Following Marling’s Union Chapel livestream, Partisan confirmed that there are plans for ticketed virtual gigs from both Fontaines DC and Idles, who are selling album and livestream bundles. In the absence of touring, the label has been forced to adapt its international strategy.

“Obviously, a lot of these markets are very strongly tied to a live plot, which we try to take an active hand in planning,” said Bell. “So the pandemic has forced us to get creative with how our artists engage with these territories – be it localised content creation or being flexible with promo access across timezones – until touring can resume, which is never a bad thing.”

Laura Marling’s album was one of the first to be impacted by the Covid-19 pandemic, as the singer opted to bring forward the album as a digital release in April – the reverse of the trend for releases to be pushed back at that time.

“She wanted to bring it forward because of the epidemic,” said Bell. “She just wanted fans to have it as a source of comfort.”

The label is hopeful of a Hyundai Mercury Prize nod when the shortlist is announced on July 23.

“The critical reception has been incredible,” said Bell. “It’s one of the strongest, if not the strongest, records of her career. She is quickly becoming the elder stateswoman of her generation of singer-songwriters, which is crazy because she only turned 30 a few months ago. I think that is just a testament to the level of her artistry.”

According to the Official Charts Company, Song For Our Daughter has sales to date of 7,977, although it’s set for a new chart peak this week with the release of the physical edition three months after the digital launch. The LP will have a staggered physical release worldwide over the next month because of the logistics of rolling out an international vinyl release.

“It certainly wasn't planned, it was originally planned for an August release, and it was going to be a very traditional campaign in the lead-up with a lot of touring scheduled,” Bell told Music Week. “There were going to be multiple singles that we worked at radio, so it would have been relatively traditional in that sense.

“But to Laura's credit, she made the very early and correct decision to get the album into the hands of fans, so they could just live with it. She was very cognisant of the fact that the physical side of things would be a little more unorthodox the way it was rolled out. A big piece of the narrative of the whole campaign was just making the music available as soon as possible.”

To read the interview with Partisan’s Jeff Bell, subscribers can click here.