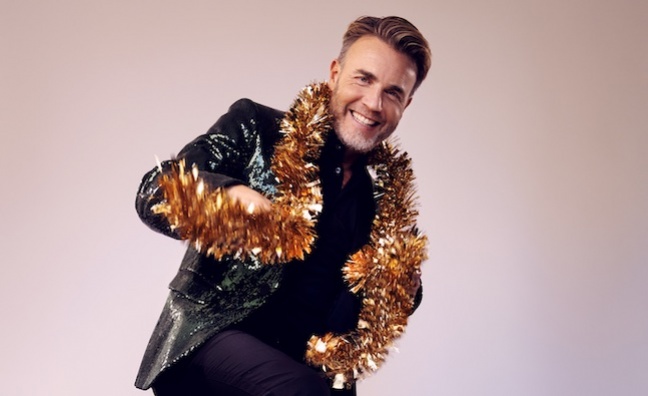 Featuring a mix of timeless classics and original compositions, the Take That hitmaker and Music Week cover star's new seasonal record, The Dream Of Christmas, came out via the label on Friday (November 26).

It is the latest in a host of Christmas albums to drop over the last decade following the success of Michael Bublé’s 10x platinum 2011 LP, simply titled Christmas. The 10th anniversary edition sent Bublé's album back into the Top 20 on Friday.

“Christmas music is has changed with the advent of streaming," said March, speaking in the latest issue of Music Week. “The Christmas song has gone from being a bit of a novelty, to dominating – especially in the UK. I mean, people start streaming Christmas songs from October, as mad as that sounds.

Acts such as Robbie Williams, Kylie Minogue and Dolly Parton have made Yuletide records in recent years, while Wham! and Mariah Carey both landed No.1 singles in 2020 with decades-old favourites. Moreover, 26 of last year’s Christmas Top 40 singles were festive tracks, including new recordings from Jess Glynne, Justin Bieber and Liam Gallagher.

"I remember saying to artists over the years, ‘Will you do a Christmas song?’ and you'd get a bit of a sneer," added March. "There were a couple of classics, but very few others. Whereas now, with the rise of global streaming and voice activation, it’s become its own genre.

"Artists are excited to work on a Christmas song and you can see the upside in both the creativity and the revenue.”

Mortimer described the modern craze for festive tunes as "unstoppable".

"We can all see what's happened and it just gets earlier and earlier each year - and more and more dominating," he said. "But as to why, I don't know. Maybe it's the ease of having them all in your pocket now? You just jump to a playlist really easily and off you go."

Barlow's manager Chris Dempsey of YMU Music also weighed in on the trend.

“You're hitting more casual audiences at that time of year,” he said. “People are playing music at home and they are being served a whole bunch of Christmas songs on playlists. I think that's helped them reconnect with some Christmas classics.

"As those streaming numbers have gone through the roof, a few new songs have started to come through and connect too and that’s the dream for a number of songwriters and artists – to write and record a song that becomes a returning Christmas classic.”

Subscribers can read the full cover feature with Gary Barlow and his team here.