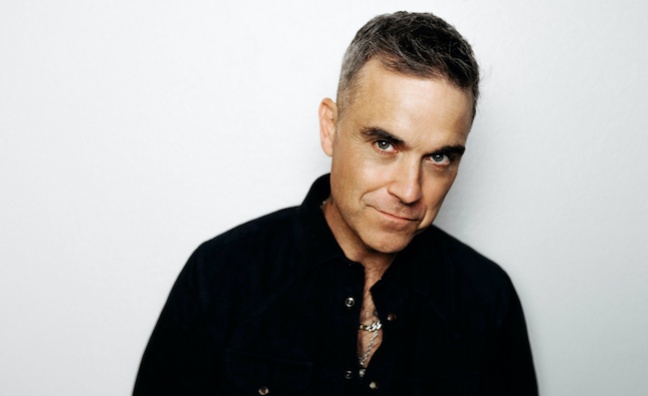 Robbie Williams has debuted at No.1 with his latest album XXV and landed a new chart record.

If you count his five No.1 albums with Take That (including 2018’s Odyssey which features hits from his time in the group), then Williams is on 19 chart-toppers. Paul McCartney is the frontrunner with 23 No.1 albums across his career in The Beatles, Wings and as a solo act.

Robbie Williams has also helped Columbia Records secure an albums chart hat-trick with the Top 3 positions - the only time a label has achieved that result in the 21st century. Ozzy Osbourne and Harry Styles completed the Top 3.

Ferdy Unger-Hamilton, president, Columbia UK, said: “This is a testament to the three legendary artists and the great albums that they have made. Robbie and Ozzy have made fantastic returns, and I think the world knows just how good Harry’s House is by now. Great job by the Columbia team too - we are all very happy.”

Robbie Williams’ XXV debuted at No.1 with sales of 37,925 (including 36,766 physical copies), according to the Official Charts Company. It had the fifth biggest opening week of 2022 so far.

The LP celebrates 25 years of Williams as a solo artist and features multiple No.1 singles alongside fan favourites, all newly orchestrated by Jules Buckley, Guy Chambers and Steve Sidwell, and re-recorded with the Metropole Orkest in The Netherlands. XXV includes new single Lost, while the deluxe edition features three more original tracks – Disco Symphony, More Than This and The World And Her Mother.

Robbie Williams said: “Thank you to everyone who’s supported the album: everyone who’s bought it, streamed it, downloaded it and reviewed it. I’m so pleased that it’s gone to No.1, and whilst it feels strange to be receiving an award during these sombre times, I wanted to thank you all for your support and dedicate this to the fans, who I never take for granted. I really appreciate it, thank you so much.”

Williams has previously made No.1 with two regular hits collections. His only studio album to miss the summit was 2009’s Reality Killed The Video Star, which peaked at No.2 after a close battle with JLS. Robbie Williams’ biggest album is 1998’s I’ve Been Expecting You with sales to date of 2,611,523.

Fellow Columbia artist Ozzy Osbourne made No.2 with Patient Number 9 (14,124 sales) - the rock icon’s highest ever chart position as a solo artist. Osbourne’s 2020 album Ordinary Man peaked at No.3 (36,660 sales to date).

Columbia’s two new LP entries this week were followed by Harry Styles’ Harry’s House, which was down one place at No.3 (7,559). Harry’s House is the year’s biggest-selling album to date (356,352 sales).

Click here to read our 2019 cover feature with Robbie Williams.