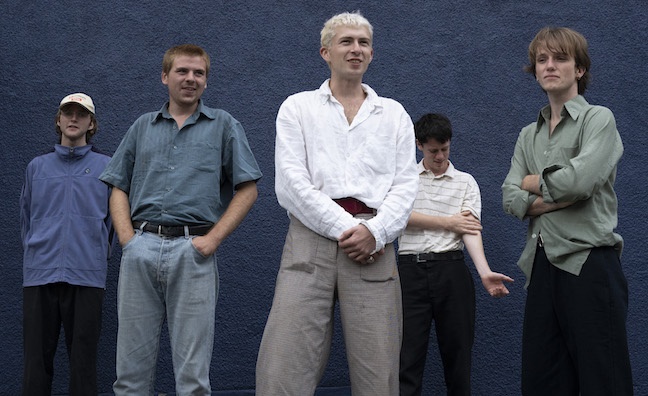 Shame have returned with Drunk Tank Pink (Dead Oceans), the follow-up to their acclaimed LP Songs Of Praise.

The indie punk band from South London made an impact three years ago with that debut album, which peaked at No.32. With sales to date of 21,120 (including 6,056 from streams), Shame are one of Secretly Group’s most successful UK acts of recent years.

But their trajectory was interrupted by the pandemic last year. With the band readjusting to the absence of live opportunities – a key part of their debut campaign’s success – Secretly Group pushed back the sophomore album into 2021.

The new single, Nigel Hitter, was recently aired on BBC Radio 1 as Annie Mac’s Hottest Record In The World, ahead of the album release (January 15) from Dead Oceans.

Here, Chloé van Bergen, Secretly Group’s VP of Operations for UK/EU, opens up about Shame’s big plans for the year ahead…

How is Secretly Group working around a lockdown that wasn’t part of the original plan for this January release? What’s the strategy for indie retail?

“It won’t come as a surprise to many that we repeatedly bumped back the release date of this record to a time when we expected to be past the peak of the global pandemic, and back to a certain sense of normalcy. So suddenly finding ourselves releasing this record in the first week of a newly instated lockdown was certainly not within our initial expectations! We did shift gears well before the turn of the year, however, and made many creative and commercial decisions that would soften the effects. Things like honouring in-store performances and moving those onto a virtual forum, filming independent live sessions and setting up a whole rota of multi-disciplinary and guest-led broadcasting events under the brand of ‘Shamestation’ have all been part of this revised tactic.

“As for independent retail, they are the heart and soul of what we do and who we are as a collective. It’s been hugely important to us to build a retail campaign that would incentivise fans buying their copies from these community-building shops. If they prosper, then so do we.”

Is Drunk Tank Pink a step up in terms of the songwriting and recording?

“Hugely so, Drunk Tank Pink presents a big leap from their debut in every sense. The band were mere teenagers when they wrote Songs Of Praise – an often overlooked fact is that the lead single One Rizla was written when they were 16. On the flipside, for this new record they were able to bring a whole bundle of acquired experience and maturity to the songwriting and recording process, largely because of their growing age and having developed wider musical interests but also due to a renewed understanding of who they are as a band. The label was able to give them time and space to regroup and re-centre their creativity, which enabled them to fully develop all the concepts that went into the making of this record. We couldn’t have asked for a bigger step up from them!”

The band worked with Arctic Monkeys producer James Ford – how did that pairing come about and what does he bring to the record?

“We’re delighted that James Ford came onboard. He was a fan of Songs Of Praise and saw the band play at their Kentish Town Forum show. It felt like he’d be a great person to concisely pull together all the ideas the band had floating around and elevate them, and frankly his history of working with ambitious bands speaks for itself. They got along like a house on fire from the very first meeting, so it was a no-brainer.”

Shame made a chart and sales impact with their debut – what are the ambitions for the follow-up?

“We’ve had our eyes set on a Top 10 since the inception of this album campaign. The band did such hard work during their debut in capturing a serious, dedicated fanbase who have been incredibly receptive to their new material, and this has translated into a large volume of pre-orders.

“We need to be mindful about the challenges our industry is facing right at this moment with the newly instated lockdown. With a live plot indefinitely on hold, our principal efforts have been focused on both bolstering the band’s D2C offerings and also working closely with our cherished independent shops, who are struggling as they can’t keep their doors open to the public. It might be that we can’t make up the numbers that we would normally see in a first week of sales through the high street with streaming, but we are definitely keeping up the fight!”